THE LEGION OF SUPERHEROES

This is the next installment of the Legion series I mentioned last week. It's a better view of the Legion of Crime...Super Girl and Ultra Boy, The Iron King, Colossus, Brainiac, The Spectress etc.

I like covers with narrative but this one lent itself to a pin-up. The narrative will return next issue...

I've almost finished the colouring on the first issue...hoping to get it printed next week. I'll post a photo of the finished issue! 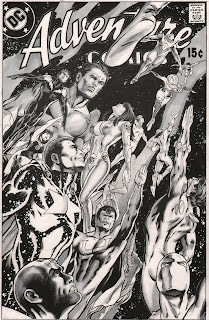 I used a little tone on this cover, it just added a lot more depth...

THE LEGION OF SUPERHEROES

This piece is the first in an ongoing commission series. In a nutshell it's the Legion as I'd like to see it. Back when I started reading comics, when I was 8, I'd draw Legion covers. I never did the interiors, just covers. My Dad would bring home a stack of A4 photocopy paper for me to draw on. Weirdly I can still remember the feel of the paper, the smell of it...but anyway, it's a top three memory from my youth.

Straight away I'd fold the paper in half, it was usually about 50 sheets Id get, so it was a reasonable amount. Then I'd draw up the logos, always the Legion, and the DC bullet, the issue numbers and get to work drawing the Legion in all the situations I wanted them to be in. I introduced new members, always reintroduced Invisible Kid and Ferro Lad, killed off a few who I wasn't keen on, the usual fare for a kid. Sometimes I'd get to colouring them too, using Berol felt tips (awesome, still have them now, seriously it's the best felt tip of all time!).

So, now we come to this commission series. I've been given the freedom to do what I'd like with the Legion again, and I even get paid! So, I'll post each new one here, hopefully one a month. I've started off drawing in a classic style, something near to Mike Grell (I'd say my favourite Legion artist). I think the art style will morph, eventually, into my own drawing style. I guess I just wanted to establish the series as one that harks back to a time when the Legion was great.

I'll be colouring the covers too, in time, but not with felt tips. I may use watercolour...or I may do it digitally, if I can figure out how to make it look like comics used to instead of the murky, grey...let's leave that sentence hanging there.

So, issue one of Adventure comics (the commissioner's preferred Legion is the original Swan series). The title is obviously from Star Trek. Here we have the Legion facing off with the Legion of Earth 3, the Legion of Crime...

'The Legion of Super-Heroes, back in their series, come face to face with the greatest foe yet, themselves!' 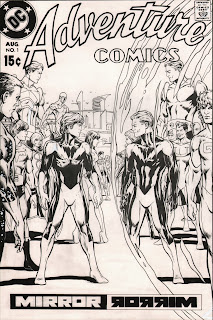 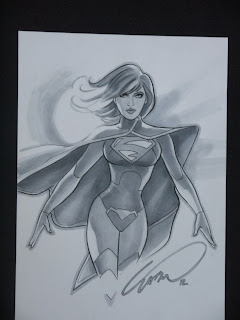 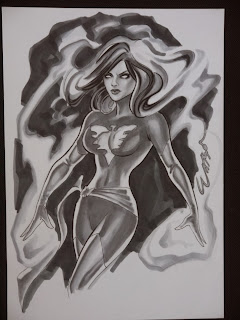 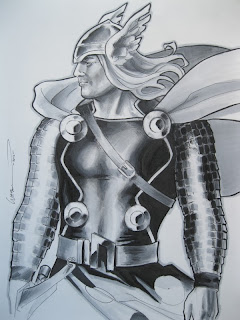 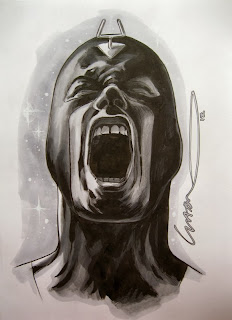