The pumpkin bombs were probably the hardest thing to paint so far...I mixed the orange using Alizarin Crimson and Indian yellow with a touch of Gold Ochre and white. I didn't want to use a red that was too saturated as I still have Spidey's costume to paint...Still need to think about depth. The glider was done without reference, like the bombs...these things obviously aren't everyday objects. The explosion was done using pretty much the same palette, Alizarin Crimson, Paynes Grey, Indian yellow and Titanium White. I just started painting it without a plan and it came out pretty well.

One great thing that happened to me at this stage of the painting is Mike Collins introducing me to the joys of Audible.com...I like to listen to something whilst I work (or have DVD's on in the background) and audiobooks, always unabridged, are just the thing. Previously I had one set of audiobooks that I converted from cassette onto CD, the Warlord trilogy by Bernard Cornwell, but it disappeared when my last laptop died suddenly...and I must have listened to it 20 times...so to sum up, Audible, great. 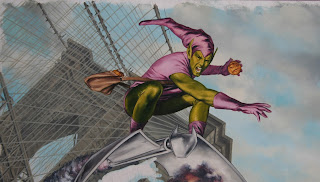 Now we get to the more exciting parts. I started painting the green, starting with the ear...I always start with the ear or left eye for some reason. I like to use Sap Green, a nice rich colour but one that has a lot of oil in it. As a result it's quite translucent, like Indian yellow (which I also used here) so I put some Gold Ochre in there to thicken it up. For the darker tones I added some Winsor Blue and Burnt Umber...and then the highlights were where I threw in the white also. I find if I use white in the mix too soon then it washes out the colour too much.

The Goblin's hat and tunic is a difficult one. In the past I used to do it in more of a purple...but, and we're talking the proper version of the Goblin here...not the post clone one...there's actually a lot more Magenta/pink to it. So, I used Alizarin Crimson with some Old Holland's Oil Mangan Violet-Blauwachtig for the base colour. Darks were done with Winsor Blue and Burnt Umber, the highlights I added white.

To get a smooth finish I use a fan brush. If you delicately brush the paint from one tone to another it smoothes out the gradation nicely. Also, when doing highlights if you add a lighter colour then use the fan brush and repeat over and over it makes a pretty convincing shiny lycra/spandex costume. 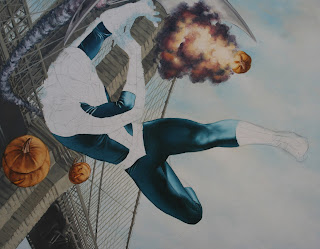 This is painted using Winsor Blue (red shade) and Burnt Umber with Titanium White. I actually add some of the brown into the midtone too as it makes a more realistic looking blue than just using the blue straight out of the tube. I like to mix every colour I use, very rarely using it straight out of a tube, but this means I have to paint everything I'm using that colour for in one day as it's hard to replicate the exact colour again.

Using a slight outline on the figures makes them pop out of the background and create depth in the painting. Often it's just a very thin line as it just looks unrealistic if it's too thick. It's a technique that Norman Rockwell used brilliantly. I had to go back at this stage and make parts of the glider darker too as it was too similar in tone to the sky. At this point the bridge has really receded into the background. All the detail is there, which makes the piece seem realistic, but it's incidental to the action in the foreground now...which is a good thing. 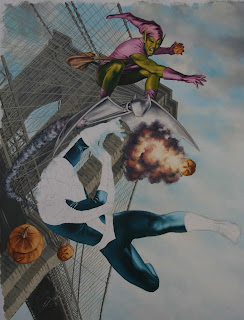