As usual the weekend was great. The attendance was impressive, possibly more people there than last year. The staff were visible, well organised, friendly and helpful and everything ran smoothly. It's the same each year, and what everyone has come to expect!

I attended again with Russell Payne. He was there to do a panel about Jack Kirby with Dave Gibbons, Tim Seeley and Jonathan Ross, I was there to sketch. I'll talk about the weekend as a whole and the now regular fail of a journey in a moment but first...

Thanks to everyone who came over to say hi, buy some art, or pick up a commission. I hope everyone was happy with what they got! I surprised myself by doing a half decent sketch on Sunday. Thanks to Malcolm for the Star Trek goodies, awesome! And Ole for the chocolates.

I got to chat with Neal Adams! Adams is my favourite comic book artist. I sometimes try and pretend I like other artists more but it's a lie. Adams influenced every artist at the con in some way. His first stint at DC is, for me, the most creative and exciting era in comics. Anyway, it was a good start to Saturday morning! What a nice guy.

I also got to spend 5 minutes with Brian Bolland before the start of the con on Sunday. Loved his work since I first saw it on the cover of JLA 190 (I didn't read 2000AD so this was my introduction). Again, a great guy!

And finally, I managed to grab a few minutes with Paul Levitz. He signed my Great Darkness Saga page and reminisced about the Legion a little before asking me if I was wearing a Windy and Willy t-shirt. The man knows what he's talking about! Again, it's the same theme, what a nice guy!

I'd recommend LSCC to all fans, whether they're looking to dress up, get some comics, an awesome choice from comics for 6p to top end key issues that are more valuable than my car, or get some nice sketches and original art. It's got something for everyone. It's, in short, a proper comic con...

Last year Russ and I stayed in a hotel a fair walk away from the  Excel Centre where the con is held. Everyone else was at the other side at the Ibis so we decided to book early and make sure we were in the right place and could avoid the trek with all the art, banners, books etc we bring. Organised! Russ assured me that the journey would run smoothly as none of his family would be coming with us to be ferried about across London.

A few weeks ago that changed. His middle daughter, Rosie, it turns out, was traveling to London that day to visit his eldest, Chloe, now at University somewhere near Wembley (or maybe that's just where she lives, I didn't pay attention). She was going on the coach as we needed to set off early and the plan was to take her back after the con Sunday, 'it's only a short to trip to where Chloe lives.'

The journey was going well until we set off. We went by the art shop to pick up some stuff (pens for me, a t-shirt for Russ) and then Russ got lost looking for Tesco. He's only lived in Cleveleys (it's North of Blackpool, neither of us live in Blackpool) for 35 years. It took us an hour to find our way back on track after his horrendous decision to go right, fill the car with petrol, sort tyre pressure etc. 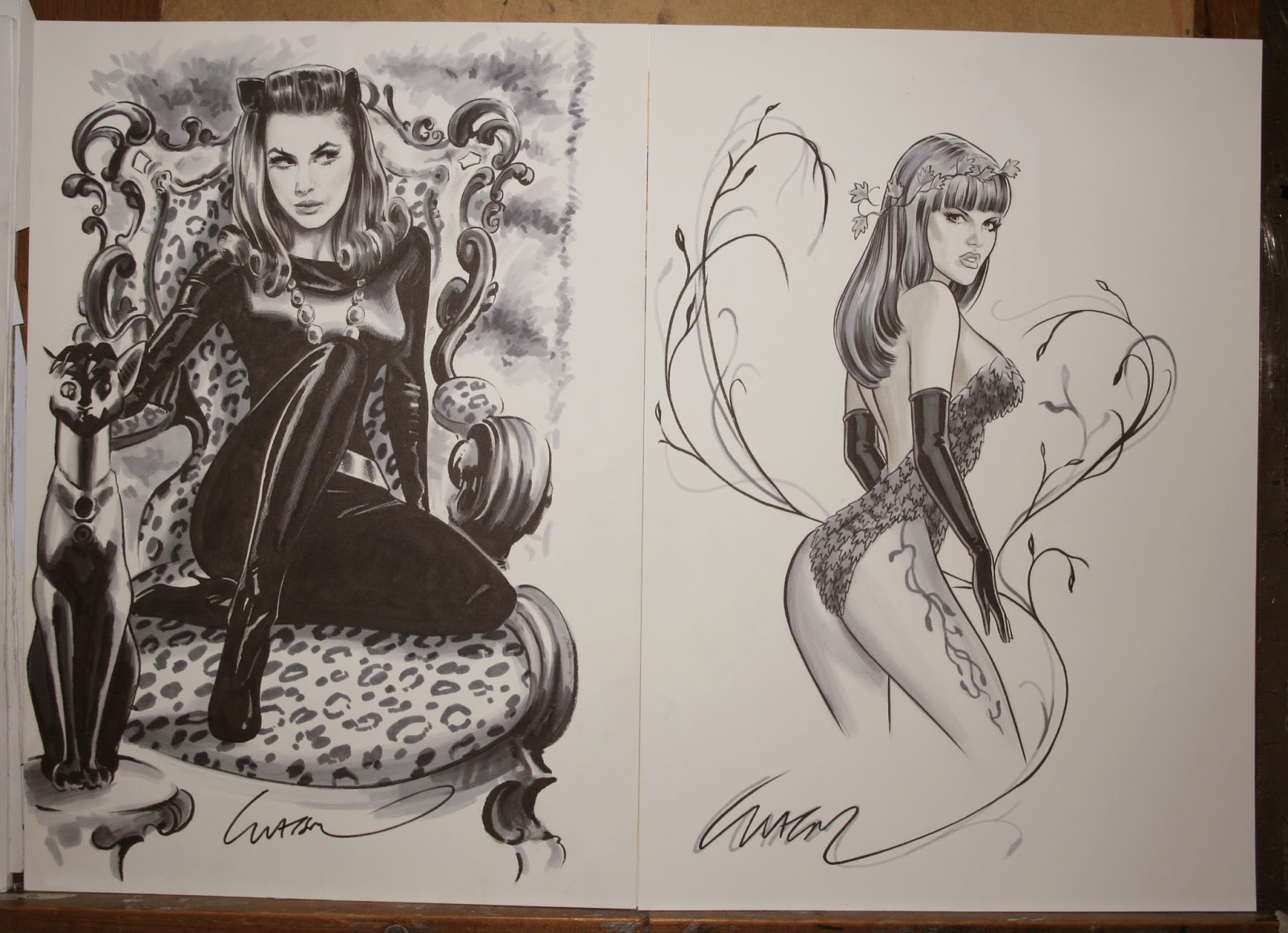 Julie Newmar and Poison Ivy A3 sketches I took to the con. I forgot to scan my sketches again and so took some quick photos just before we set off. See more examples dispersed throughout the account

The M6 was the usual set of roadworks but it was expected, we were ok with it. We were involved in an awesome chat about a project we're both working on.  Russ was driving quite carefully, he's only one more driving mishap from walking everywhere for the next 18 months. It's probably for the best anyway as when he brakes it sounds like a washing machine full of bricks is taped under the car.
I managed to navigate for us using printed directions. Neither of us cares for phones, I-phones or Sat Nav...well, I actually think Sat Nav is pretty nifty. Then for some reason we just sat stationary on a road headed towards the river for nearly an hour and a half. We were so close to the venue but stuck, for no apparent reason. It went dark as we sat there. Eventually we started moving again. Seven hours, door to door. Well, not quite.

The car had nowhere to stay...The Ibis didn't have a car park so we had to use the Novotel one next door. £16 a night. I left Russ to deal with that and carried a load of stuff into the reception. Russ couldn't negotiate, it really was going to be £16 a night. Russ was sure we'd only need to park there for 24 hours and it'd be ok, £8 a night. Even the most mathematically disinclined person can see the problems with Russ' reasoning, Friday, 18:30 until Sunday, 18:00 is not 24 hours.

We also had no breakfast booked. It was £16.50. Each. I really look forward to the breakfast at comic cons but not at that price. I'm not that affluent, or insane. Still, at least we could chill out at the Ibis bar where everyone was staying.
We ended up in the Novotel hotel bar as absolutely no-one else was staying at the Ibis.

Eventually our friends turned up after freeloading at the Diamond Retail event in the Aloft (where everyone, unbeknownst to us, it turned out, was staying) and we had a great time chatting about comics and art. I sold some sketches too so I was pretty happy. Sketch sales before the con starts are the best! They'd left the Aloft hotel when Jeff (see previous con accounts) almost got the bar closed through his reckless lunacy. 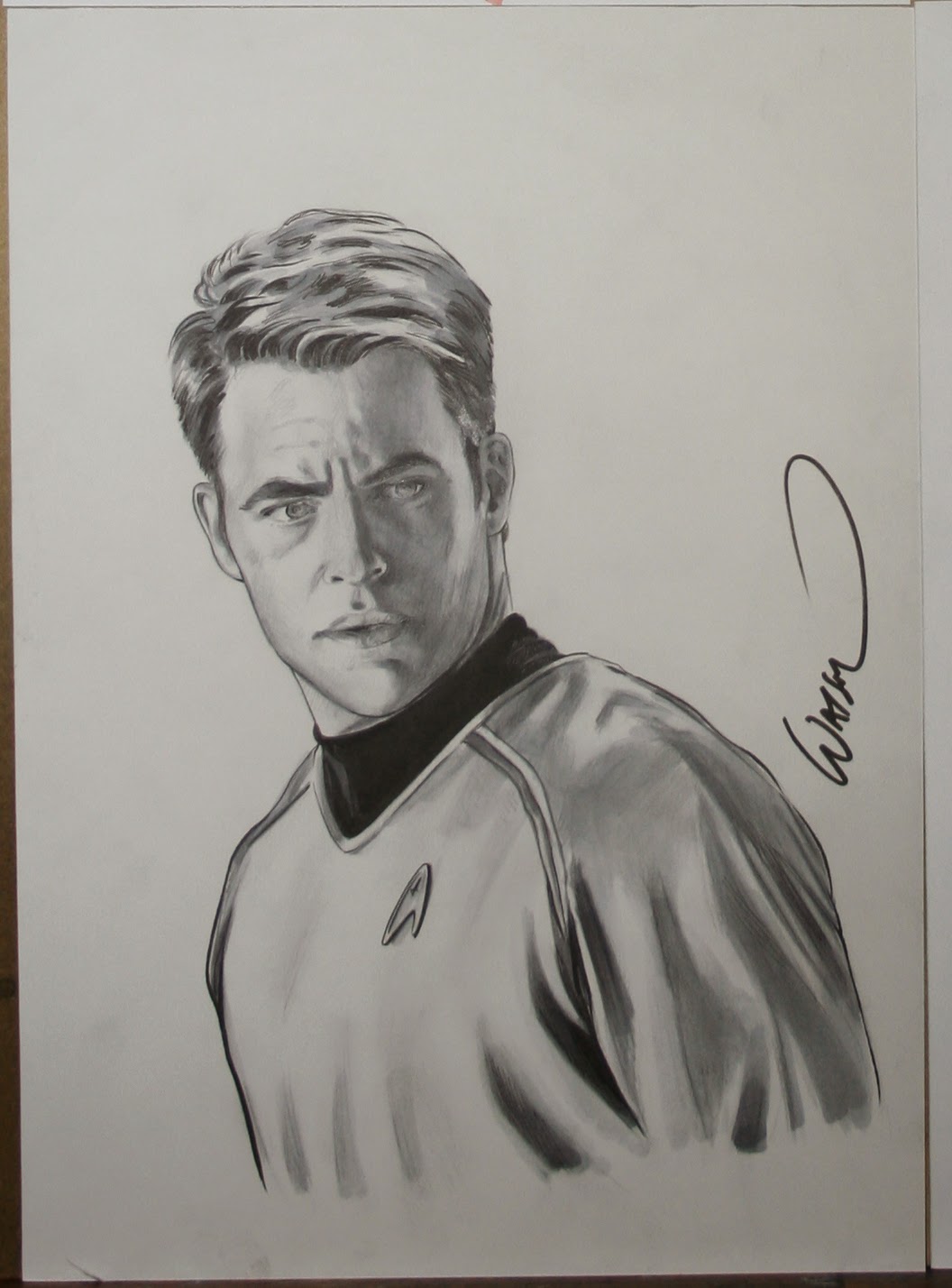 The next day we had a banana and a Jaffa cake for breakfast and set off for the con. Russ was alternating between arrogance and utter fear about doing the Kirby panel. I was already tired after spending late nights the week beforehand getting all the commissions finished in time for the show. This tiredness had been compounded by Russ' relentless snoring the previous night and it dawned on me as I set up the table that I'd be sketching all weekend half alive.

The day flew by. Russ' unease about the impending Kirby panel with Dave Gibbons and Jonathan Ross rose to the point where he tried to convince me that we should go home. He was delirious with fear. He mentioned faking his own death at one point. Up to this point in the day he'd only sold one print and financial ruin was staring him in the face. Eventually he became resigned to his fate and wandered off...


By all accounts the Kirby panel was well received. It was a positive look at Jack Kirby's career. Here's a link to Russ' version of the con...
Russ' LSCC account 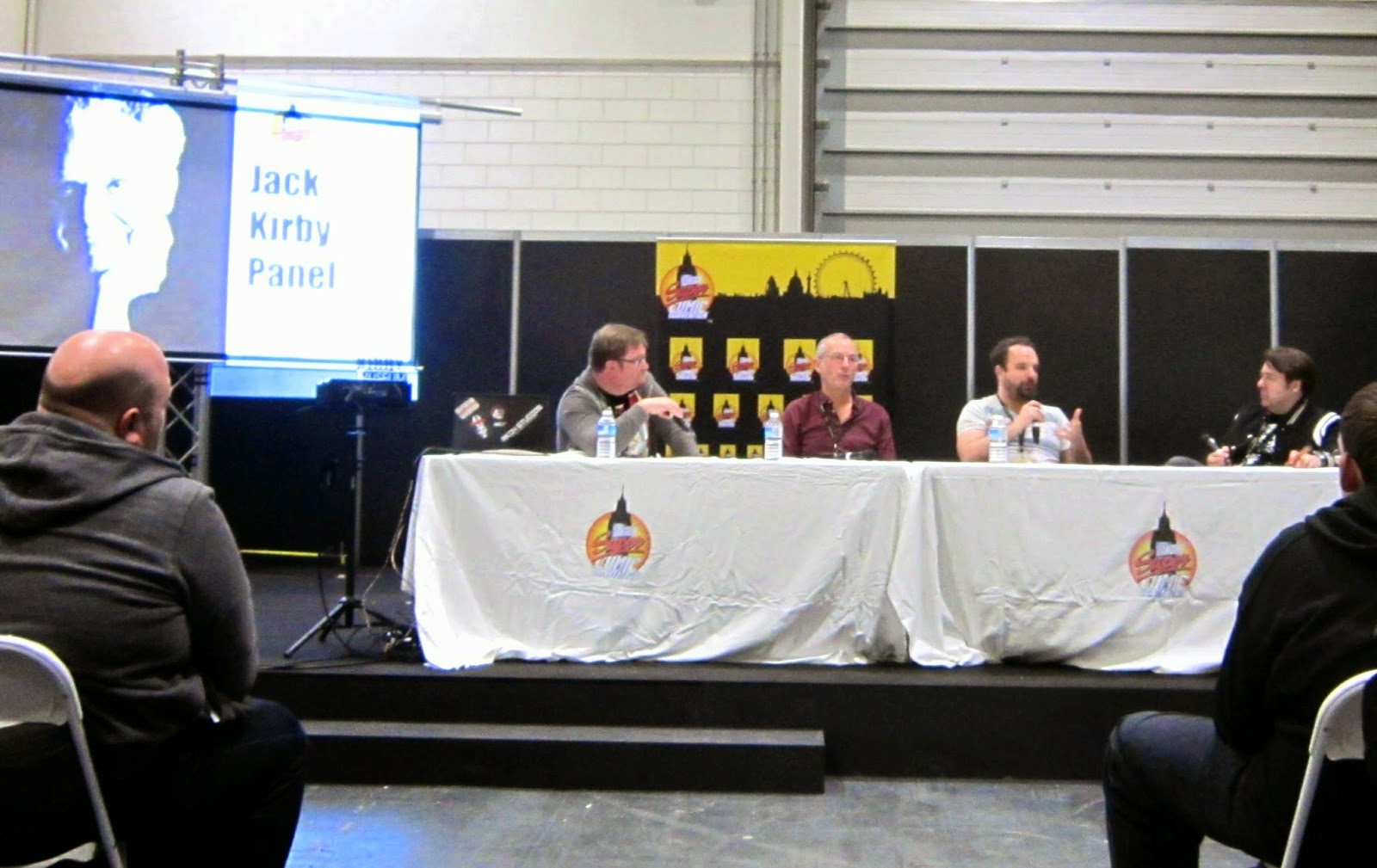 Russ came back less stressed and could now concentrate on selling prints. I missed the Kirby panel, having an inability to draw and talk at the same time I was working very slowly and had a lot to get through. For some reason I had a ton of sketch covers to do. I don't know why as, in the past, some of the worst sketches I've ever done were on sketch covers. Thankfully none of the issues I was given to scrawl on had that awful shiny paper covers that repel anything you try to draw with. 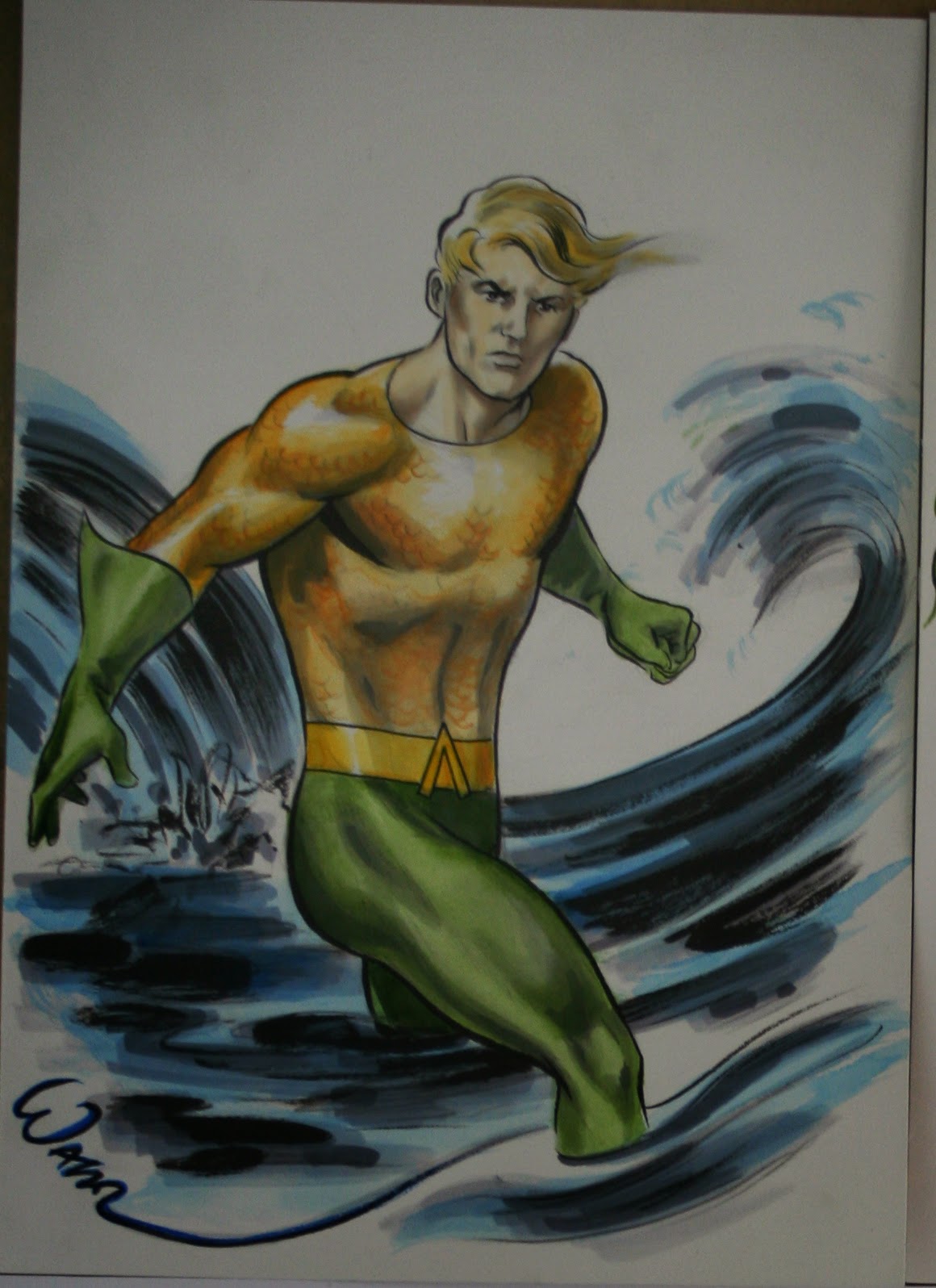 An A4 Aquaman sketch

I feel a lot of pressure at cons to draw well. I see other artists' sketches and often get unnerved at the quality. It's probably the main reason I sketch for free, then I don't feel as bad if it's rubbish...For some reason the con finished at 6 this time and not 7 as previously.

We decided to grab a quick Subway at the Excel and then head back to the hotel. It was, unfortunately,  the worst Subway I've ever eaten. And it cost a fortune. I know London is expensive but get a grip. 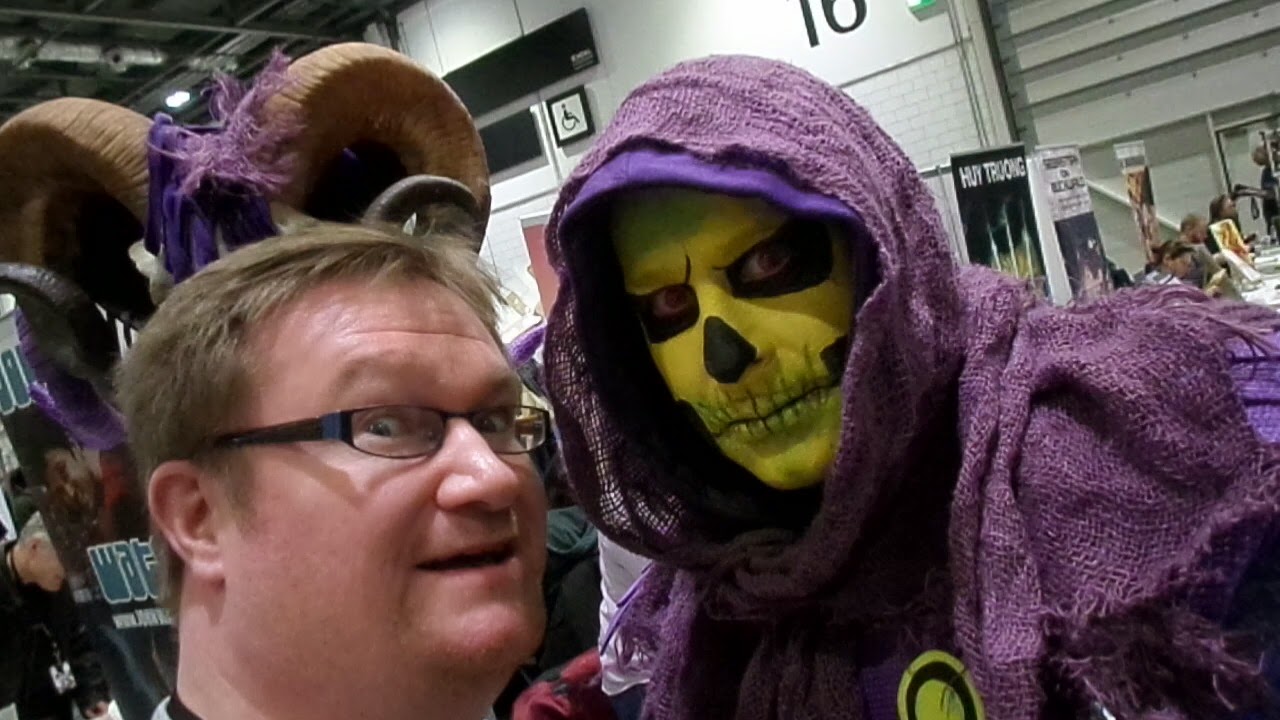 We spent a relatively quiet evening in the hotel bar chatting about art and comics. The main part of the evening consisted of saying an artists name and then talking about what sketch we'd want from said artist, at their peak. Sometimes the answer is obvious, for example John Romita Sr and Gwen Stacy. Sometimes an artist is nominated that you can't stand and then you have to pick a sketch you could sell on Ebay the next day. Sometimes one or two people don't know anything about the artist in  question and then they're mocked mercilessly. Back in the room I listened to Russ snoring again until I eventually passed out. Next morning, not having anything left to eat we headed over to the con hungry as well as tired. It was to be a theme for the day.

Russ, on one of his 'I'll be back in 5 minutes' wanderings bought and ate some kind of £57 brioche. I didn't get one. Bob from the Close Encounters team gave me a Wispa bar that I shared with Russ. See the difference? 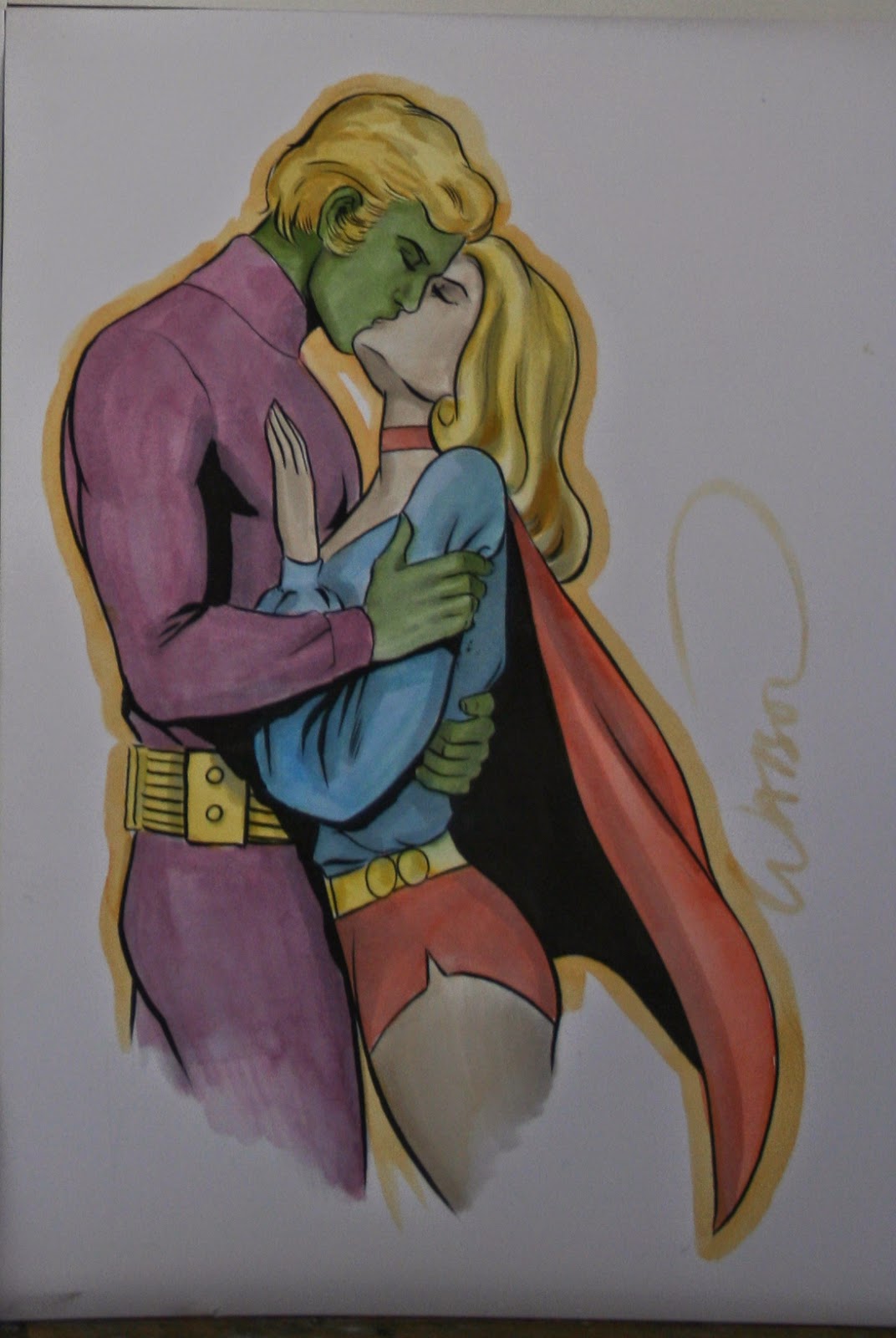 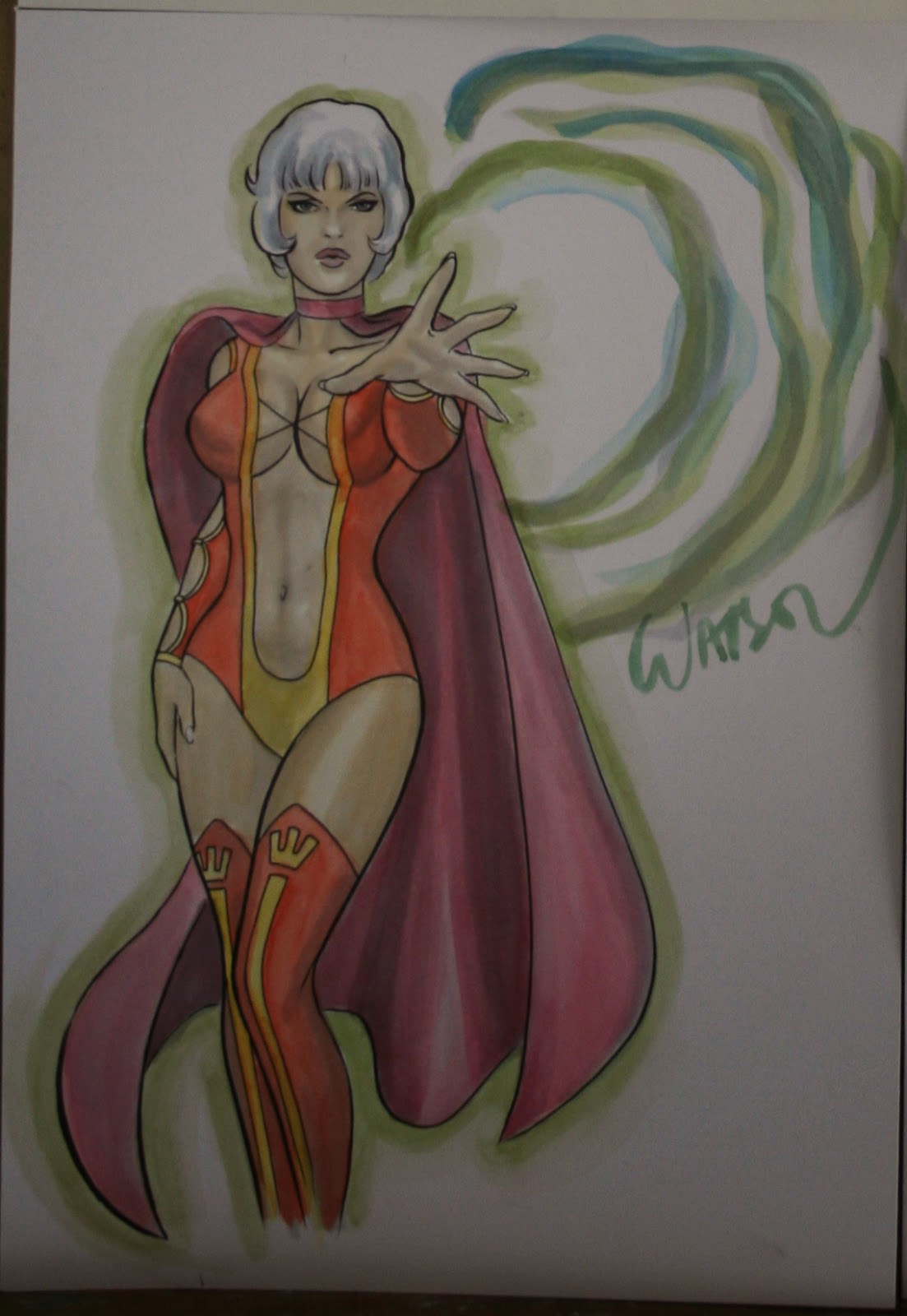 I decided before the con to draw a few Legion of Superheroes sketches, here are a couple of A4 ones that are based on some Grell interior panels

I forgot to mention, Russ is now a poet. Everyone he meets thinks he's joking but he isn't. He threw off the shackles of financial stability, holiday pay and  sick pay to become a bard. Centuries too late, obviously. Every con is now a serious quest for money. His stress levels rose throughout the morning as countless people walked past the table ignoring the large square headed, desperate man slumped at the table amongst the Kirby prints...the afternoon proved more fruitful however and the wolves have been kept at bay for another week. I actually quite like the Kirby print. 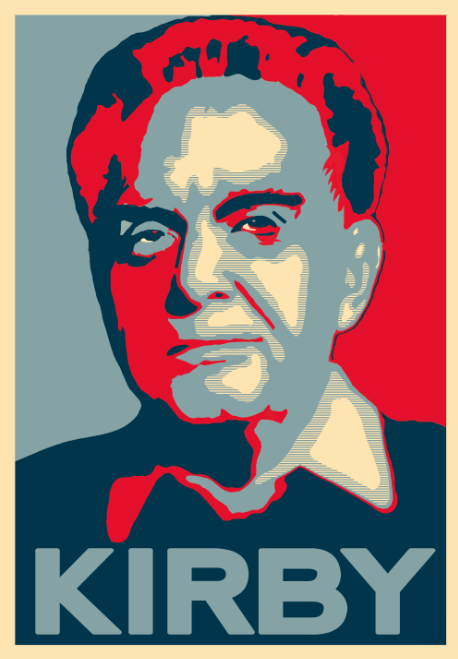 The Kirby print, now available as a t-shirt from http://www.cafepress.co.uk/jackkirby

I knew the journey to Russ' daughter's flat wouldn't go well when the directions in front of me seemed to be for an entirely different journey. We got lost 30 seconds upon leaving the Excel Centre. We had to use an A to Z of Britain to traverse through the city. We went over the bridge at least 3 times. Russ almost died on the journey but thankfully, at the moment he was about to capitulate to hunger, he remembered the Murray Mints in his glove compartment.

Eventually we made it to Chloe's place. I quite enjoyed the journey, we went through Southwark, a part of London I only know from novels set in Tudor times. I enjoyed Chancery Lane too.

We finally ate something of substance at about 8pm. Unfortunately the M6 North was closed for 3 junctions and we eventually arrived home at just after 130AM...45 minutes earlier than the last LSCC.

Here are a few more sketches to sign off with! 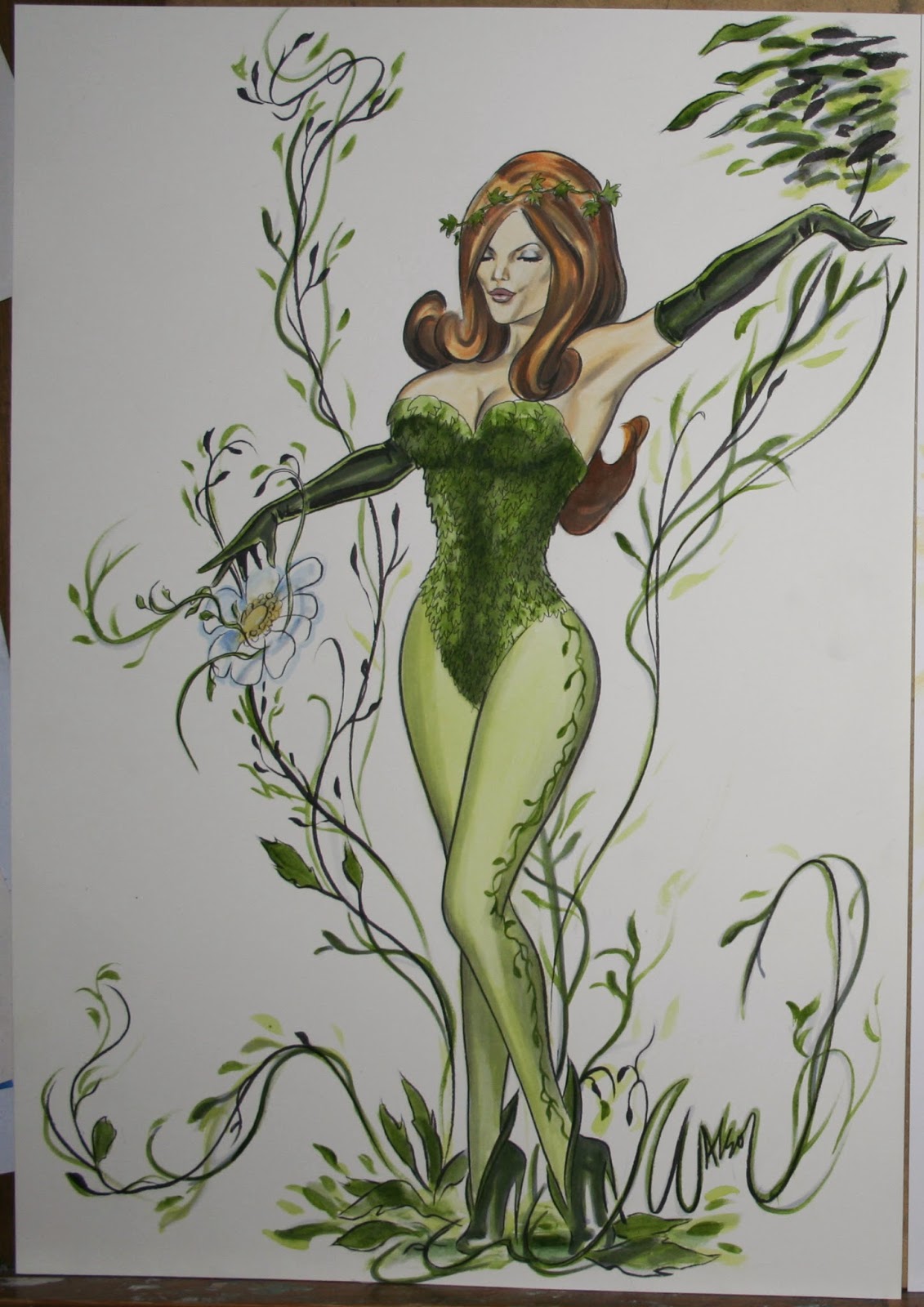 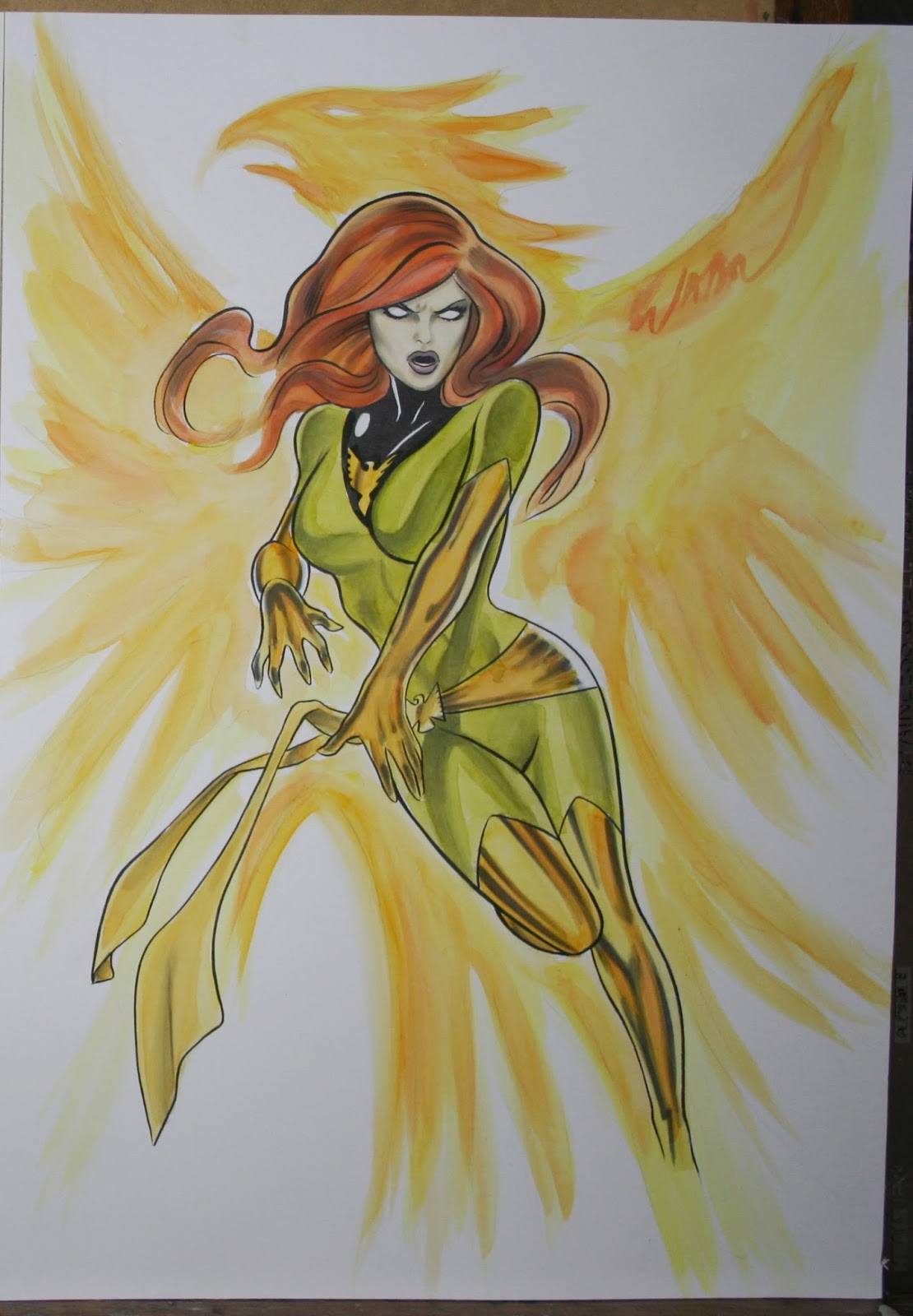 Some A3 colour sketches 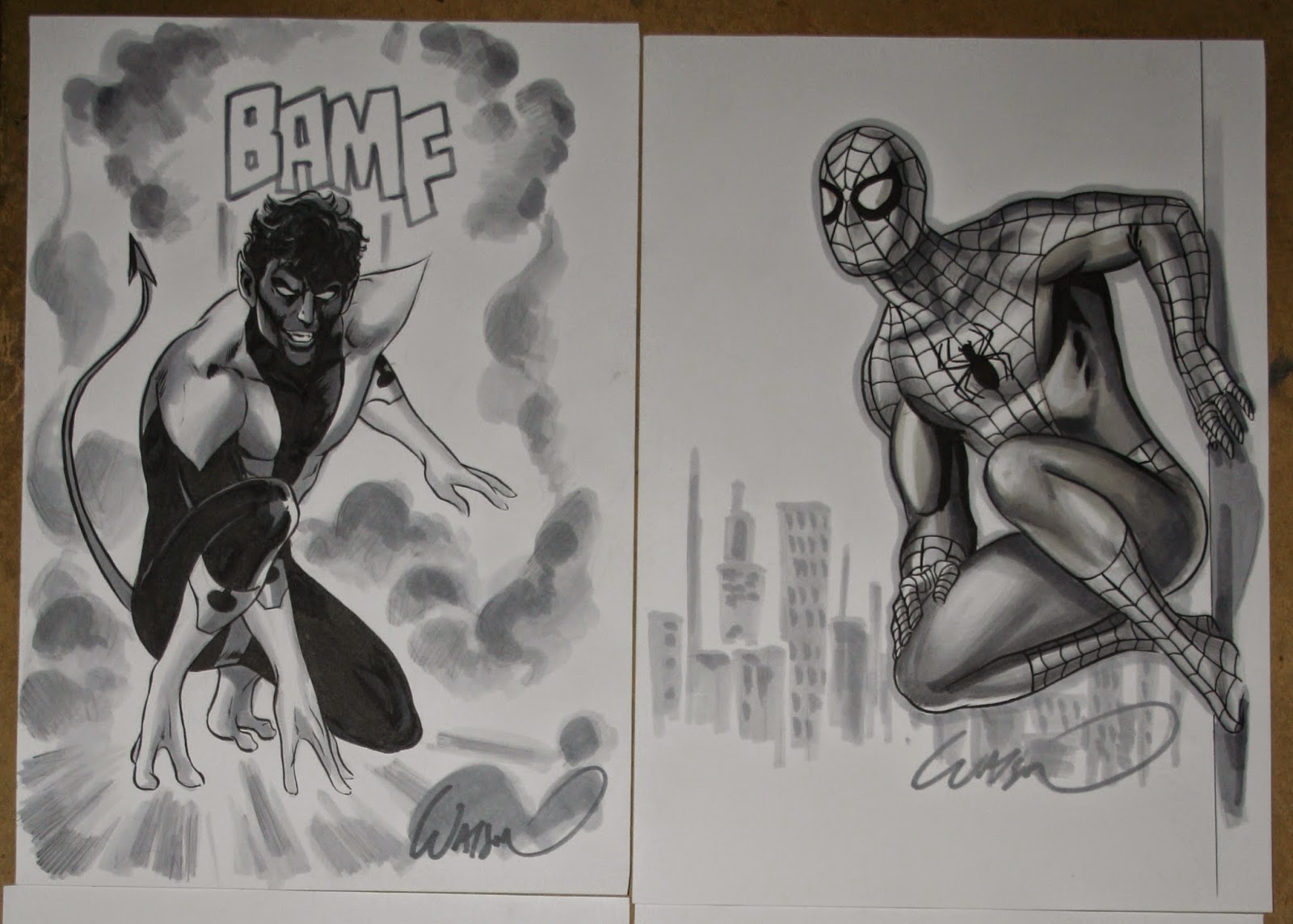 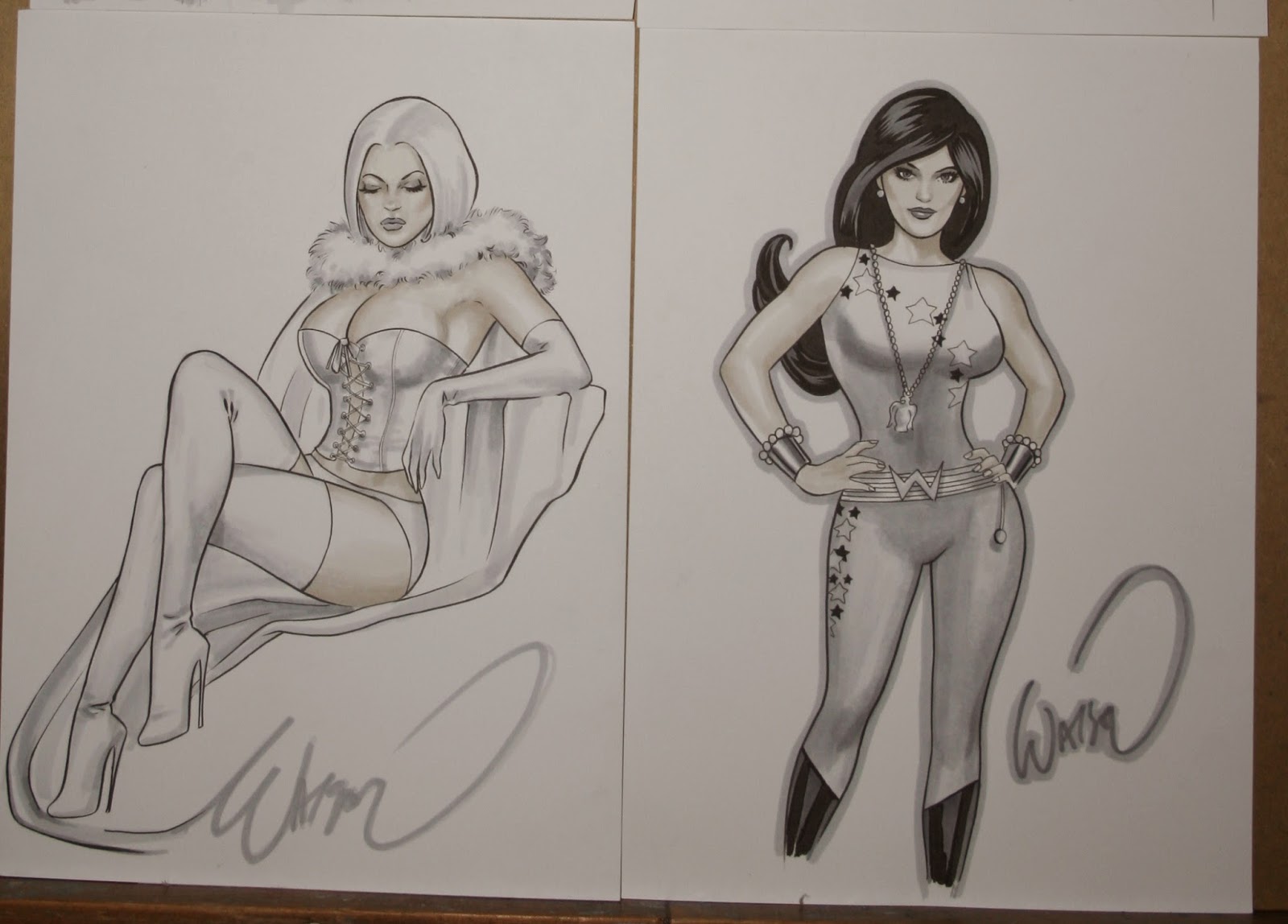 And some A4 sketches