First up, I drew a headshot on an X-Men blank sketch cover, it had some sketches on it already by different artists. I have the comic here. If the man who left it with me could contact me and tell me which con he'll be at next then I can sort out getting it to him! Just let me know which characters were already on it so I know it's you!

A hectic weekend. The con was packed, well some of it was, hardly anyone knew there was a level 2 on the Friday and much of the Saturday. There was a lift to get to level 2 where the comic zone was, but there was a 45 minute wait on the Saturday to get into it. The YALC con was advertised as being there though...some stairs appeared eventually and then quickly got clogged up. It was a lot cooler on our level than the others. People were thankful for that.

I met a lot of nice people over the weekend, many were sweating from the heat, signed a lot of comics, mainly Hulk and Civil War.

I finally got to meet Geoff Johns when he turned up for an hour on the Friday to see Gary Frank. I worked with Geoff on Hawkman and we'd exchanged phone calls, emailed etc but had never met. Very nice man!

I shared an alcove in the comics zone with David Roach, Laurence Campbell, Roger Landridge and Lew Stringer. It was good to get to know them all better and share experiences about the industry. All great guys and talented artists. 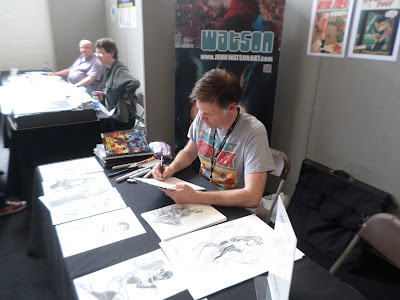 Me sketching, Lew Stringer and David Roach in the background

I enjoyed seeing a Leonard Nimoy impersonator. He was awesome, remained in character and had the voice spot on, replying to questions as if he were Spock. He was really tall too! I had to have my pic taken with him... 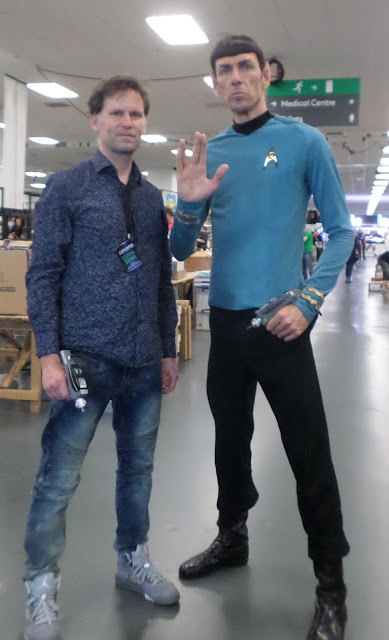 Myself and Mr Spock

This year the actual journey was pretty straightforward. I went with Russ Payne again. We had to set off at 6am as the show began at one on the Friday so I was pretty wrecked before we got to the hotel. We stayed near Chiswick at an independent place called Brook Hotel. Awesome. The tube took us to near the Olympia where the con was. It was a pleasant walk, for me anyway. Russ walks like a giant old man. When we arrived we took some time to find level 2, none of the staff downstairs knew where the comics zone was. I walked past a lot of cool merchandise which I unfortunately didn't really get to browse. Biff's jacket from Back to the Future was on display. Awesome! Russ was given a table in a different alcove. I could have moved to the one next to him but I stayed put as I'd already had people come up to the table, ask for sketches and then leave to pick them up later. So I didn't see much of Russ at the con. We ate, rather late, in a pub. It was full of cosplayers, a great sight in a pub full of civilians!

It turned out that the hotel we were in was round the corner from a friend's flat. He has an empty fish tank in the living room. It used to contain an axolotyl. Apparently when they're ill you put them in the fridge. Unfortunately it didn't work the last time...

Saturday was another early start, 9am. It was pretty much like Friday. Except Russ started sketching again. Recently he's become an internationally acclaimed artist. It happened by complete chance after a local newspaper ran an article that mentioned he drew the X-Men and Captain America for Marvel Comics. Another local paper picked up on that and, as he was exhibiting some work in an arts exhibition, proclaimed him as an internationally acclaimed artist. Russ failed art at school and has never drawn anything resembling art in his life. He's a writer, for the BBC, and a poet.

Anyway, he began sketching, for £2, and did a ton of sketches. I think at the next con he'll be in the small press section, look out for him! His banner shows some books he's written, a drawing of him as a Jedi, that I did, and some gears in a circle.

Russ won't be sketching at N.I.C.E. unfortunately for his fans. The organisers know about art.

We ate at Wetherspoons on Saturday, it's the same everywhere, the prices don't shock, and I can order what I do in Cleveleys back home. We then went for a walk along the Thames to talk about a project we're working on together. We planned to make it to Tower Bridge but failed. Russ' shoes fell apart.

I drew a lot of sketches on blank comic covers this weekend. The DC ones are fine, they're matt, have a slight grain, and accept all the normal forms of drawing implements and tools, pencil, ink, Copic Markers etc. Marvel however, for the most part, print theirs on a shiny stock that likes to repel anything you try and use. They especially hate erasers, ink and markers. It's a challenge!

I got to look round for half an hour on Sunday, 20 minutes of that time was spent getting between floors...Russ kindly watched my table. It was nice to stretch my legs. It made me realsie that I do need a helper at cons. I can't draw and talk at the same time!

I also was made aware that a lot of people didn't know if I was accepting pre-con commissions for the show. They don't look online so much for things like that, but on Twitter...so I may add a Twitter feed down the side of my blog. I don't particularly want to, but it may be a good idea!

We actually got home before 2am. It was 20 past one but still, we've knocked almost an hour off the first London con 2 years ago! We did miss a tube on the way back from the con, the stairs defeated Russ. I think it was the S.T.A.R. Labs mug that tipped him over the edge. And the 40 miles of roadworks on the motorway didn't help either. Still, we got to chat for six hours about the previously alluded to project. More on that soon!

Altogether it was a pretty good weekend. In my opinion, not as good as last year, but the main issues were with the venue. The fans and the other guests were great!

Next up is N.I.C.E! More on that towards the end of the week!