NICE! Back from another great weekend put together by Jeff and Bub Chahal and the staff and volunteers from Close Encounters. This year was especially relaxed and friendly with more than the usual amount of very reasonably priced artwork and sketches on offer. There were a lot of very happy people around over the weekend!

It's a comic con that has an emphasis on comic creators. If you've not been before then check it out next year. There are even 2 decent hotels within a couple of minutes walk from the venue. It reminds me of the old Bristol comic cons in it's approach and ambience, the helpful staff who are happy to assist and the easy interaction between fans and guests.

As regular readers of this blog will be aware, I usually attend comic conventions with my friend and sometime collaborator Russ Payne. Not this time. NICE is an actual comic con and knows the difference between a comic artist and someone who clearly isn't. Besides, he was on holiday with his family in a cottage with no power somewhere near Bradford. He was missed however as I was subjected to more ridicule in his abscence. He may return next year if he promises not to draw anything.

I was planning to travel by train as I had no banner to take (it died in Swindon and I've not had time to design a new one yet) and would be travelling light. And I can't drive (although I have had a lesson in the past year)Mentioning this to my friend Scott (the one who drove Russ and myself to LSCC a few years ago, kidnapped us afterwards, got us back at 0230) he decided that, if I paid for the petrol, he'd drop me in Bedford on his way to Swindon where he was going for a weekend talking about fish and all the guff that goes along with keeping them. This was the obvious choice as I don't think I've ever managed to find a seat on a train to Bedford before.

The plan was to set off at about midday to arrive around 5ish. Of course the M6 was it's usual roadwork filled failure. There were miles upon miles of roadworks yet I saw only four workmen that were actually moving around. Two were in diggers and there was one flapping his arms around holding a piece of paper. The other one showing signs of life was drinking tea in a digger. To be fair there were two additional figures sat in diggers but they were either asleep or were mannequins dressed like workmen...

The journey was uneventful outside of a substandard Starbucks experience for Scott. His triple expresso looked like something that fell out of a 1980's vending machine. It was the same Starbucks where, when Russ asked if he could please have a skinny latte, was told 'no' in June. I'll make a note of the name next time.

Scott and I arrived at the hotel at around six. I left my art folders and a box of sketchcovers with some friends in the foyer and headed up to my room to drop my bags off. When I returned to the foyer ten minutes later people were passing round the art from the opened folders and were trying to give me money. It wasn't a problem. Scott had to get off as he was desperate to get to Swindon for his weekend of aquatic talk. 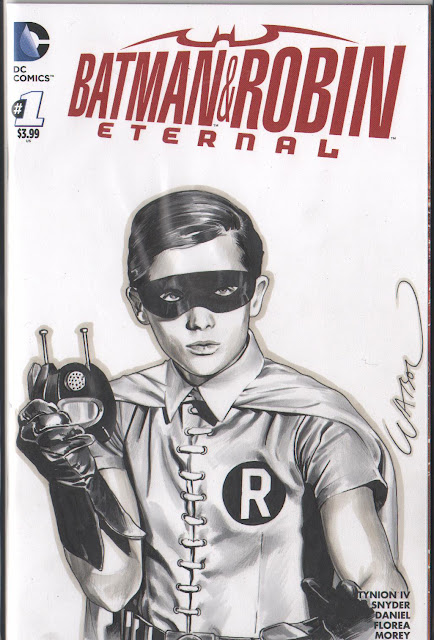 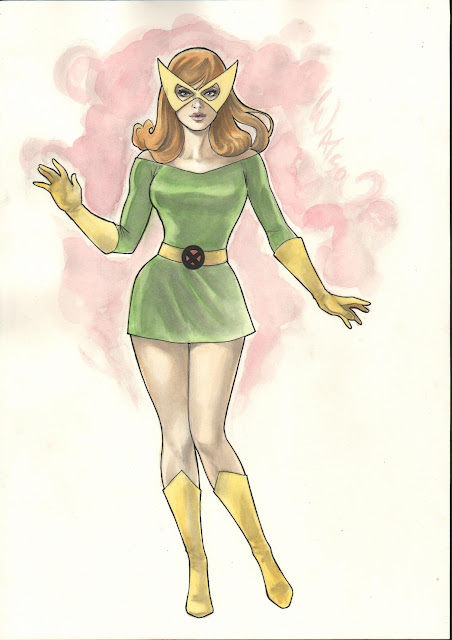 I headed to a nearby Indian restaurant with friends. Had a nice little chat with Mark Farmer about Angus McBride, one of my favourite illustrators on the way to the King's Head where I caught up with Doug and Sue Braithwaite. As I touched upon previously, NICE is very similar to the old Bristol con in this way where artists, writers and fans mingle together in and around the hotel well into the night. Jeff suddenly appeared laughing  his head off, sat on a barrel like a giant leprechaun. I think he'd had a bit to drink at this point. My 3D Star Wars t-shirt was what set him off.
I intended an early night but someone (I think it was me) started a conversation about The Force Awakens and I got to my room at 3am. I was really looking forward to a quiet nights sleep, no room sharing, no snoring. At 330am someone in an adjacent room decided to have a shower and then use a hairdryer. Why?

Looking at the table plan beforehand I'd presumed I'd be on the balcony and that's where I'd told everyone I'd be here and on other social media. I was in error, there was no-one on the balcony. Still, at least it was the right convention, if not the right building.
I was determined not to take on too many sketches this year as I wanted to fulfill all requests after my  enforced disappearance at LSCC earlier in the year. Didn't quite work out. It's the same problem as always, I can't talk and draw and I like to look at the person I'm talking to...which stops me drawing. 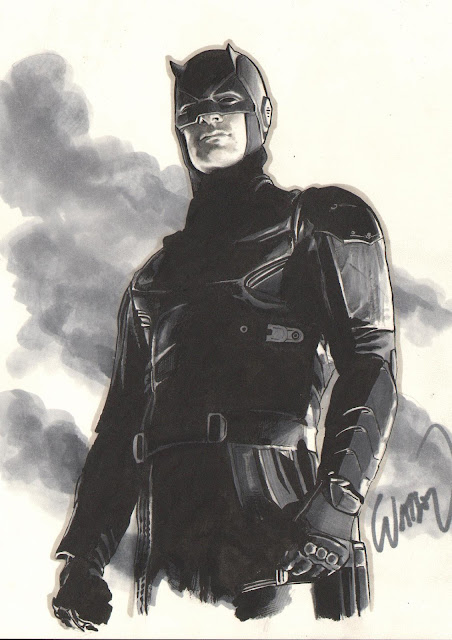 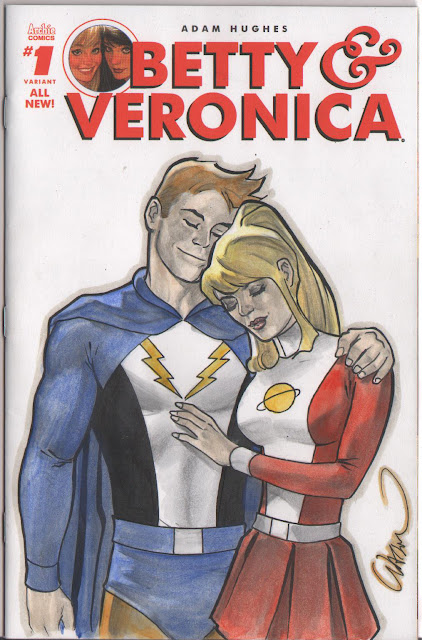 Lightning Lad and Saturn Girl piece I sold at the con

I did a Fred Flintstone one that was a lot of fun, I think that was my favourite one of the weekend. I quite like the new DC logo too. People were also dropping off comics for me to take home and do my more finished commissions on so I was constantly making notes about that. With regards to commissions, if anyone did set something up with me then please get in touch to make sure I know what I'm doing!
People also popped by to share artwork they'd bought at the con. Cam Smith (great guy and artist, good to meet him) was selling some nice pieces at very reasonable prices as was Mr Farmer and Adi Granov. Everyone I spoke to had managed to pick up at least one piece they considered a bargain.
One guy was after getting as many artists as possible to draw Prince in a sketchbook. He was a little despondant in the morning as he'd only got one artist lined up in the first hour but by the end of the weekend the sketchbook was looking great, there must have been fifteen pages filled, including a really nice Bisley piece. I'll be adding to it at Thoughtbubble (the book, not Simon's art). 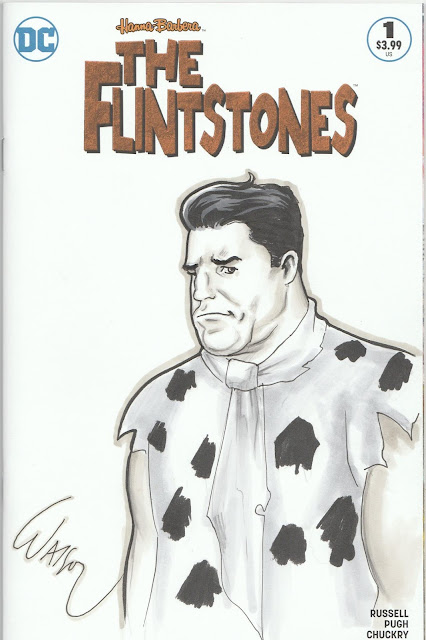 Flintstones sketch I did on the Saturday 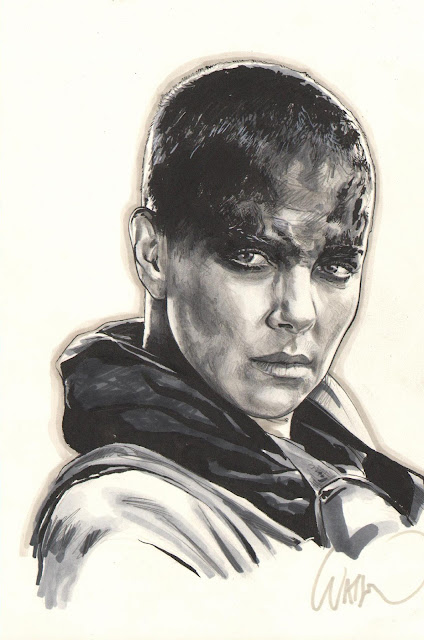 I drew at least three Harley Quinn's over the weekend, each one a different version. I also sold two pre done ones on the day that were different again. How many versions of her are there?
I had an ever changing cast of helpers sit with me at the con. Admittedly a fair few just wanted a rest but it was nice to have a bit of company.
I won't say I missed Russ being there shaking the table whilst he 'drew', but I did miss defacing and confiscating his equipment. Thankfully the guys stepped up and there was a lot of vicious banter flying around mostly at my expense.
By way of comeback I asked each of them for a quick sketch. I think it's something I'll continue at each convention. Mick Skinner set the bar high with his Batman... 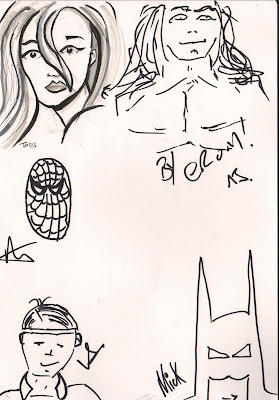 
I was asked by a fair few people about the book I'm writing with Russ, when it'd be published, how it was going. There wasn't any point in lying. Russ is still recycling the same inane paragraphs he wrote 18 months ago. He's convinced I'll think they're new if he changes the order of them. He's been unable to write recently after a series of ridiculous events. His kitchen basically jumped the shark in January and took until the beginning of August to be sorted. Also, he was on a game show in July that should be aired very soon, it's called Rebound. I'll post details of when it's on as soon as I find out. It'll be interesting to see if he plays himself or one of his alter-egos on the show. The gameshow only took a day out of his life but his ego reached new heights afterwards and so for the past month he's been a genius in his own mind. You can imagine how easy it is to reason with him.

Jeff Chahal sorted a meal on the Saturday night for all the guests and the volunteers which was great. It was at the same Indian restaurant I ate in the night previously.
Great comics based chat in the bar of the hotel afterwards. Favourite members of the New Teen Titans and just how good Gil Kane was were some of the highlights. I got an early night, 1am, only to be woken at 2 by someone having a shower. This was repeated at 4, along with another use of a hairdryer. Madness. Perhaps the hundreds of javelin throwers also staying in the hotel kept accidentally stabbing themselves and had to clean blood off their bedsheets...

Sunday was much of the same. Some fantastic news, at least for me, was that I sold my Biff Tannen sketch. I'd had it for a few cons but knew, given time, someone would come along who appreciated it...it was one of the best likenesses I've ever done and I'm glad it's now in someone's collection. I also managed to offload my colour Atom smasher piece (for a hefty discount)...a commission piece that the person never turned up to collect (one of only two times that's ever happened). It's finally gone, thanks Mick!
Scott arrived a little late (traffic) to pick me up but that gave me chance to be introduced to Chris Geary who's done some really nice war books with art that evokes the old EC titles and Alex Toth in particular.
I found there was a lot less room in the car on the return journey as Scott had brought along crabs, a ton of starfish and some tube worm thing along with a load of equipment that he possibly talked about at length (I shut down mentally after a while, it's not my mid-life crisis). 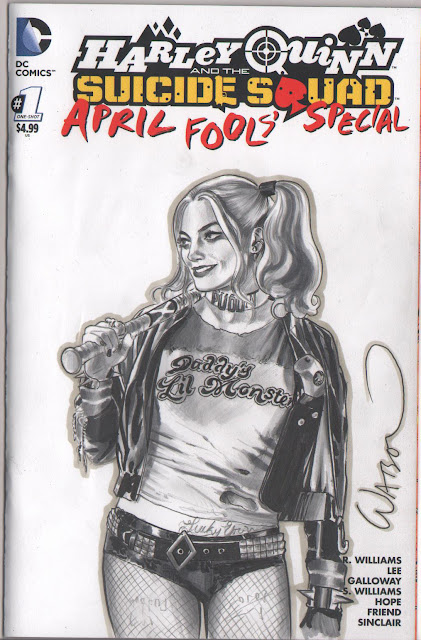 Harley Quinn, drawn beforehand that I sold at the con 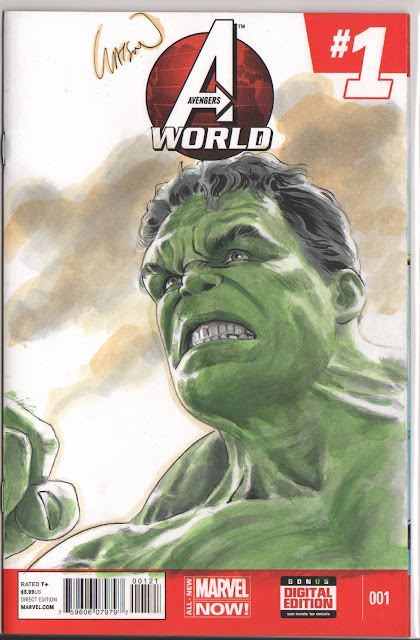 The journey home involved a reasonable sized detour to Crewe for Scott to pick up some lights for a fish tank he'd won on Ebay. Fine. But next time I've been waiting to wee for two hours and you refuse to stop because you need to be somewhere for 10pm don't lock the doors and windows when I try to get out at the traffic lights...but thanks for the lift.

If you've not been to NICE before then give it a go next year, it's the friendliest con I've been to and one of only a handful of comic conventions in the UK that concentrates on comics and comic creators as opposed to celebrities and knock off prints by some bloke who has nothing to do with comics. It's centrally located wth easy access to food and drink and the train station. No, Bedford isn't the easiest place to get to, especially from the north, but it's worth it. Thanks again to Jeff, Bub and all the volunteers and helpers!

Next con appearance, Nor-Con 6 next month. Details to follow soon!