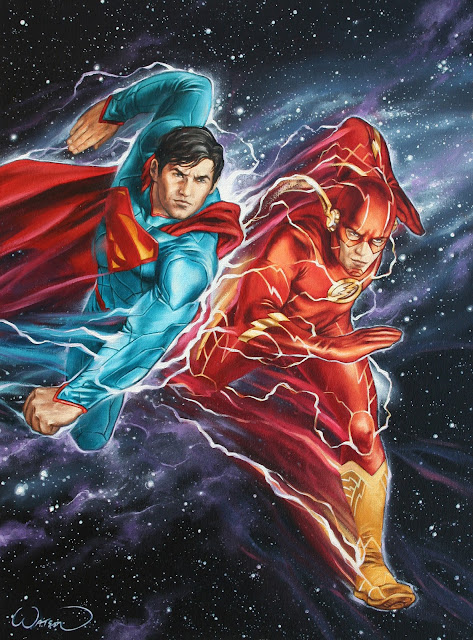 This is a commission I was asked to do a while ago. I was out of my comfort zone having never painted The Flash (and Superman only once) and having the scene set in outer space. Initially the hardest thing to do was get the uniforms right as every artist seems to draw the uniforms a different way. I eventually asked for reference of how the client would like it to look.

I thought it may have looked cool to use a Star Trek warp speed effect to show the speed but t doesn't quite work when using red as the main colour...so I painted that out and left it for a while. Usually, as you can see from the earlier Spidey post, I don't do much in the way of layering but I found that the best way to create movement on this piece was to loosen up and use broader strokes. Also, purple came in handy as a bridging colour between the reds and blues.

I was still struggling to get the piece to work as a whole, the Flash was moving and Superman wasn't...the answer to the problem was found by leafing through a Drew Struzan book...lightning (Back to the Future posters, genius...if you haven't seen them, check them out) 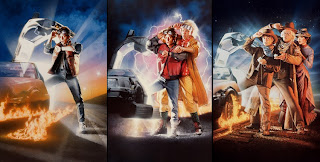 There was already lightning on the Flash as it's part of his new uniform and adding it to Superman solved the problem. I think it looks pretty nifty now. It brought the whole piece together.

Too often when I draw, especially for published pieces, I tend to stick as closely as possible to the current version of the uniform/look of the character, even if it's a pain or I struggle with making it work in paint. Really I should just do what works. Like adding the lightning to Superman...it shouldn't be there...but it's right!

Another thing I often/pretty much always do, is paint without thinking or visualising what the finished piece will look like. An advantage is that it helps keep my interest in the art...but I do run into problems. Right now I'm painting a JSA/Crime Syndicate piece and I've painted in a really blue L.A. sky...will that work with the ref shots and the lighting I've used for the characters? Possibly. Maybe I should have thought about it. It's also why, if you ever get a piece from me, the art is never centered on the canvas board/piece of paper...
Posted by John Watson at 03:48