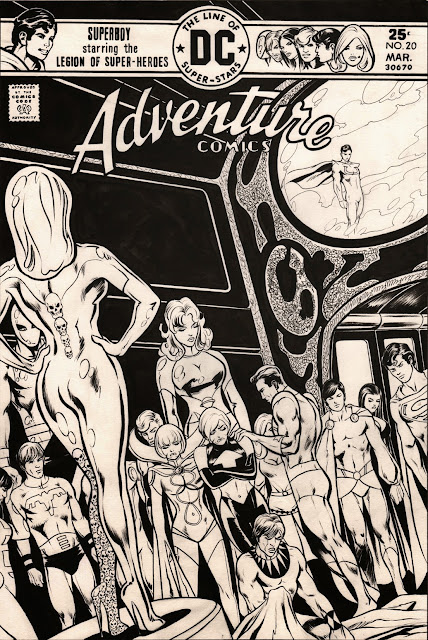 ADVENTURE COMICS #19: THE ONGOING ADVENTURES OF THE LEGION OF SUPER-HEROES 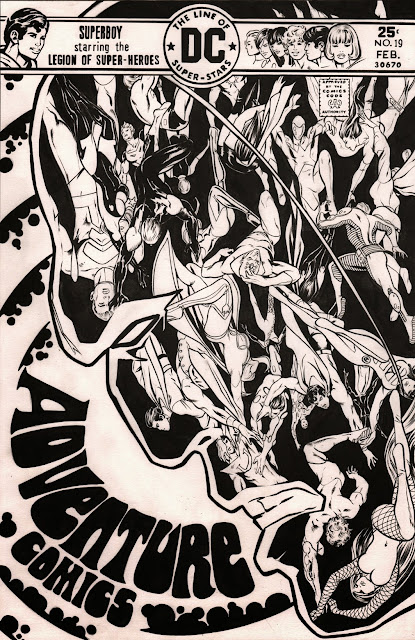 I think I succeeded in making this piece look like an original early 70's DC cover. You can't get any bigger than Darkseid as a villain so it's a good way to end this commission series (although there is the last issue to follow which ties up the loose ends!)

I've neglected the blog recently, I had an advertising job come on that threw all my work off! Back to normal soon.

I meant to post these covers a couple of years ago but I evidently got sidetracked! So I'll talk about the last 4 covers in the series together.

First off, Son of M was the series I most enjoyed working on at Marvel, it was a great team. There was a lot of interaction between myself, David Hine the writer and Tom Brevoort the editor. It was a similar set up to the Hawkman team of Geoff Johns and Pete Tomasi from my DC days.

David and I chatted about each issue to make sure the cover had the right feel and then, after I'd done prelim sketches, Tom would edit them but without being dogmatic about having his own ideas realised. It was intelligent editing, both helpful and useful, something that's quite scarce really.

Anyway, here are the covers! 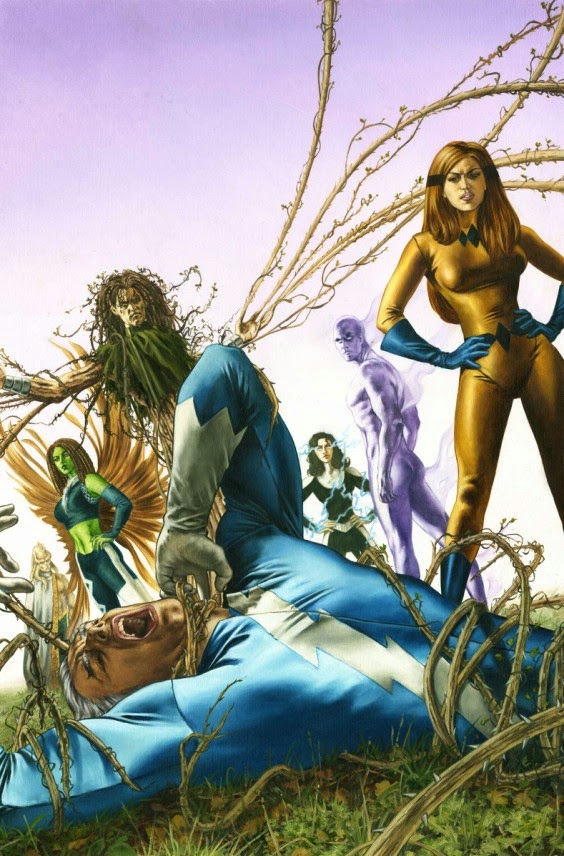 I thought Quicksilver turned out pretty well on this cover. I wasn't familiar with the new characters, well, the characters from the Jae Lee Inhumans series so there was a lot of initial research. This was the cover that got me a contract with Marvel.

As an aside, one thing that irks me a little is that now, according to various companies or people, I apparently never worked on this series. The hardback 'Marvel Classic' version that came out recently doesn't mention me at all (thanks to David Hine for pointing it out to me), I signed a load of them at a con last year. Allposters lists the cover above as being drawn by Roy Allan Martinez ( who drew the interiors but not the covers)...the oddest is the cover to She-Hulk #20 that I painted when Greg Horn, the regular artist, was having a break one month. According to the Grand Comics Database, Emily Watson painted it. So much for accuracy! Bit irritating really.

Anyway, there are a few things I would've done differently with this cover looking back, I would have used more purple in the background, like on the classic '60's Marvel covers when they used deep browns and purples...but it's not a bad cover! 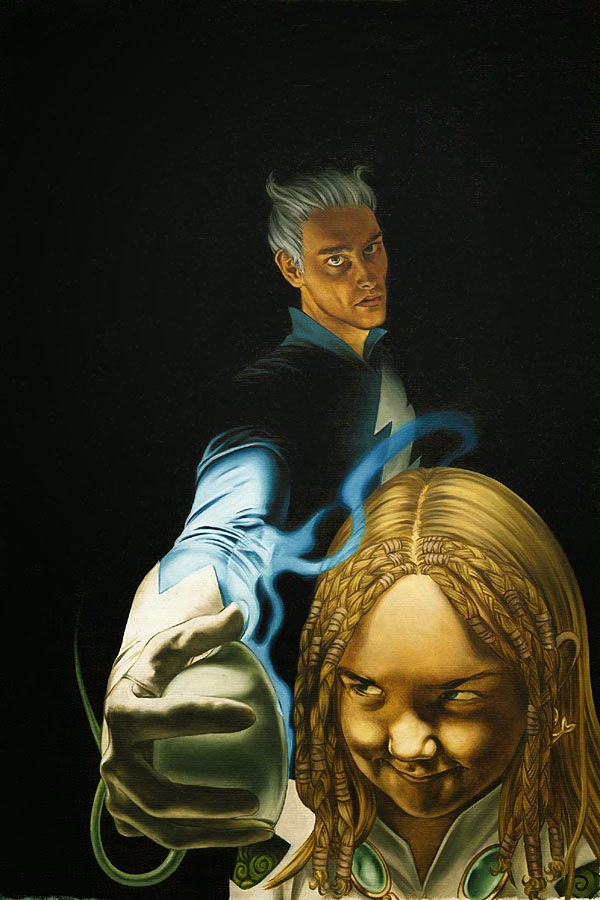 This one was a pretty disturbing image, Pietro giving his daughter the mists of Terrigan. I used my friend Dean's daughter for the ref shots. I used her again on a Silent War cover a couple of years later, she'd grow a lot in that time! It's quite a stark image. I initially had Pietro looking more heroic but Tom wanted him to look drugged up as he'd been using the mists quite a bit. I should have gone for a more Neal Adams like foreshortening on the figure maybe, changed the angle a little.


This one took me a few sketches to figure out what the editor wanted. I was going to have a full figure sat on a stone bench brooding with a stained glass window behind him, as if he was in a churchyard. Pietro would be holding Magneto's helmet, contemplating it. This is much more direct. I spray painted an old American football helmet red for the ref shots for this piece and took a fair few photos of the model I was using for the series.I used a teenager, or maybe he was 20, I can't remember, because as soon as you add the white hair it adds 20 years onto the age. I needed him to be in his late 20's. 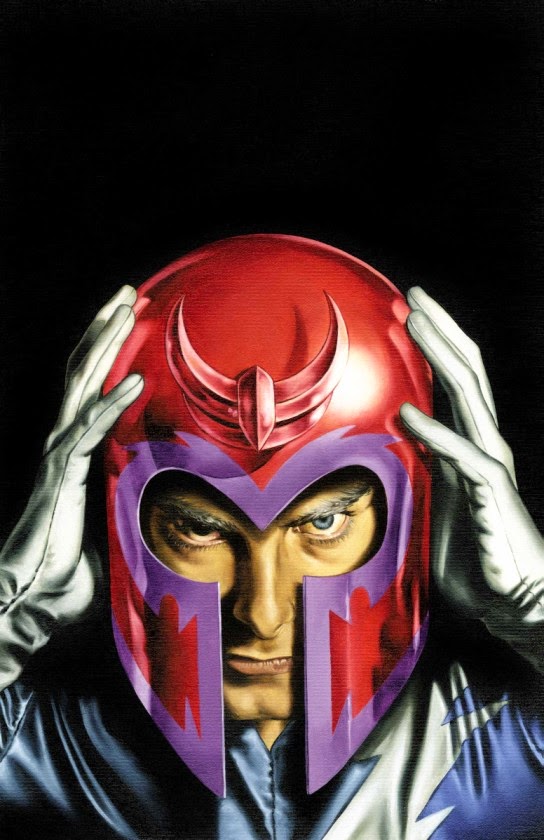 This scene never happened in the comic. The original thought was that New York had been evacuated because Black Bolt was going to let rip with his vocal powers. The idea was that just a 'shhhh' from his lips could cause massive devastation. Nowadays it seems Black Bolt shouts on every cover he appears on...it kind of takes away from the point of the character and lessens his powers somewhat. This scene did take place eventually, over a year later in Silent War. I used this same background on a Daredevil poster for Dynamite...it was one from a series of pics I took when I was in New York a couple of years previously. I did it purposely as I thought it'd be cool to show 2 different events in the Marvel Universe taking place in the same location. I need a better picture of this cover, so apologies for the rubbish one below! 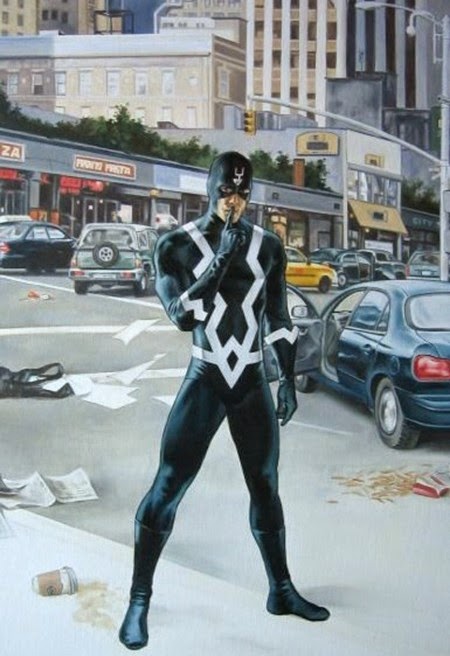 In hindsight I think this series of covers worked out pretty well. It was my best experience at Marvel. It's a shame the series has been retconned now. I'll talk more about that in my Silent War post...