The Generation: Origins; an update. 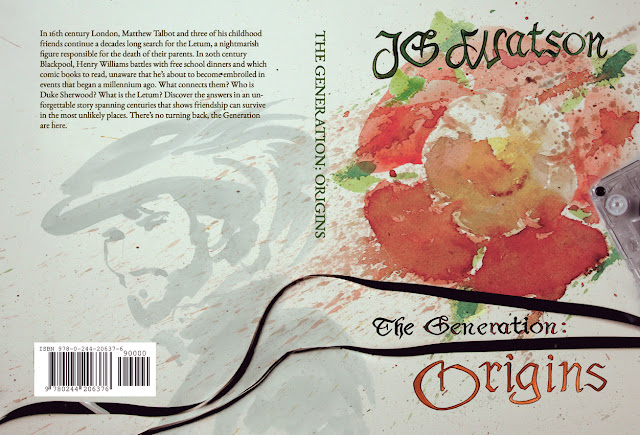 It's been almost six years since I began writing the first in series of books. It began as a collaboration with my friend, Russell Payne, ground to a halt, and then re-emerged as a solo project. Russ is now also writing his own book based on what he'd begun (and never finished) for our joint effort. His book will be about the perception of reality, something I'm certain will be unique.

I finished writing book one some time ago, in late 2018. Or so I believed. Outside of a vaguely pretentious dissertation I wrote for my degree, I'd not written anything of length or scope since my GCSE English years. And, looking at what my teenage kids know about the English language, I didn't learn that much about the English language at school. The result? Editing the book myself was always going to be difficult with my lack of edification regarding the rules. So, I'm having the book professionally edited.

After an initial read through by the ed, it turned out that I hadn't really finished writing the book. I've recently added four new chapters that tie together several loose ends, seemingly random events connected through time, and create an entire new world for the protagonists to attempt to make sense of.

So far, the process is going well. The editor makes notes and I have the option of ignoring him, or applying his notes and advice. So far, I've been happy to go along with all the changes and I'm learning about the things that bypassed me at school (although I'm pretty certain I was never taught them in the first place. However, since I spent most of my schooldays daydreaming, who knows?)

For those folk asking when the book will be published, my answer is, 'when the editing process is finished.' I'm currently awaiting feedback on the new chapters. The cover art is done, although I'll need to alter the thickness of the spine in light of the additional chapters.

In the meantime, I'm writing book two. For the fourth time. Altering the end of book one threw the new book into disarray, so I decided to scrap the entire thing and begin again. I actually enjoy the writing process, so it's not really an issue. It's a very different story from what I intended and the characters, after a little resistance, are beginning to settle down after all the plot-line upheaval.

Book 2 is set in the 1980s. It's a different 1980s from the one anyone my age will recall, as a result of what happens toward the end of book one, but it's still recognisable. Researching the decade, and delving into my own experiences has been a blast, although having Sinitta's So Macho stuck in my head for the past week has been problematic. Could be worse, could be the theme tune to Postman Pat. I've also ended up becoming a little obsessed with old school BMX. They're ace. Uncovering songs that I probably only heard once when they were released, the titles and artists lost to time, but the tunes eternal, has led to an expanded playlist to accompany my late night writing sessions.

I'll be self-publishing through Lulu in paperback. Eventually it'll be out as an Ebook, but not for a while.