When collectors don't pay for commissions.


There are a few groups on Facebook and other social media sites that name and shame artists who don't produce the goods. People commission art, pay for it, either in cash at a convention or through Pay pal online, and then the artist doesn't do the work, or they do it and never send it. Sometimes they promise it for a while in correspondence but then they disappear, never answering messages again. They keep the money and shaft the fan. Sometimes the money involved is a lot, say $800, $1000. Yes, it's out of order and is basically theft. So collectors call them out and rightly so. 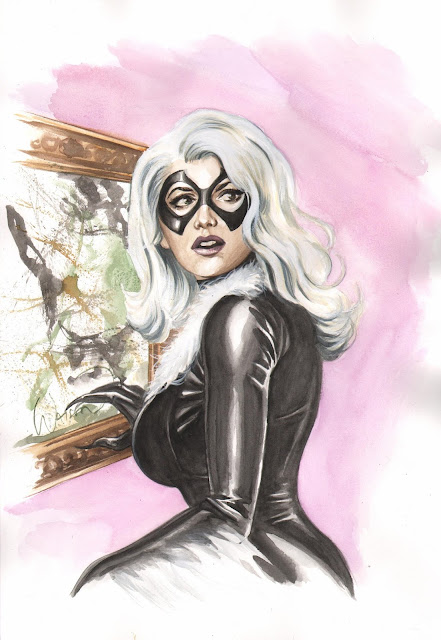 Black Cat A3 watercolour. For sale at NICE in September

But, let's take a moment to look at it from the other side, when someone commissions art from an artist and then never pays, doesn't answer messages and ignores the artist. It's not theft, but the artist has worked hours or days on the art and then gets shafted. They're out of pocket. As freelancers, as self-employed people, that's a problem.

Well, you may say, why not take payment up front? A few reasons. One: It takes away the impetus to do the work. Two: Deadlines crop up, and commissions with no deadlines take a back seat, which means the wait for the art is longer than intended. That irks the commissioner and creates unneeded stress for both parties. Three: I like to complete the transaction when everyone's happy with the finished product, me with the work and, well, the person who commissioned the work with the work too! Fourth: I line up work for a few months in advance, I have a family, so I don't live week to week. If the commissioner hasn't paid any money, it makes it easier waiting for the art to be done, which sometimes takes me a lot longer to get to than I intended. I think those reasons are valid.

It used to be rare thing, someone ordering a pre-con commission to be picked up and paid for, at a con and then not turn up or answer messages ever again. But, it was only the odd person, one in fifty or so. Often I could sell the piece to someone else if that was the case.

The past year or so, it's started to become more frequent. It happens in a few ways. Here's an exchange...
Commissioner messages, bloke who's bought stuff off me previously although he did take a long while to pay...
'Hey, have you managed to start my piece yet?'
'Sorry for the wait, I should be able to get the piece done over the next week or so.'
'Ok, great.'
I draw the piece, in the case I'm re-enacting here, it was on a Superman blank. The next week I send a jpeg.
'I love it, but I didn't think you'd do it so soon, can I pay you at the end of the month?'
'Sure.'
Irritating as he knew I was going to do the piece over the next week. And then the guy disappears and never answers another message. Is it a case that he didn't see the message? Well, no. He just decided to not pay for it. Be honest and at least get in touch...Thankfully, I sold that one several months later.


One guy (another, have you done my piece yet bloke) was going to pay me at the end of January this year. It passed, so I messaged a reminder in early March, followed up with another message asking if he still wanted the art at the end of March. Early May, messaged again. Nothing. Three times, there's intent. I figure its over. That particular sketchcover I'm going to sell at NICE for half price, out of spite. Petty? Perhaps. At least it's a popular character. At least half the people who disappear have commissioned something a little esoteric (or weird) that I basically have no chance of selling. 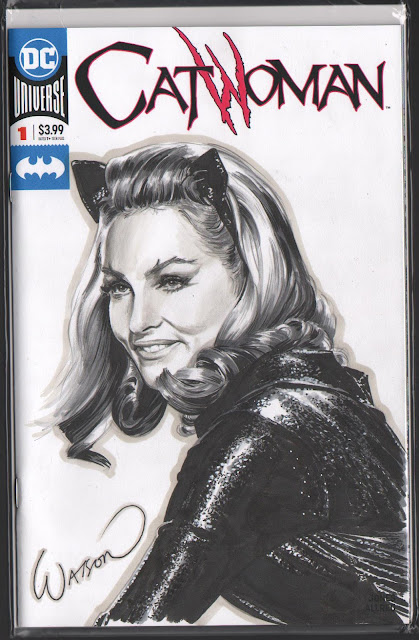 This year being shafted is happening with about 20% of commissions, which is alarming. I get it, situations change, people have something happen in their life where suddenly they can't find the money and they send a message. That's fine. Communication! I don't mind waiting for payment, if I know what's happening. And, those people who let me know before I start the piece that they can no longer go ahead with the commission, thank you! But, the majority of people just never reply. They read the message then go dark.
Are they dead? No, they still post pics and comments on Facebook. And, it's not just first time commissioners who are doing this, it's people I've met, people who I've done work for before. If there's an issue, send a message, 'sorry, been a nightmare, situation's changed, can no longer afford commission.' Ok. But ignoring the artist? No.

Is it a case of the collector not being happy with the piece? Well, no. sometimes people aren't happy with what I do and I either make changes, or we work something out. No, this is a case of people asking me to provide art for them and then reneging on the payment. It's not something that happens to only me, it's happening more often to other artists too. It's an issue. It takes time to draw and I rely on commissions for a decent part of my income. It's becoming an issue.

This is work I've done, taken time over so, I'm out of pocket when people don't pay. It's not like I spend 5 minutes doing these things. When I work my way through my list of commissions, I message people before I plan to start the work, give them a heads up. Sometimes people tell me not to go ahead, for different reasons. Fine, I've not put pencil or brush to paper, not a problem. Sometimes people never reply, again, no problem outside of having to change my schedule. But when I've done the work? Bang out of order.

Maybe there's a group on FB that names and shames non-paying fans and collectors?

I don't want to take money upfront and then have people moan because they've had to wait for 2 months (ok, it's likely going to be longer) before I can get to their piece. But, it's probably something I'm going to have to do if the number of shafters continues to grow.

Should I charge double to make up for being shafted? No, because that punishes the people who do pay and are honest.

If you're reading this and have disappeared on an artist, reneged on payment, then think about it, get in touch with the artist, tell them what the problem is. Do the right thing.

And to any artists who've taken money upfront and then never done or sent the art to the commissioner, don't be a thief, do what you've been paid to do, or at least contact the client and explain what's happening. 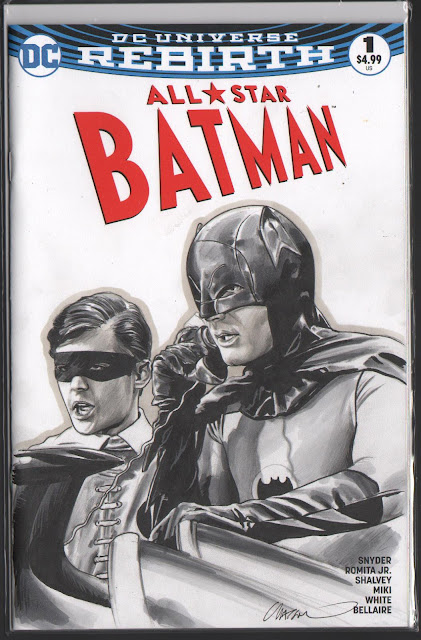 West and Ward, communicating. You know it's the right thing to do