ADVENTURE COMICS #8: SUPERMAN AND THE LEGION OF SUPERHEROES CHAPTER 3 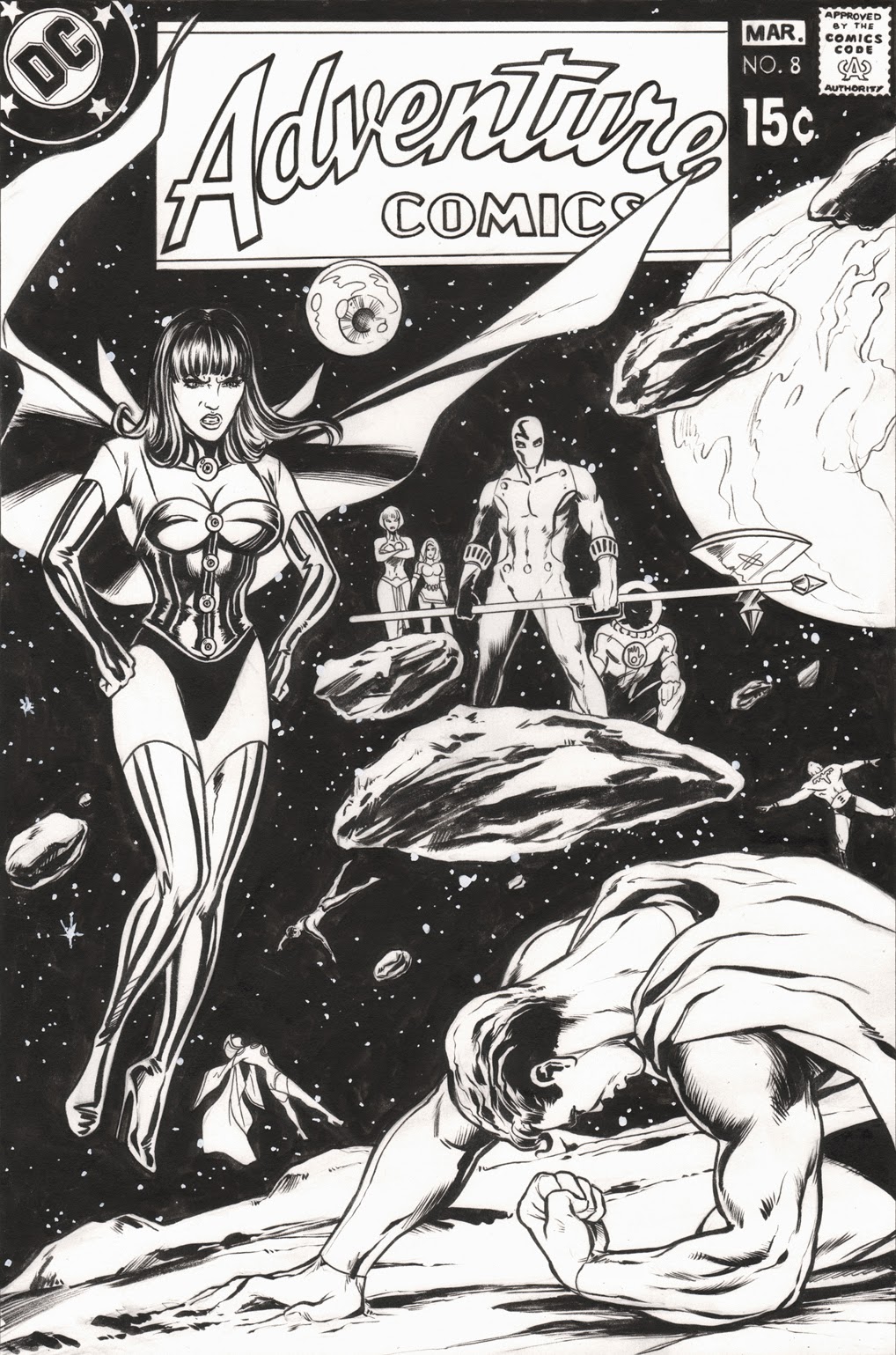 The New Fatal Five attack the Legion in the 31st Century. Lois Lane as the new Emerald Empress, The Persuader, Mano, Titania and Esper Lass make up the team...I should have put more Legionnaires in the background. Man, I forgot to add Superman's 'S' on the back of his cape...

For some reason this looks like more of a modern cover than the last ones...it may be the inking style.

ADVENTURE COMICS #7: SUPERMAN AND THE LEGION OF SUPERHEROES CHAPTER TWO 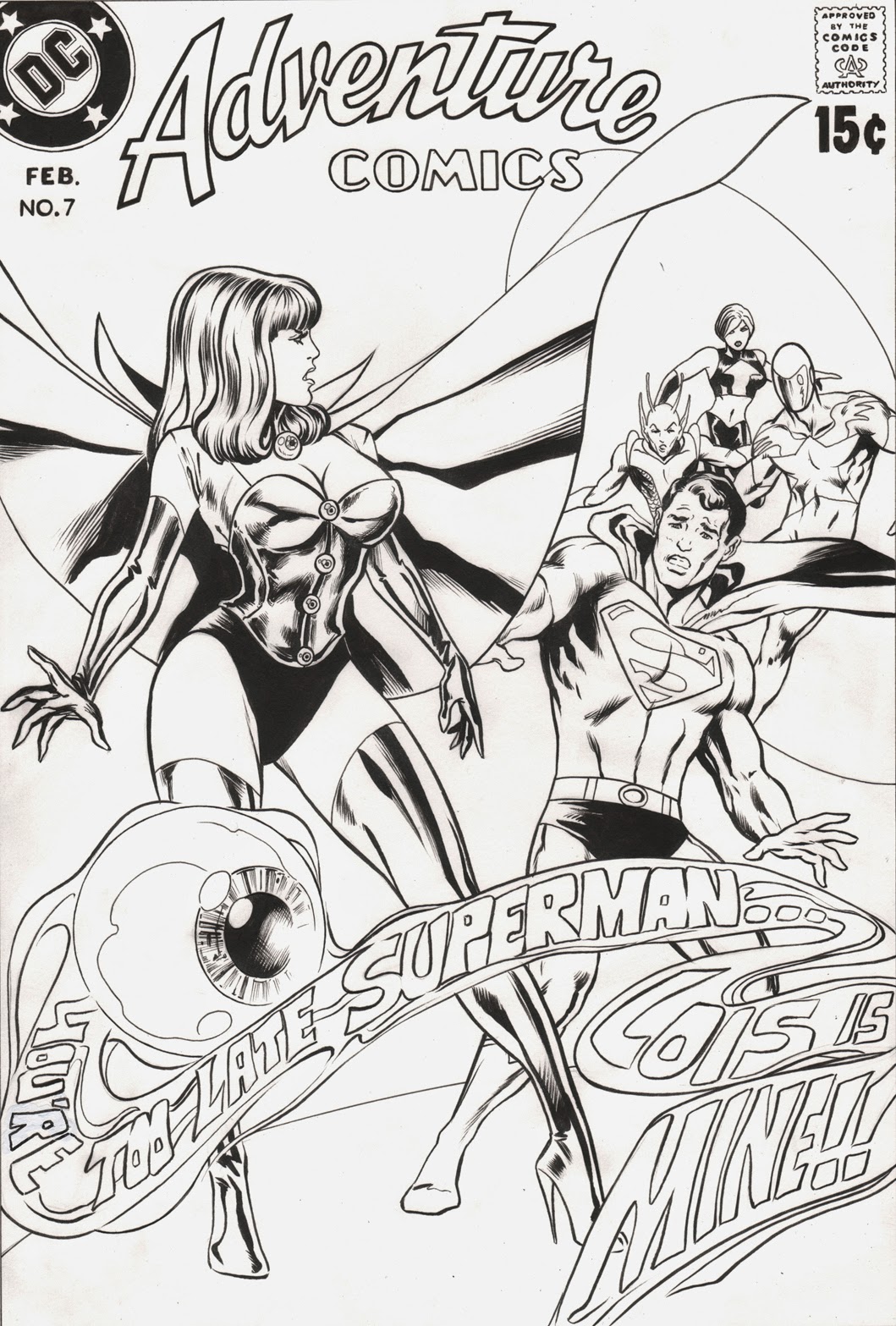 Superman is too late, Lois has been taken by the Emerald Eye and become the new Empress. The basic idea for this cover came from Justice League of America #60 and also, a recreation of that cover that Arthur Adams did. I can't find an image of that anywhere but I remember the anatomy of the main figure was a lot more dynamic than on the original cover. I've tried to capture that here.

I was quite happy with the way the text came out. Love those old DC covers where the text was incorporated into the art.

Regarding the uniforms of the adult Legion, I've used Barry Kitson's Light Lass design as it's awesome, easily the best version, although I like the hairstyle Mike Grell drew!

One thing I've noticed recently, and you can see it in a lot of the art, is how quickly artists like Cardy, Kirby, Kubert, Adams, Buscema, used to work. It's not rushed, it's technically great, but the facility and skill they had enabled them to work fast. This translated into a sense of movement and dynamicism. Some of the linework is almost scribbled, but the lines aren't superfluous, they add to the art. True craftsmen.

I think maybe it's a confidence thing with me. I can be pretty quick painting, but linework, always struggled with inking. I pencil pretty quick, it's loose, but I tighten up too much with the inking. In fact, it takes me longer to ink than pencil a lot of the time.


Been wanting to draw this piece for a while but not had the time until now. Perez is so detailed, and this may sound crazy, but until I tried drawing like him, I didn't realise just how detailed his work is... 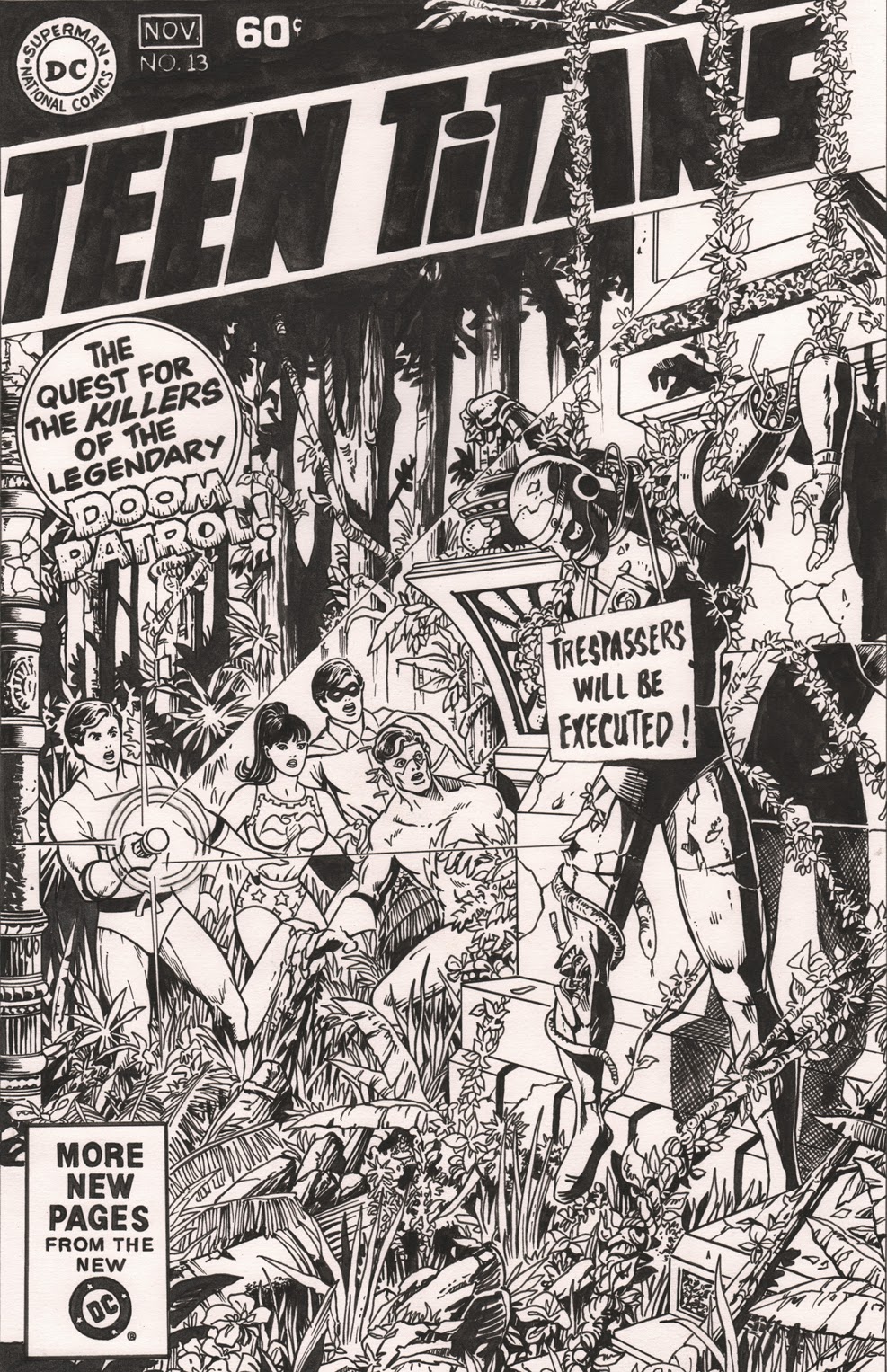 I don't think anyone else can draw the New Teen Titans like Perez. It just isn't the same...there's very few artists you could say that about really. Most titles or characters aren't defined by a single artist, in my opinion anyway. Changeling, Starfire, Cyborg, Raven...never as good drawn by anyone else.

I'd say Excalibur should always be drawn by Alan Davis. It just isn't the same otherwise. I loved the way he had a real range of sizes and body types for the different characters.

After looking through a stack of my favourite old comics for the last post about Nick Cardy, I was hit by an idea. This is the result... 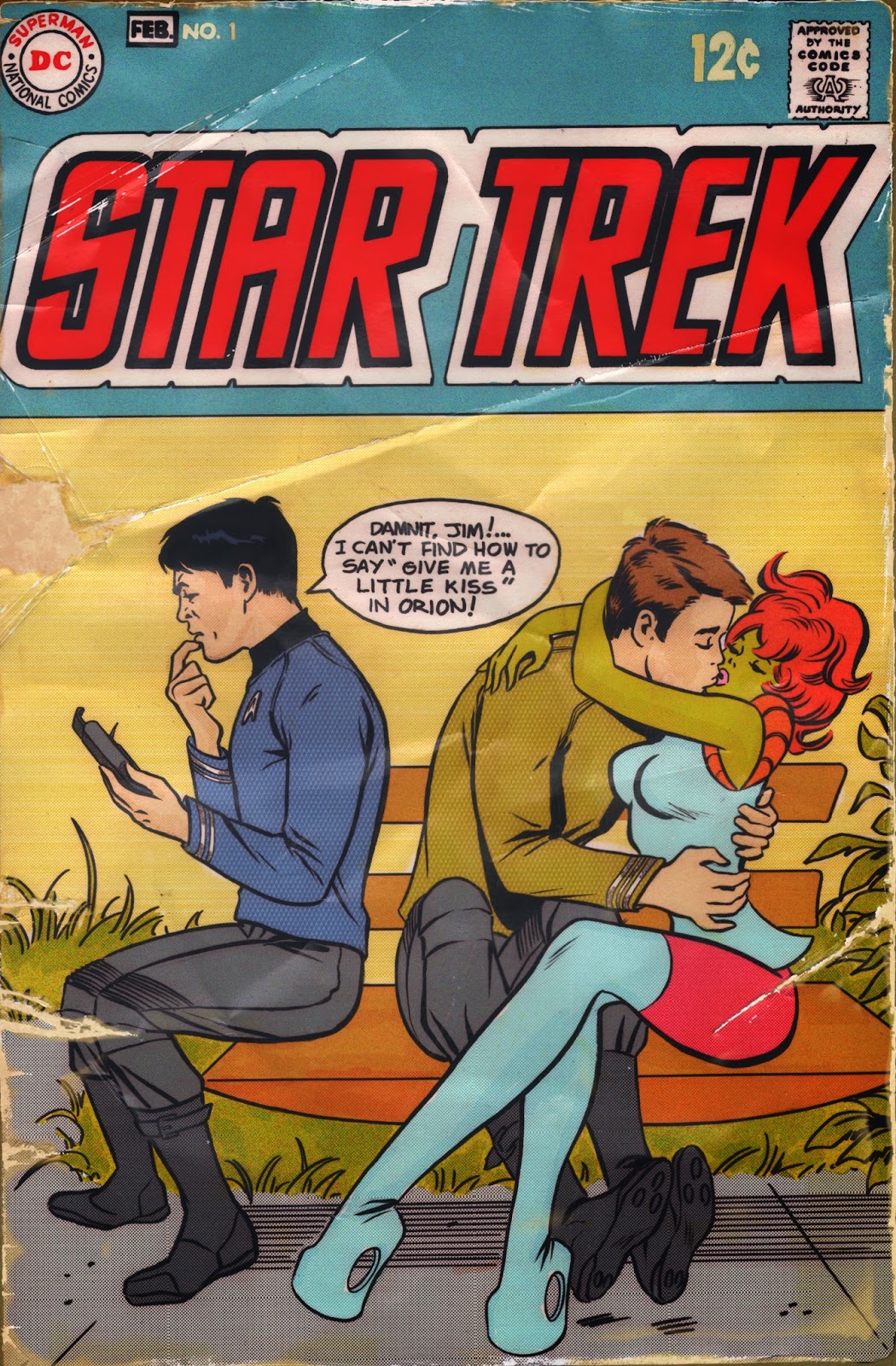 Here's the coloured version without all the scuffing... 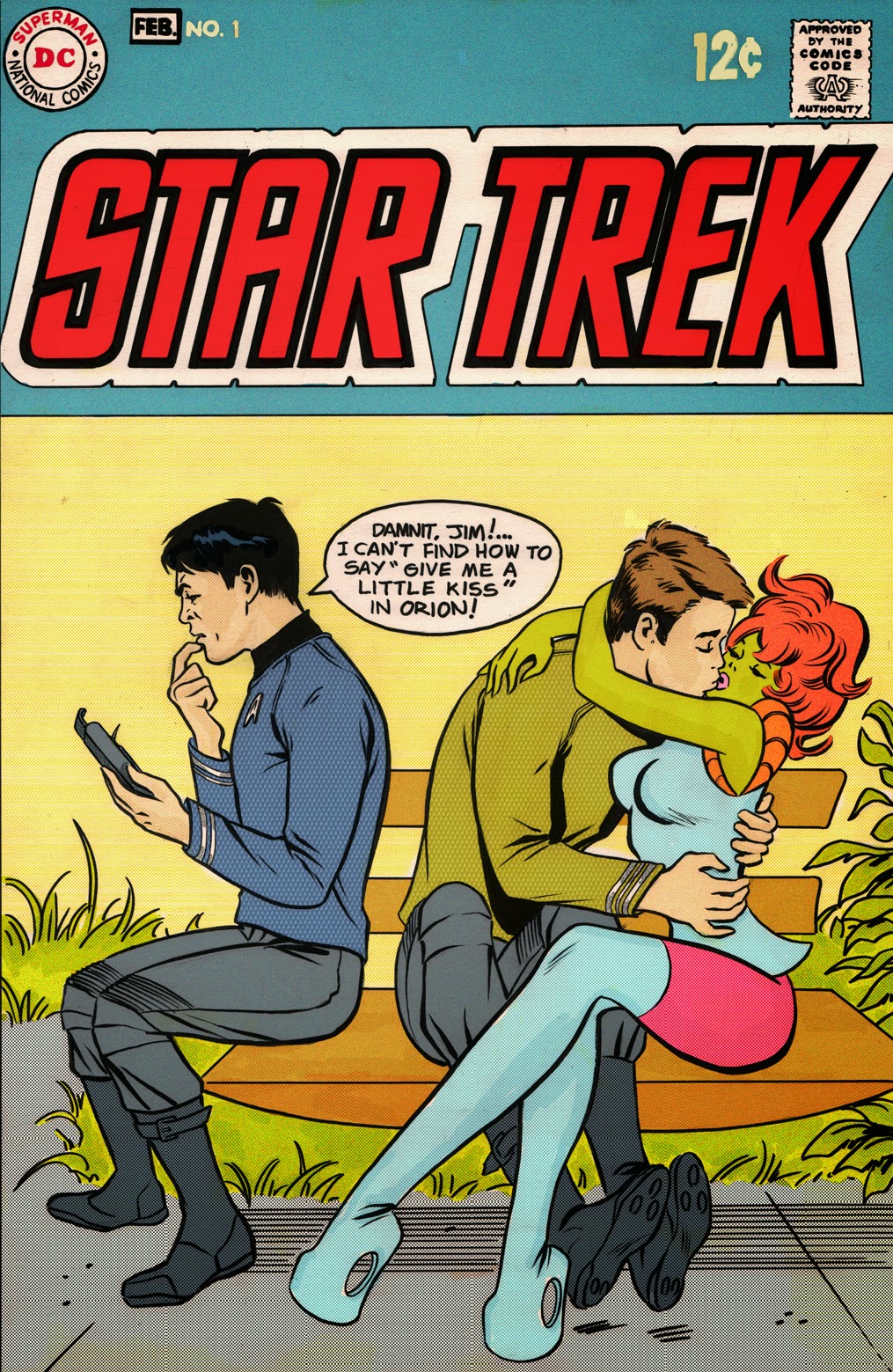 And here's a close up to show the uniform pattern that took me an age to figure out in Photoshop... 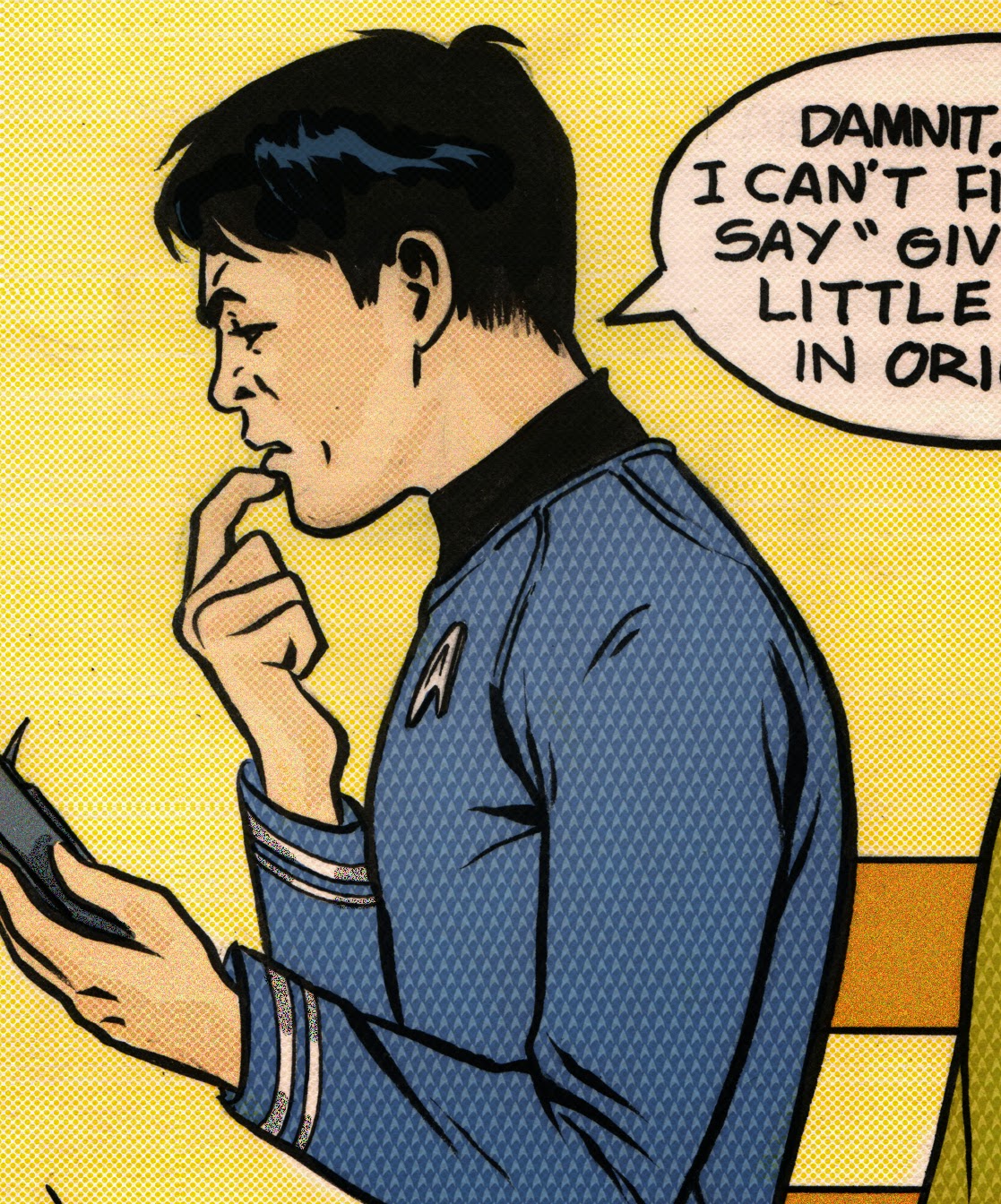 And finally, the original Bob Oksner cover from Binky's Buddies #1 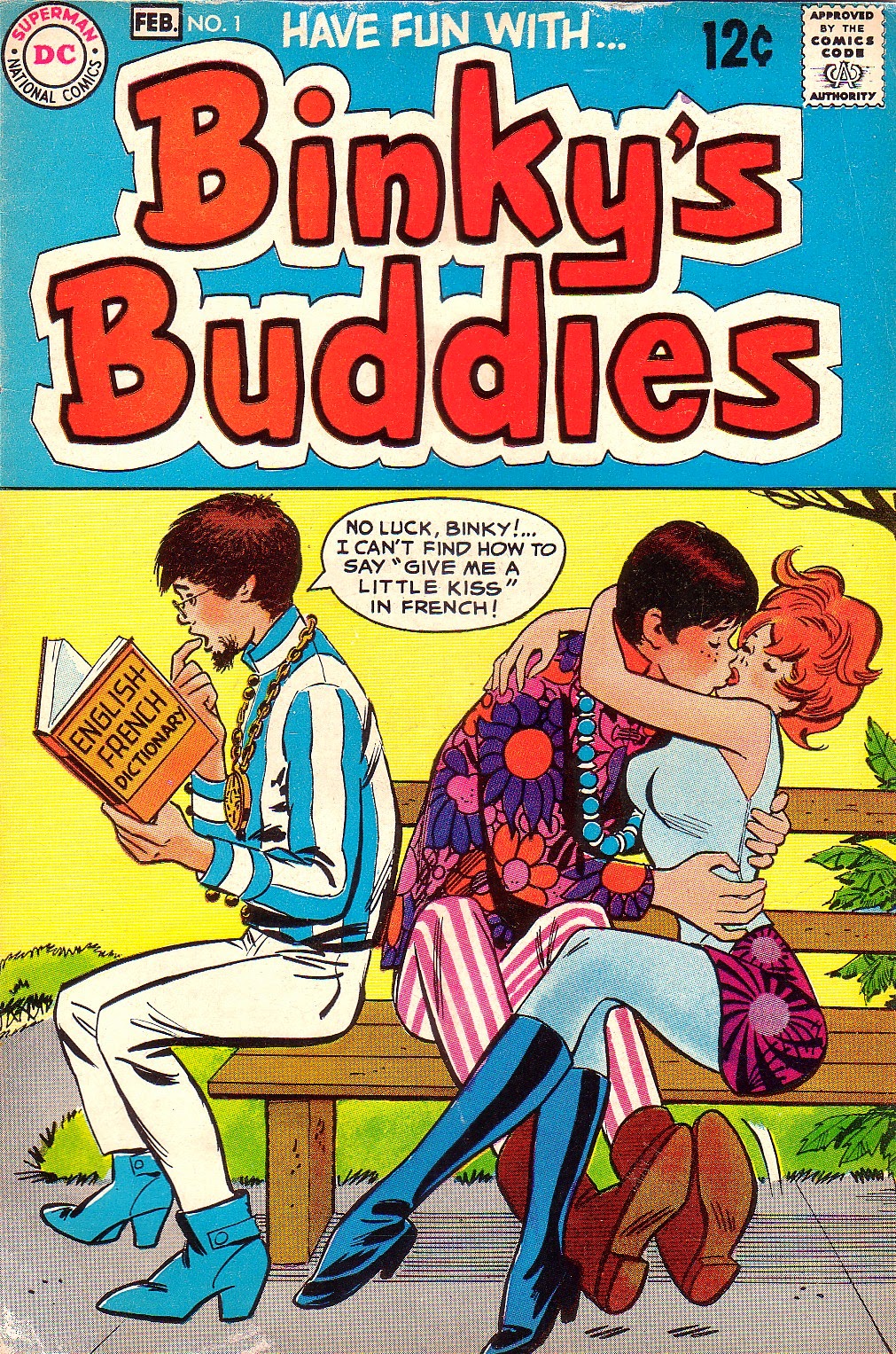 I've also drawn a version with Shatner and Nimoy...but I've not coloured that yet...


Aquaman #37 had a massive influence on me as an 8 or 9 year old. Just look at the cover, it's incredible.


The angst stress on Aquaman's face is palpable. The linework on Aquaman and Mera has such weight, Cardy has managed to draw a pose that shows both Aquaman's vulnerability and yet his immense strength too. The brushwork on Mera somehow conveys the weight of her unconscious body. Aqualad struggling against the pull of the quagmire, the almost alien landscape that the absence of water has created...it's probably my favourite cover of all time.

In fact, this issue I used to photocopy frequently at the local library (Bispham library, moved a few years ago, although the building is still there). Remember those sticky octopi that you threw at the wall and then they walked down it? I used to chuck them on the ceiling and  then race to the library and see if I could make it back before they fell. Never did. Obviously. They had worms too...but they were never as good.
Each photocopy cost 10p...a lot of cash in those days considering a comic cost 15p. But, I think I've mentioned previously somewhere, it was greyscale too, but I loved colouring those pages.

As an(other) aside, a friend of mine purchased a page of the original art for this issue from a market stall in Fleetwood, a couple of miles down the road from where I live(d). How did this page end up there? What an unlikely place to find a page of original Nick Cardy art.

I got my copy of this issue from Justin Ebbs through his mail order catalogue. I found out about that through buying a copy of an early 80's comics price guide, probably by Duncan McAlpine...

I'd seen a small b/w version of the cover in an advert in Teen Titans #13 (see below) and was blown away by it. But when it arrived (along with issues 28, 39 and 40) in the post it blew me away. I think it cost me about 90p, it used to be in reasonable condition too. It's a great run of covers by Cardy on Aquaman, one of the best of all time in comics. 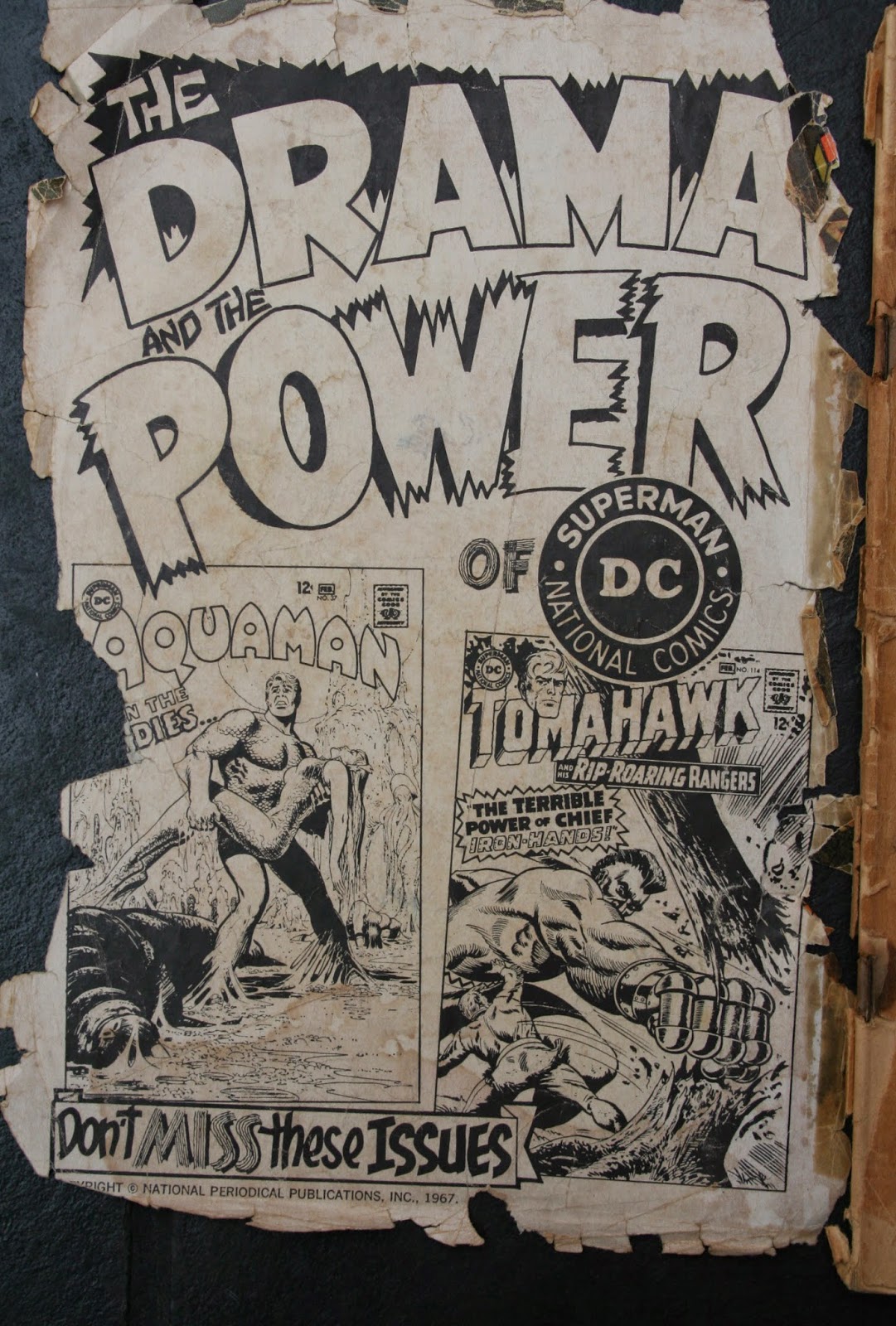 In fact, I spoke with Joe Jusko about Aquaman 37 and we simultaneously blurted out that it was the one cover that we'd never recreate as a painting because it was too good.

I could write a lot more about Cardy, Bat Lash, highlight more covers he did...but this is about what particularly blew me away about his work, what really made me notice him as an artist. I didn't discover Bat Lash until the late 90's...

This is my favourite Nick Cardy issue of all time. For me, it's his best interior art-see Twomorrow Publishing Comic Book Artist #1 for the possible reason that it was so good-of his career. Check out the panels below...the pages are in very poor condition, this is the issue I bought back in the early 80's and I've read it to death. 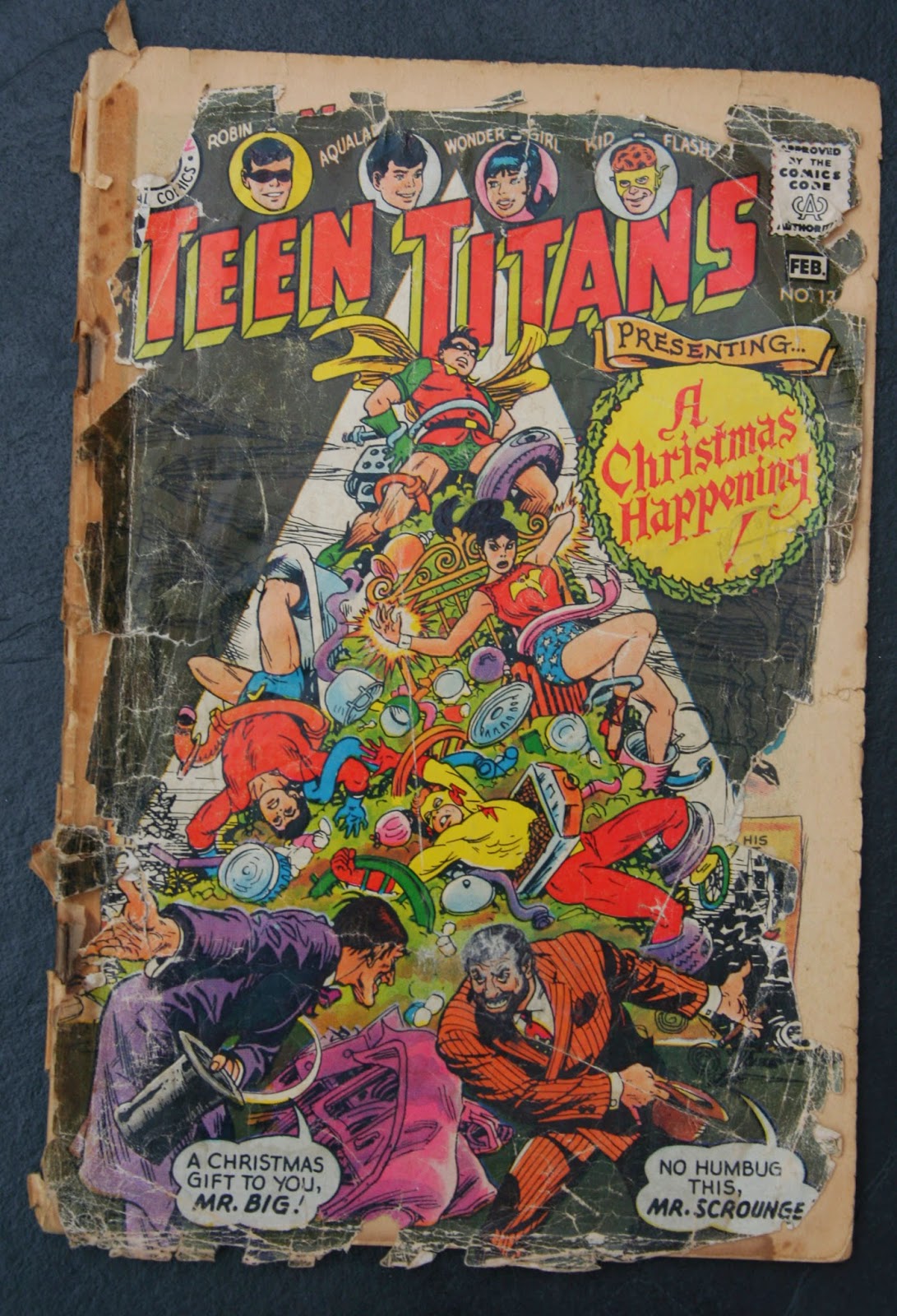 This copy really is wrecked. I'm reluctant to replace it though 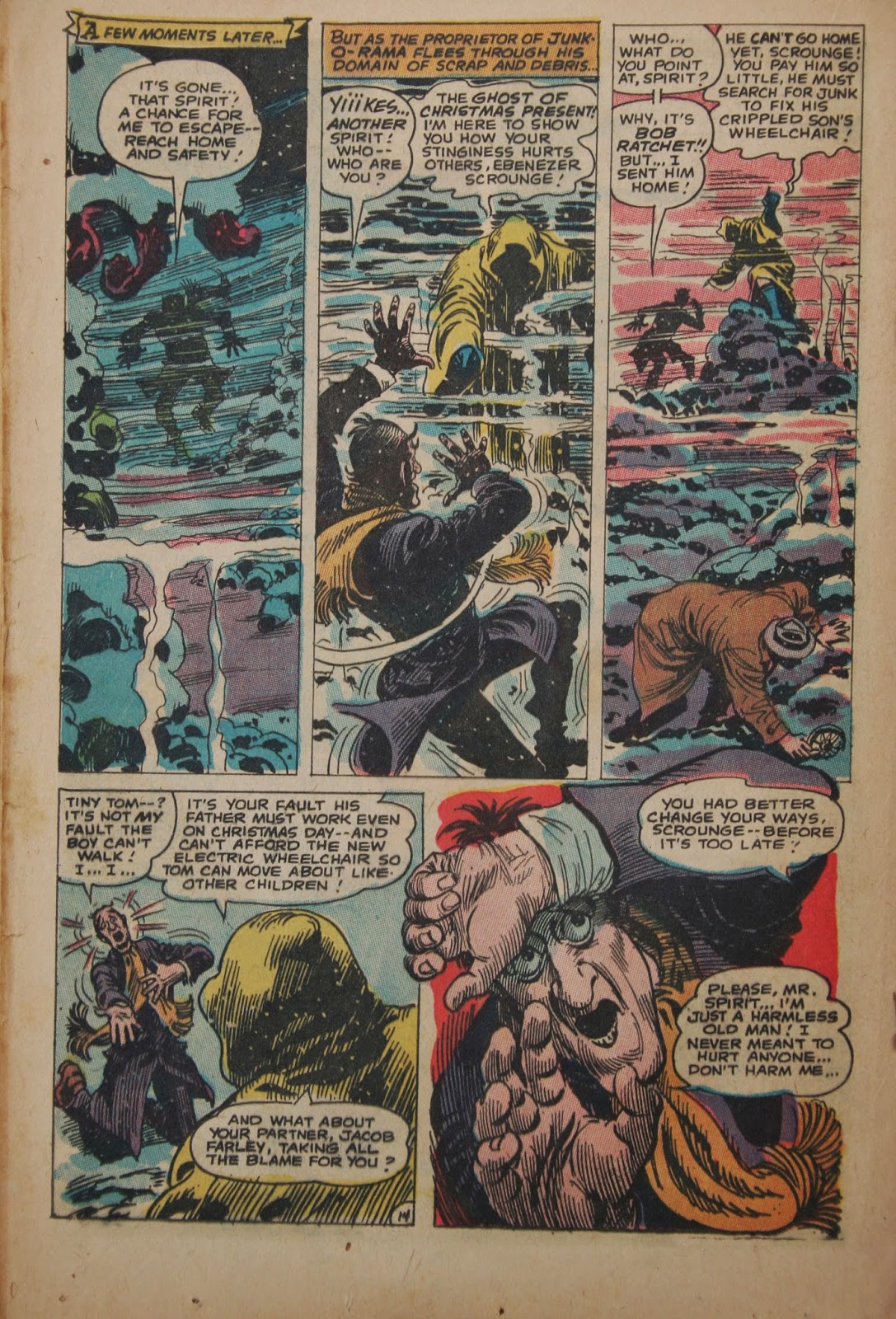 Love the atmosphere on this page and the hooded figure of Aqualad. 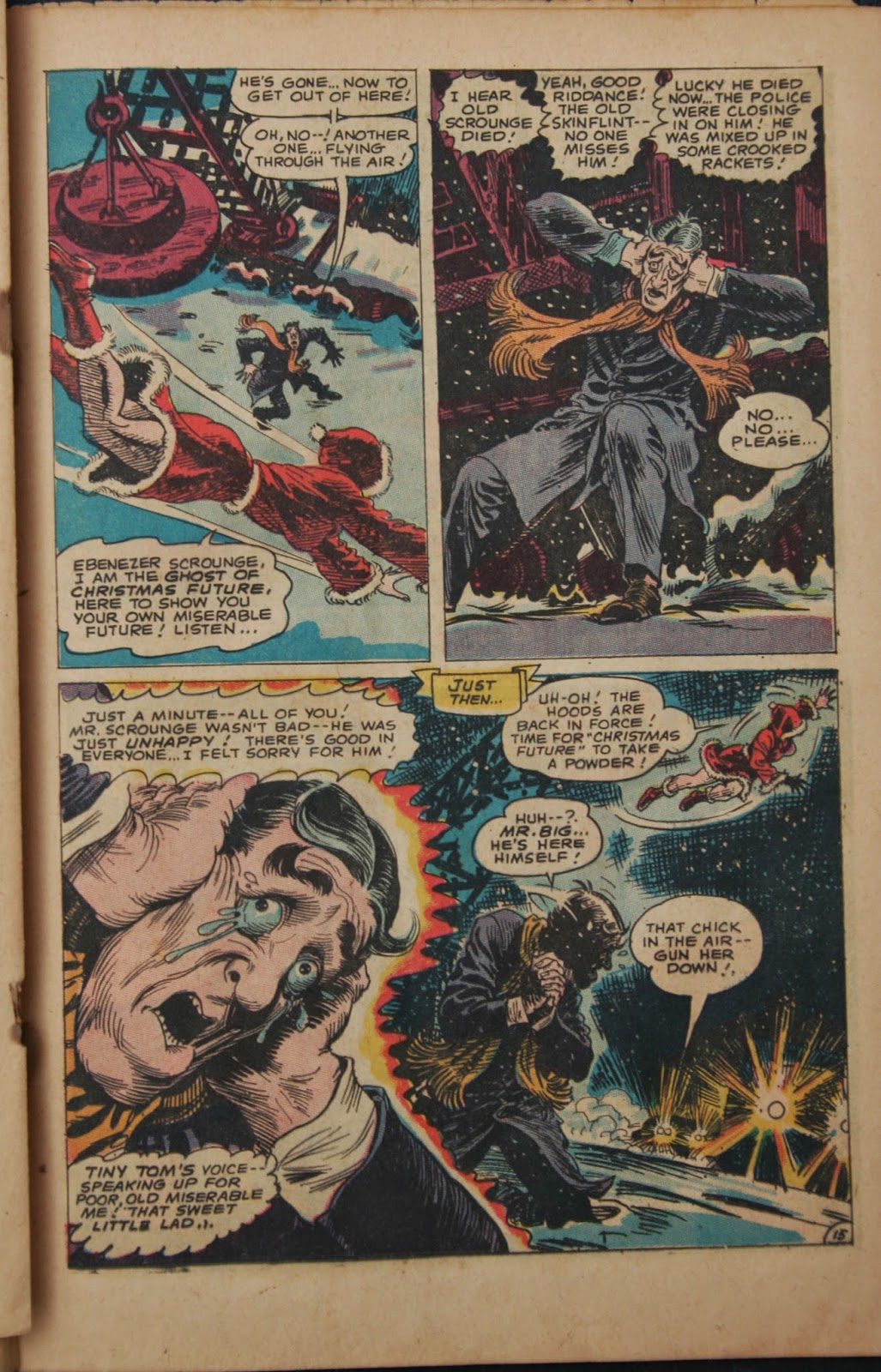 Nice use of shadows and blacks to create a lot of depth in the panels. Sense of grittiness and somehow it feels pretty cold too 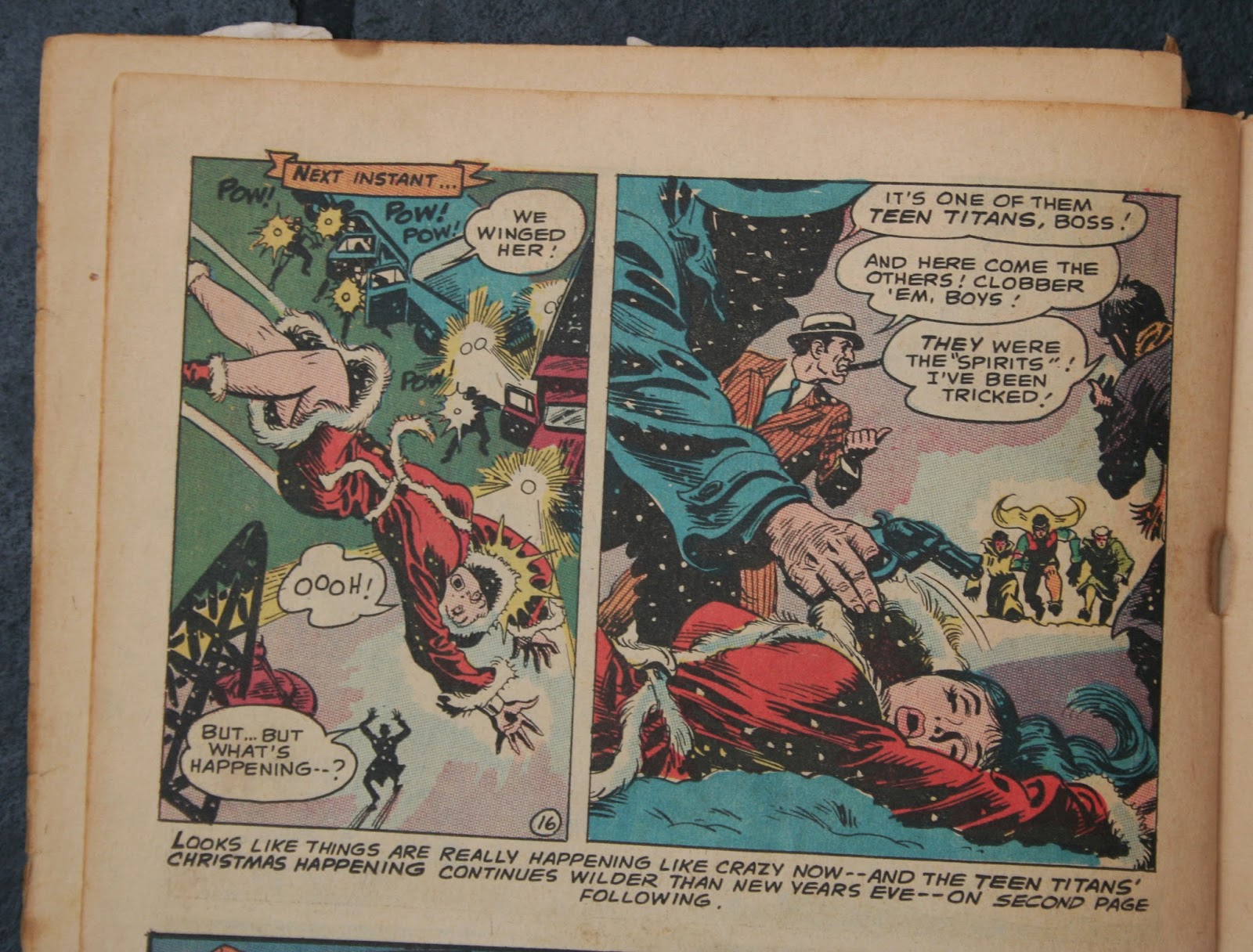 Love that second panel, the figure in the foreground looming over Wonder Girl, it really creates distance between her and the Titans in the distance. 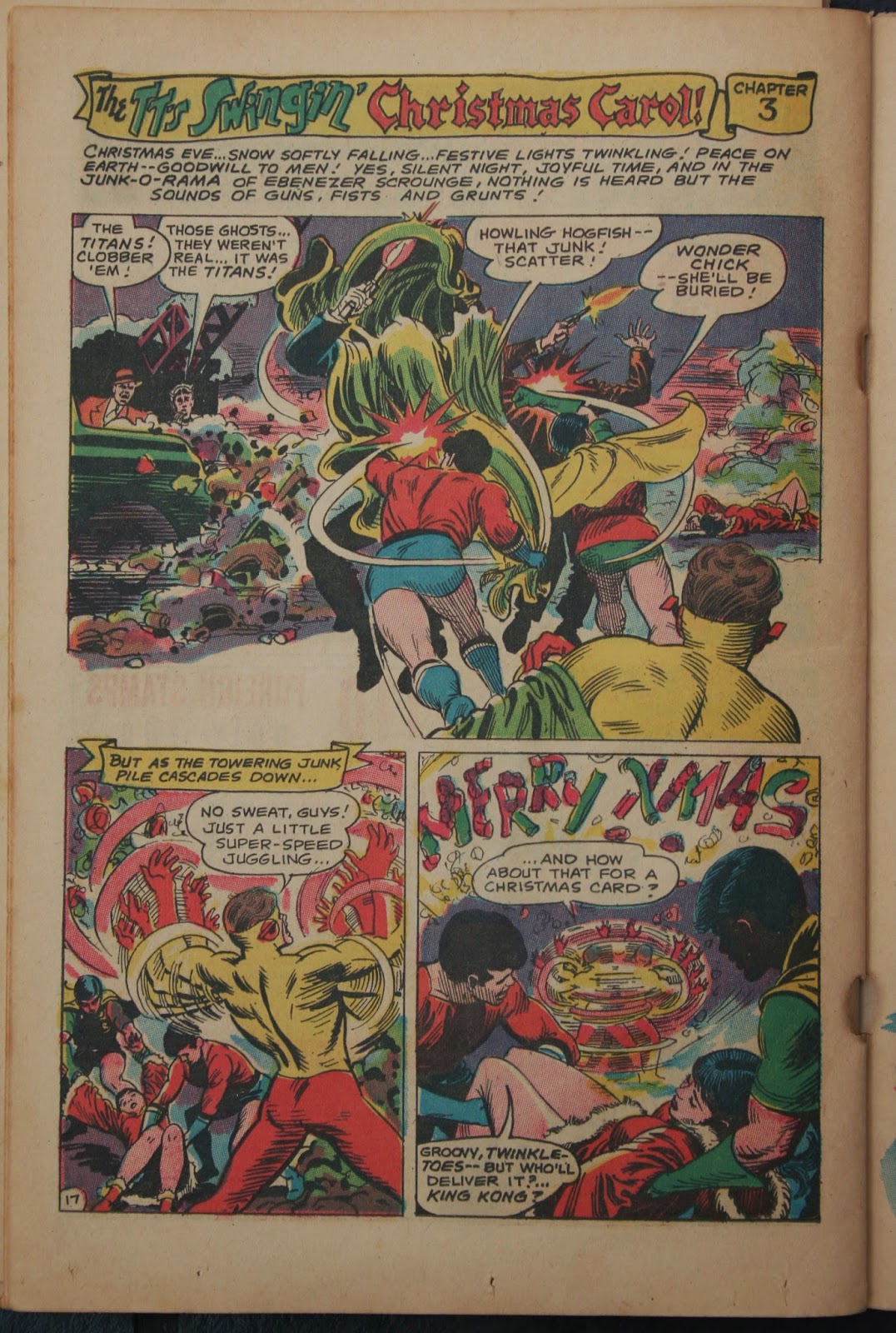 Lot of movement on this page, the eye flies across. 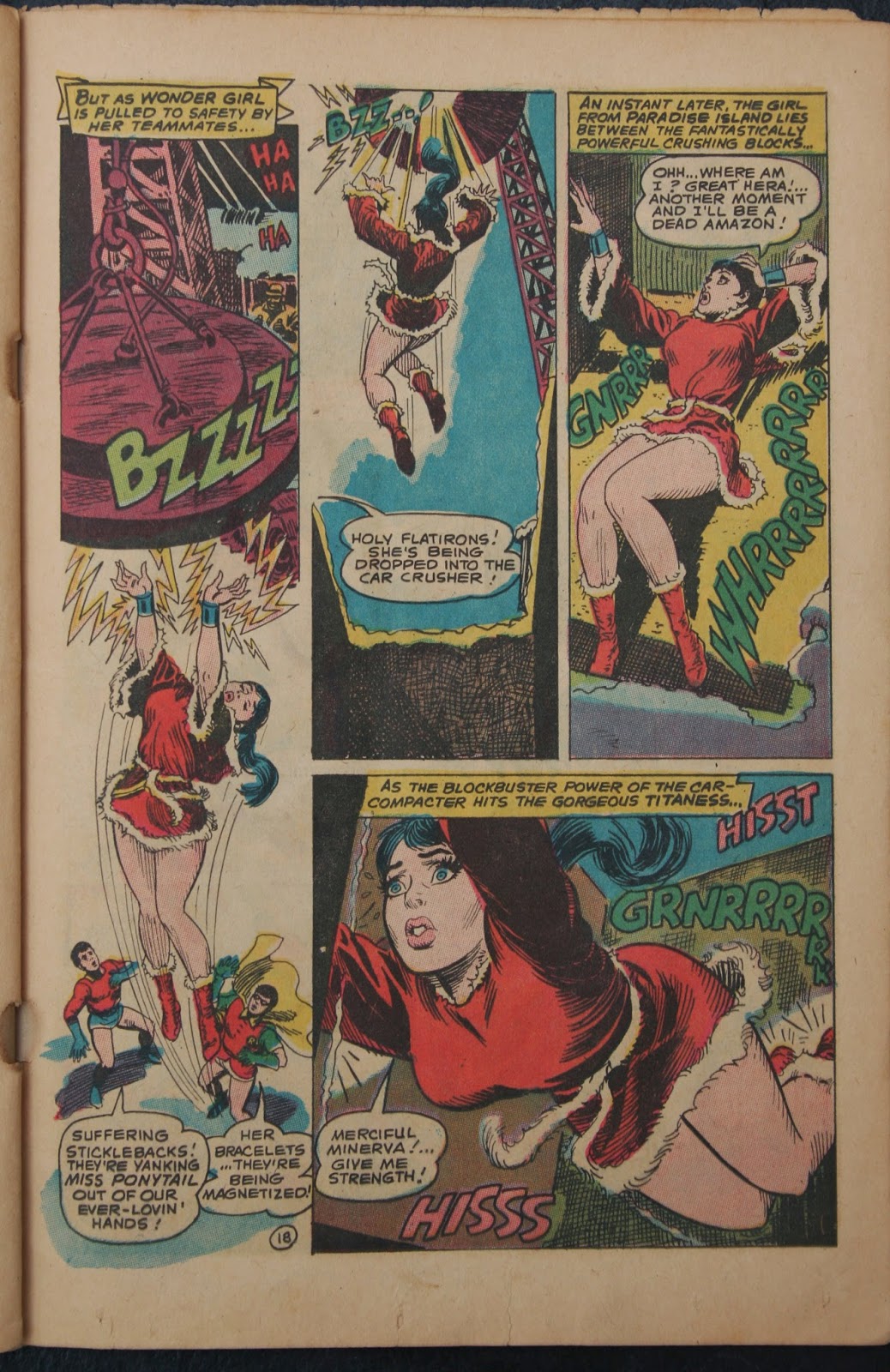 How to draw attractive women without 3000 lines and 10ft legs 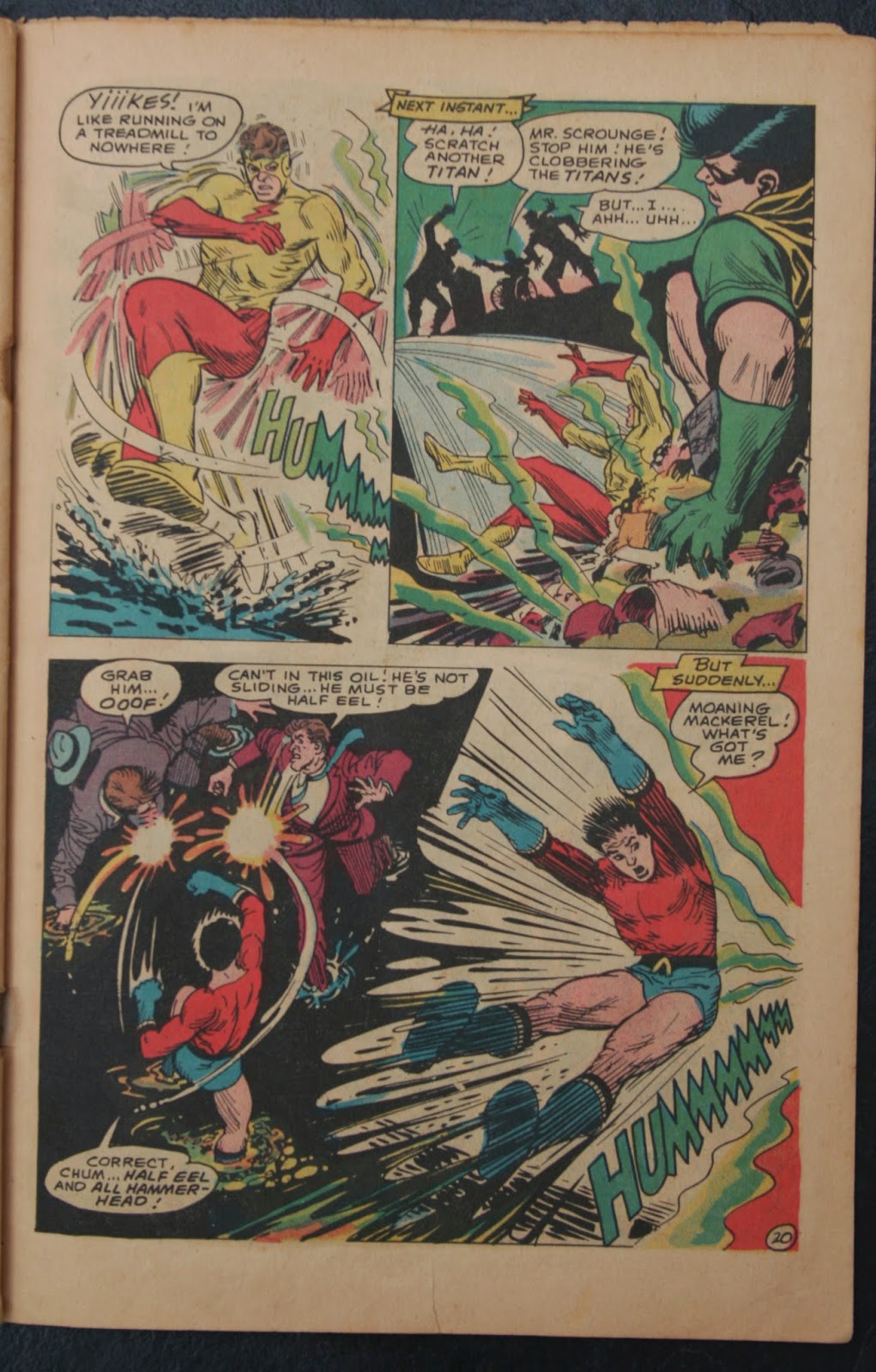 Probably my favourite page from the book. The third panel with Aqualad hitting the goons is a great angle and the way he's sucked out of the oil in panel four, love those shapes.


This issue introduced me to Aqualad for the first time. I'm a massive fan of Aqualad, massive. I really don't know why. Probably because of Cardy's art. There were many times when I imagined myself as Aqualad whilst adventuring along the cliffs or the beach near my home.

The script may be a bit corny, but the art is magnificent. I got this issue the same time I discovered the New Teen Titans (issue 5 was the first one I bought, from a newsagent at the bottom of my street)...there'll be a later installment about that.

Check out this ad... 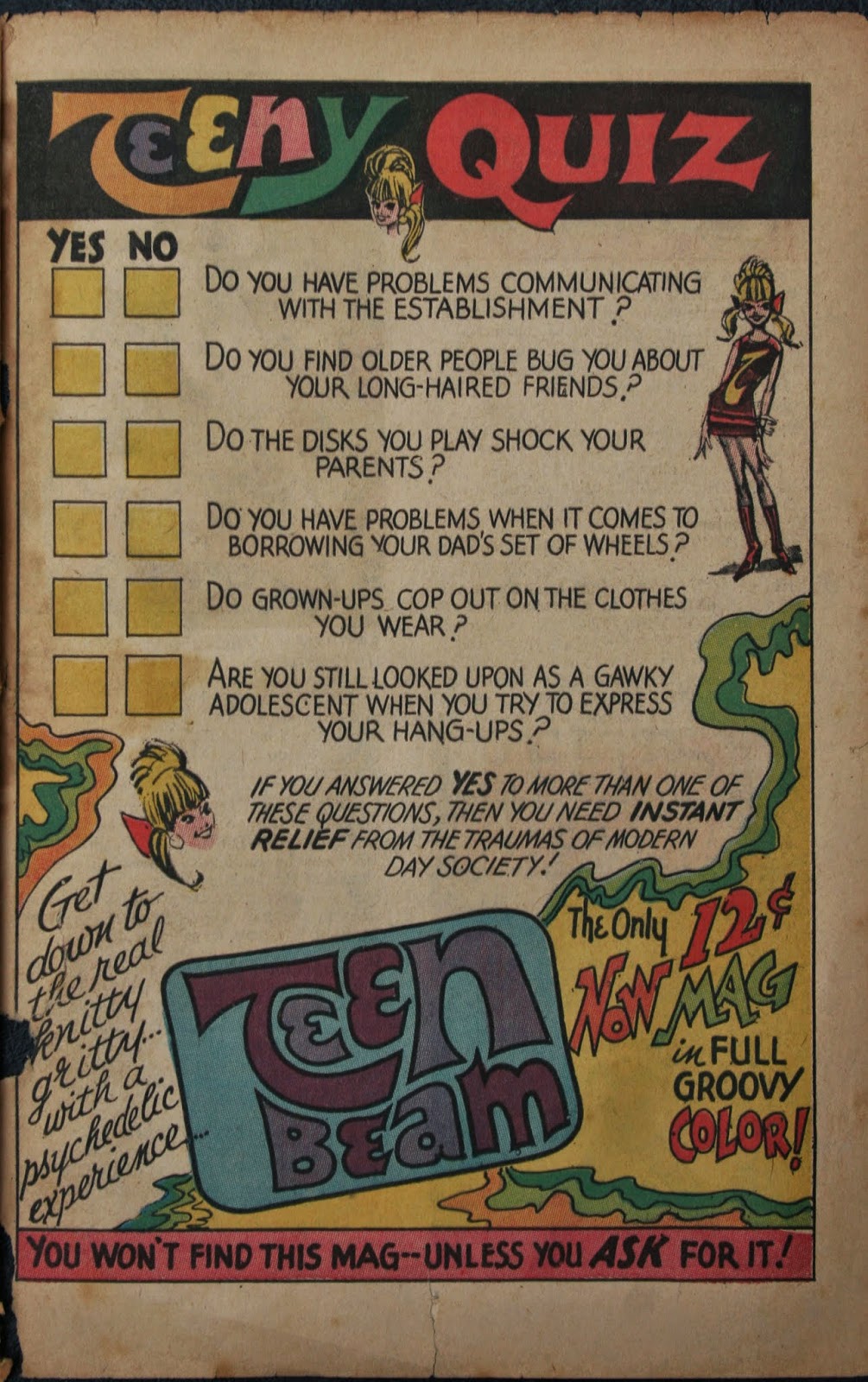 I actually got a copy of this issue from the secondhand book store where I built up my early collection. I've no idea what happened to it. Unfortunately it's increased a lot on value. If anyone knows where there's a poor/fair/good condition copy available for sale, please let me know...