The Generation: Origins is available to buy

It took a while, but my book is available from all the online retailers, Lulu, where it was published, Barnes & Noble, Amazon etc.

Here's a link to an article about the book by John Freeman on DOWNTHETUBES.NET

Also, a signed copy with a sketch inside can be ordered for £20 inc p&P (in the UK) directly from me. So far, I've managed to draw a different sketch in each book. That'll probably change! I'm quite enjoying drawing headshots of my own characters, although the urge to put some characters from the second book in there is growing.

Reviews would be greatly appreciated as this really helps the book to appear more frequently on sites. Also, people are more likely to purchase a copy if there are multiple positive reviews.

Some lessons learned from writing the book:

Don't edit the thing myself. I still know little about the rules of the English language. Professional editors do!

Don't end the book on a major cliffhanger after having not resolving what happened in the first part of the book either.

Have the book edited before I hand out printed copies for people to read and give feedback on! The reason for this is because someone I gave a sample copy to decided to sell the book. I bought the copy myself off Ebay to prevent an unfinished, unedited book from being out in the wild. What made it especially galling is that the person who sold the sample copy couldn't even be bothered reading it. Thanks for that.

I'm currently designing some prints to be used in promotions for the book. I'll post as soon as I get some pencil prelims done. I'm leaning toward using watercolour or gouache for the finished art. I've not worked in gouache for around 25 years, so that'll be interesting.

Finally, I've set up a J.G. Watson author page, so check that out for more frequent updates! 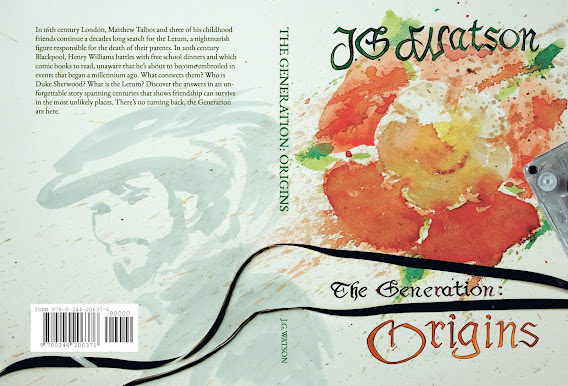 The book I began writing...oh my word, seven years ago this month, is now available to buy, from Lulu alone at this point until it's approved on other sites!

Here's a link to purchase it the book The Generation: Origins

Over the last year the book has been edited professionally which, in my opinion, is an important part of the process. Since May, I've been ordering revised proof copies. The last issue with the book was that the cover art looked like it'd been filtered through a pair of tights (see the printed X-Men covers I did for Marvel for more tight-like printing fails). I've still no idea why as it hadn't looked like that on any of the previous proof copies. Before that, the problem was the title not being aligned properly on the spine. The issue before that was the missing dots after J and G on the cover. You get the picture, it was a long and tedious process.

How to describe the book? It's set in two eras, the 16th century and the 1980s. It has elements of fantasy, sci-fi, teen angst, and, at least in my editor's opinion, is a 'great book'! It'll be the first in a series, it's written in the first person and there are four different characters who the tale is told through.

I'm self-publishing through Lulu's print on demand service, but it'll be available through other online sellers too. It'll be print only, so no Ebook, as I'd prefer to have thieves put some effort into stealing it, if they feel the need, and have to scan 280 pages instead of just clicking a button and nicking it. I know that Ebook theft, in reality, isn't a massive thing where authors lose a ton of sales, but I spent a long time writing the book, and I'd like anyone who robs it to have to at least put a little effort into doing so.

If possible, I'd like people to buy it through Lulu. No, it doesn't have one-click shopping or free postage, but I get eight times the money if someone buys it from Lulu instead of the more convenient online companies. It's a fair chunk of revenue.

The book will cost £13.75/$17.99 - I planned to sell it for less - but the printing costs went up recently, and also, as it's going to be sold through the global distribution market too, so I can reach a bigger audience, there has to be a set minimum price. Still, it only costs a little more than three comic books and will take a lot longer to read.

I'll be selling signed copies and also copies of the book with original sketches inside. They'll be available directly from me, if that's your thing.

Many thanks to Rob Rundle for editing the book. He was very thorough and I learned a lot about the English language and writing from him. We had an easygoing working relationship, which was great. Rob would correct my appalling grammar and punctuation and make suggestions that I was free to use or ignore, chapter by chapter. I think there were only two or three suggestions I didn't go along with throughout the entire process. The biggest changes I made were after his initial read through when he told me that I shouldn't leave the book on a cliffhanger. So, I added four more chapters that resolved the issue and, in the process, altered the entire book. He was spot on. it's now a much better book!

The only issue that created was that I'd already written 70,000 words of book two. Which I then had to delete as a result of the changes made to book one. Book two is now a totally different book (I'd written myself into a corner with a paradox anyway, so it was for the best). I've now completed the first draft of book two and am currently going through it, chapter by chapter, to try and eliminate any continuity errors and terrible passages of writing. Then Rob will let me know what he thinks!

You may be reading this wondering why I've written book two when the first one may only sell five copies. The answer is that I enjoy writing and I can escape to another place when I write, immerse myself in another world that isn't anything like the one we live in today. Well, it has similarities, but it's far enough removed that it's still a good place for my mind to wander about and explore. I used to do that by reading comics, but they lost that escapist element for me a long time ago. It might have something to do with the decompressed storytelling, or the fact that nothing of consequence ever happens anymore. Possibly, it's because I'm unfortunately no longer 13.

I'd like to thank all the people who read the first draft of the book and offered feedback (although, no-one outside of Rob has read the additional chapters that now conclude the book!). The feedback received was valuable and I appreciate all the comments! Especially Peter, who said, 'It looks like art isn't your only talent.' I'd like to thank Ben Le Foe for the use of his name for one of the characters. Also, thanks must go to Russ Payne, who was there at the beginning and has been a great support (and tech guru) all along the ride.

Book Two, 'The Generation: A New England' (working title, it may change, but I quite like it) is a longer, more complicated book. There are also more characters who have their own first person chapters (without checking, I believe there are ten). I can't really say anymore as there are too many spoilers.

I'll be updating this blog more frequently. Good reviews are welcome. Negative reviews will be tolerated and accepted.