Writing a book: Part One, Genesis.

As I've previously mentioned or alluded to, I'm writing a book. To be more accurate it's a series of books that I'm co-authoring with Russell Payne. (read his belated version of the early days of our collaboration here) This is the first in a series of blogs that will take you through the process and development of the first book and will hopefully lead up to it's publication.

First, why a book series and not a comic? After all, my background is in comics and art and not writing. Well, originally it was a comic.

About 8 or 9 years ago I wasn't enjoying working on comics so much and, as most artists and writers do at some point, I figured it'd be a good idea to draw my own series to pump some enjoyment back into things. Lacking confidence to do something alone, I asked my friend Russ if he'd collaborate with me as writer. For some reason we decided to develop a plot involving The Inferior Five. It seemed a good idea at the time although looking back it clearly wasn't ever anything that DC, in their right mind, would ever use. I drew a few pages, showed them to Mike Carlin, an editor at DC and although he liked the pages said it'd never happen.

The next step was to develop our own comedy team and self publish or approach companies with our concept. So we came up with The Randomers. It was a rip off of The Inferior Five that we could easily adapt the script to fit. For example, Daft Cow was our version of Dumb Bunny. We ended up shelving it after a few months. It clearly wasn't a good idea.

The Randomers though lived on. We built the new team around characters I'd, for the most part, developed a long while ago. The comic would now be a mix of adventure, sci-fi and humour, basically something that harked back to my favourite era of comics, the late '60's DC titles. The comedy element was still pretty strong as Russ is, primarily, a comedy writer. Ideally, I think we saw it as ending up as something comparable to Excalibur by Claremont and Alan Davis.

So, every few weeks we'd have a summit (Russ would come round to my house on a Friday dinner time and we'd chat about the comic).

I've actually still got some of the old designs and prelims I did for the book. I think we got as far as me drawing the cover and the about five pages and printing a sample through Lulu.

Some of the characters were made up in short time for the comic and were awful. Others had been around a long while and they're still going to be used in the book series in one form or another. Here comes a bit of history!

Mr. Paniscus. I made this guy up when I was eight. He wasn't called Mr. Paniscus then, he was called Monkey Boy and he was a member of my version of the Legion of Super-Heroes. The look was influenced by Invisible Kid from Legion #206, drawn by Mike Grell (It's funny, there's a panel in that issue where Invisible Kid looks pretty much just like how I did in my '20's). I was really into monkeys at that point in life, the Monkey TV series was on at the time and also, I used to write continuing episodes of a group of intelligent monkeys (never apes) who travelled the galaxy together. Mr Paniscus is a better name than Monkey Boy. Obviously.

Another from that time was The Buzzard. I liked his colour combo of lime green, yellow and red. He was culled, or rather I should say, redeveloped to the point of being unrecognisable for the book.

The Captain, formerly Captain A, previously,(from when I was eight), Mega Boy.

The Fifth Dimension. She evolved from a hero I created at college back in the late 80's called Duke Sherwood. The costume shown here is one of my better ones!

There was a character Russ developed, Lamanda, who has also made it into the book! I think she was called the Bag Lady originally. She wore a Tesco bag as a costume.

At this point in development, The Captain was from Czechoslovakia. We planned to intermingle Czech with English. I can't really talk much about the story here as some elements have made it into the book, very small but crucial elements! 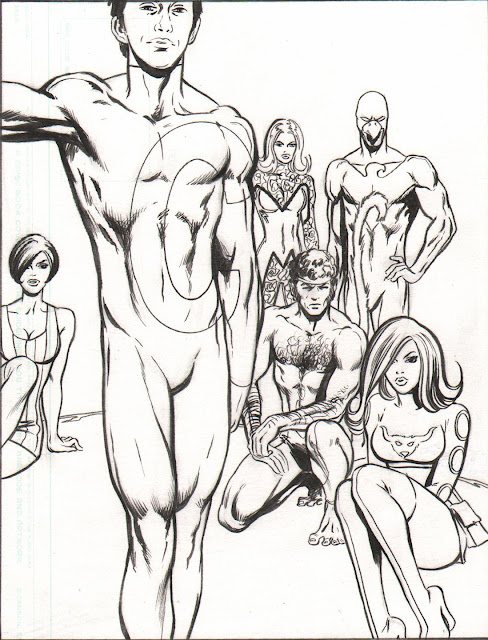 Here's a team shot, if I remember rightly the composition was lifted from a Peanut Butter Conspiracy album cover...from left to right, The Bag Lady, Captain A, background:The Fifth Dimension in her original costume, The Buzzard, knelt: Mr Paniscus and on the right, Bonasus, the revamped Daft Cow (she was still dim and very strong at this point... 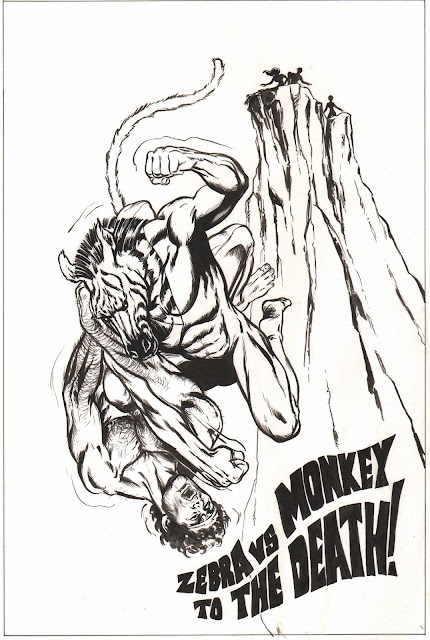 An image loosely based on a Neal Adams cover...at this point I was using reference from the era we wanted the series to emulate, the late 1960's. Here we have Mr Paniscus fighting Johnny Zebra, his archenemy. Johnny was a zebra/human hybrid who rode a mod cycle. A page of interior prelims. The Buzzard can be seen in the top panel. I think Cap has an issue with Bonasus answering her phone in the midst of battle in the last panel. As I've mentioned, there was a lot of comedy still in there at this point. 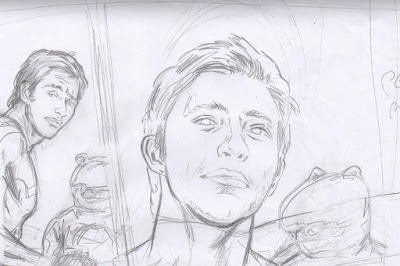 A couple of panels of Captain A with what looks like The Pathetic Shark, he was basically a bloke in a fancy dress shark costume who tried to fight crime...and he's disappearing here. He was a nod to The Pathetic Sharks in Viz magazine. He's long gone! Also, Cap looks nothing like this now...

There was an idea at one point for a comic store retailer to fund publishing the series, combining advertising and suchlike into the book. That fell by the wayside and afterwards time and life took over and the project was shelved for a while.

It eventually dawned on me that there was no need for it to be published as a comic at all. Neither of us read comics anymore, we read books. I enjoy books wheras the last time I read a comic was...probably a decade ago. That's an exaggeration, I have read the Long John Silver titles, reprinted into English and Empire by Kitson and Waid.  And I did buy Avengers Prime although I didn't read that, I just looked at the great Alan Davs art.

So, I suggested that Russ and I co-author the project as a series of books. Russ wasn't keen, he couldn't see how it'd work. Firstly, he likes to write what he wants without interference and secondly, I'd never written anything. Both were valid objectons. But there was also the fact we worked well together as a team and the comic was never going to be published, it'd take forever to draw and I'm not very good at interior comic art anyway. Even if it did make it to publication, comics are so different now to what we wanted to do that we'd never make any money anyway. It would be financial failure. There was also the fact that neither of us cared for comics any longer, well not new ones anyway. Another key to the collaboration was that we could be blunt with one another and not become offended. Even now, after the many insults aimed at one another's writing and the reality of being a co-author, we've not fallen out. I have however got a file on my laptop named, 'My Generation, for when Russ can't be bothered to finish it or refuses to listen to reason or write properly.'

The idea was that we'd write half the chapters each and then cross edit each others work. There was an initial transitional period where we had to redevelop more than we originally intended from the original storyline as we were switching from a visual medium to a more cerebral one and also a few discussions on whether we should write the book in the first person or third person. We both agreed that the superhero idea had to go, it really doesn't work in books. We ended up changing 90% of the plot, at least. Despite that there are a few pages of art I couldn't post here as they depict crucial moments or reveals from the first book.

This change from comic to book took place in 2013. It would be 2014 before any writing actually began.

Next time: Beginning to write!!