I'm very tired after the weekend, more on that in a minute. It was a great convention, probably the best I've attended since the glory days of the Bristol Expo. And it was packed. Often people fudge the numbers for attendance but there were seriously double the number of people there than last year.

I have to mention Mike Grell, what a nice guy. He's been my favourite Legion artist since I first saw his work in SLSH 206 (he signed that copy for me, chatted about it, awesome) and to finally meet him was fantastic. We even managed to talk about art a little as Mike is a painter
too... 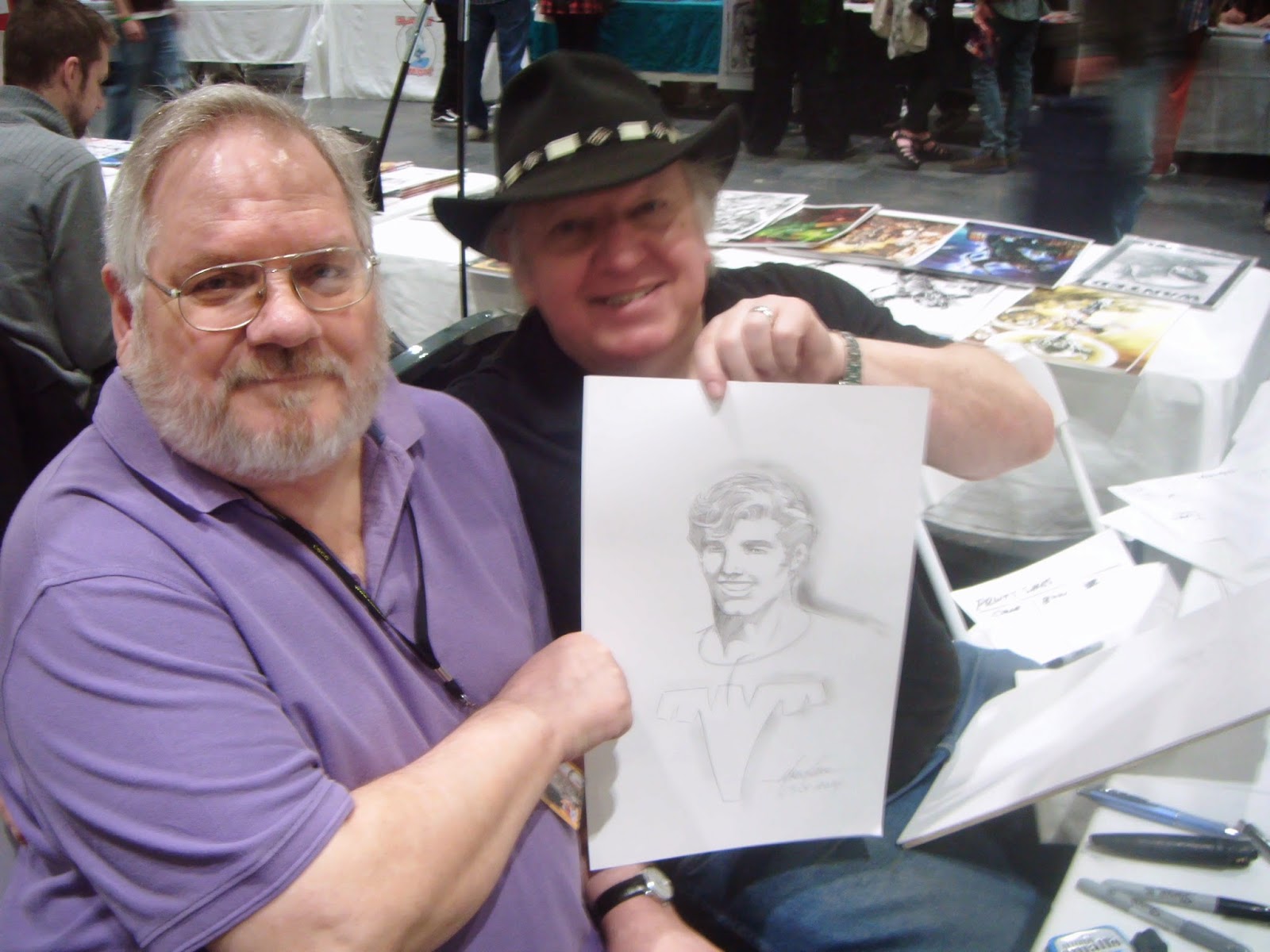 Larry with with Mike Grell

If you want to go to a comic based comic con (let's face it, there are a lot of them that are craft fairs, nothing wrong with that, but comic cons should be comic cons) then LSCC is well recommended. There's expensive original art, cheap original art, cosplay, big name artists and writers, small press, people who sell comic based toys that I can buy for my kids, unlike some, there are even comics ranging from high grade Golden Age to the latest variants...it's a proper comic con. And the staff are helpful, pleasant and visible in their yellow t-shirts. 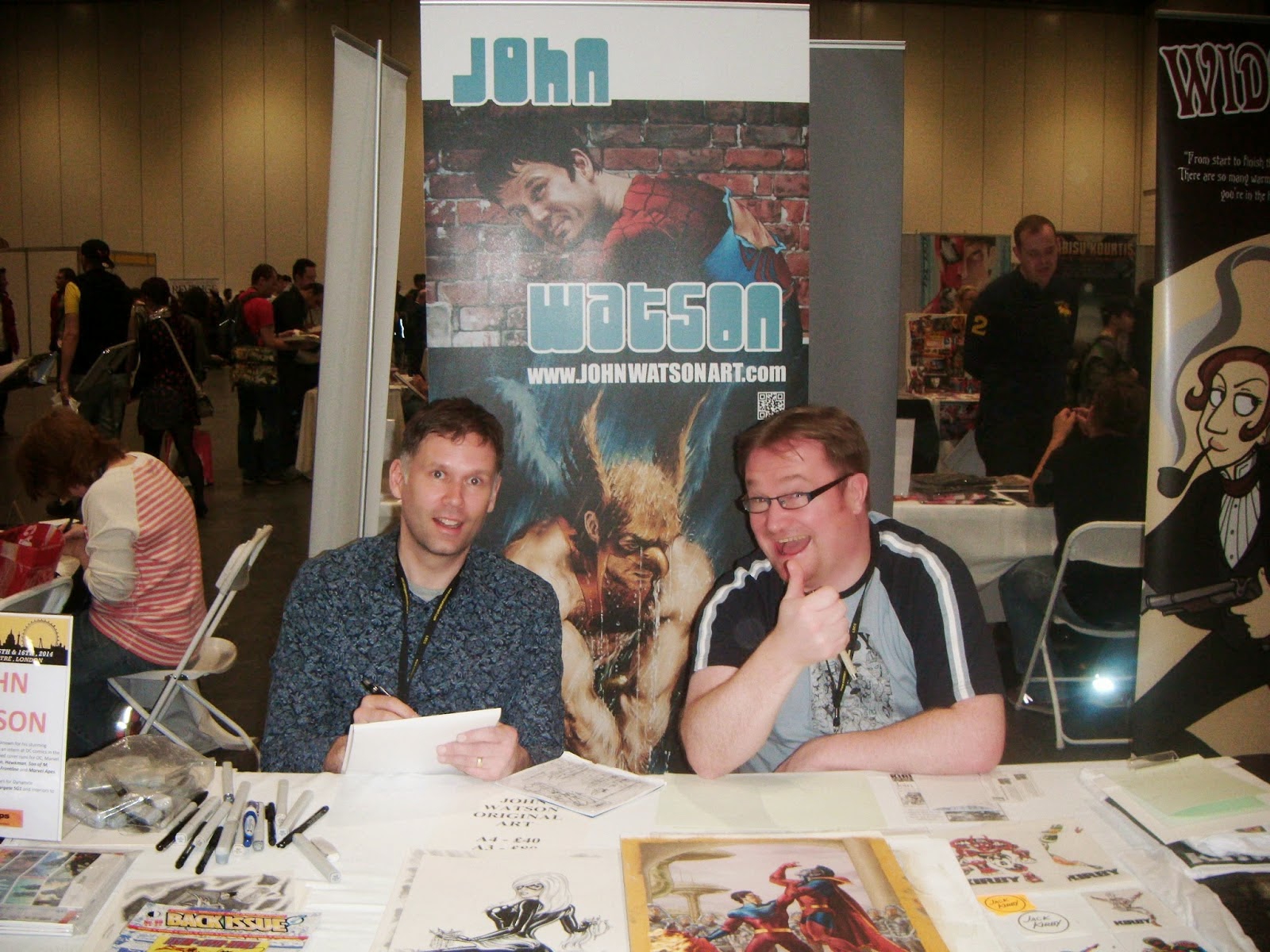 A photo taken on Sunday, my face is sarcastic, I'm not a mentalist. Russ had just awoken

If you're reading this you'll probably have read the post I wrote recently about LSCC 2013...well, this year was a lot more organised....to a point.

I was worried my friend Scott, who was driving down to London and giving us (that'd be me and Russell Payne of the Kirby museum) a lift to the con would be late to set off for the 4 1/2 hour journey. I was wrong to worry, 15.30, he was there. Professional. But was Russ ready to go? No. Instead of packing during the two hours since I'd last seen him he sat around drinking tea...

So it took us an hour to get out of Blackpool. And then we ignored the signs on the motorway telling us that junctions 16 to 19 were basically at a standstill. They really were. I suggested dumping the car and taking the train...panic was setting in.

So, we get to London about 21:30, not too bad considering the traffic. I'd sent some messages to say that we'd meet people at 21.00 at the latest...so we were in the ballpark at 21;30...We found the hotel, for a change there were no problems, we went to our room to drop stuff off, only one bed. It's ok, there was a pull out. So we're good. Not a bad trip and we're almost where we need to be.

Now would be the time to mention that Russ' daughter Chloe came on the trip with us as she was going to a University open day on the Saturday. I think his words were 'We'll just drop her at her hotel (she only told him about it a week before, hence the different hotel) and she'll get the train home on Saturday'. Another rash statement was, 'her hotel is next door to ours'.

Both statements were massive lies.

Scott used his SatNav to find the hotel...it led us to a street that was a hellhole, residential area that was grim, bricks in the street, scary people, we're not used to that in Cleveleys. It's quiet, a lot of dog feces, but quiet. We figured the SatNav had gone bananas so we drove back to our start point and set out again.

It was the right place but the hotel was a block down. I was scared. We all were. But Russ checked her in...and then we set off to find the hotel where we were going to meet everyone.

There were two hotels of the same name around the Excel Centre. Two pubs called The Fox as it turns out too...that's just basics, but anyway...we went to the first one, it wasn't the right hotel. How to get to the other one? The SatNav didn't know. So Scott dropped us at the entrance to the Excel...it was the wrong side. The Excel is massive. And I knew there was  a good chance not all of us would make the journey, Russ is no athlete. (He played 5 a side a couple of times. He didn't get why people were angry with him when he let a goal in the last time he played...he had one hand in his pocket and was eating a Snickers)...We eventually got to the other side and there were railings everywhere...so I just started climbing over them. I have to admit, I got to the hotel a little earlier than Russ and Chloe, as when I saw him trapped, straddling a 4ft barrier I just kept on walking. Was I wrong to leave them? Well maybe. But I had a few grands worth of art in my folder and I had to make a choice. Here's Russ' version of the journey...he's a much more eloquent writer than me since, well, he's a writer...

Scott dropped us off, very kindly insisting on a door to door service despite the fact that travelling two blocks at the Excel Centre in a car means driving in a complex series of one-way spirals.

John had arranged to meet up with people at a hotel that was about 14 miles away from our hotel, so we opted to go for a direct straight line of sight walking route that involved climbing over a line of metal fences. John leapt over them like a gazelle, Chloe managed to dislocate her hip on the third fence and I was left straggling the first hurdle in almost complete darkness as Chloe and John progressed into the distance.

Here's the rest of Russ' blog

So, 22:40, we'd made it (well I had, Russ and Chloe took another 5 minutes or so). It was great to be sat in the hotel chatting with friends, looking at art. Chloe was safe. But I'd suggested that she should stay in her hotel room. I didn't like the idea of the three of us walking that street back to her hotel at 2am. And also, there was Jeff.

Jeff turned up at 1am. I think Russ, and to a greater extent, Chloe regret that deeply.

Got to the convention about 0830. Set up and then the day flew by. I took on way too many sketches and so I was drawing with my head down for most of the day. Russ was sharing the table. He was getting progressively more scared as the day went on and the time came nearer to do the Kirby talk at 5...George, one of the organisers came over just before 2 and asked if he was ready as he was on in 10 mins...Russ laughed afterwards but it took a while. 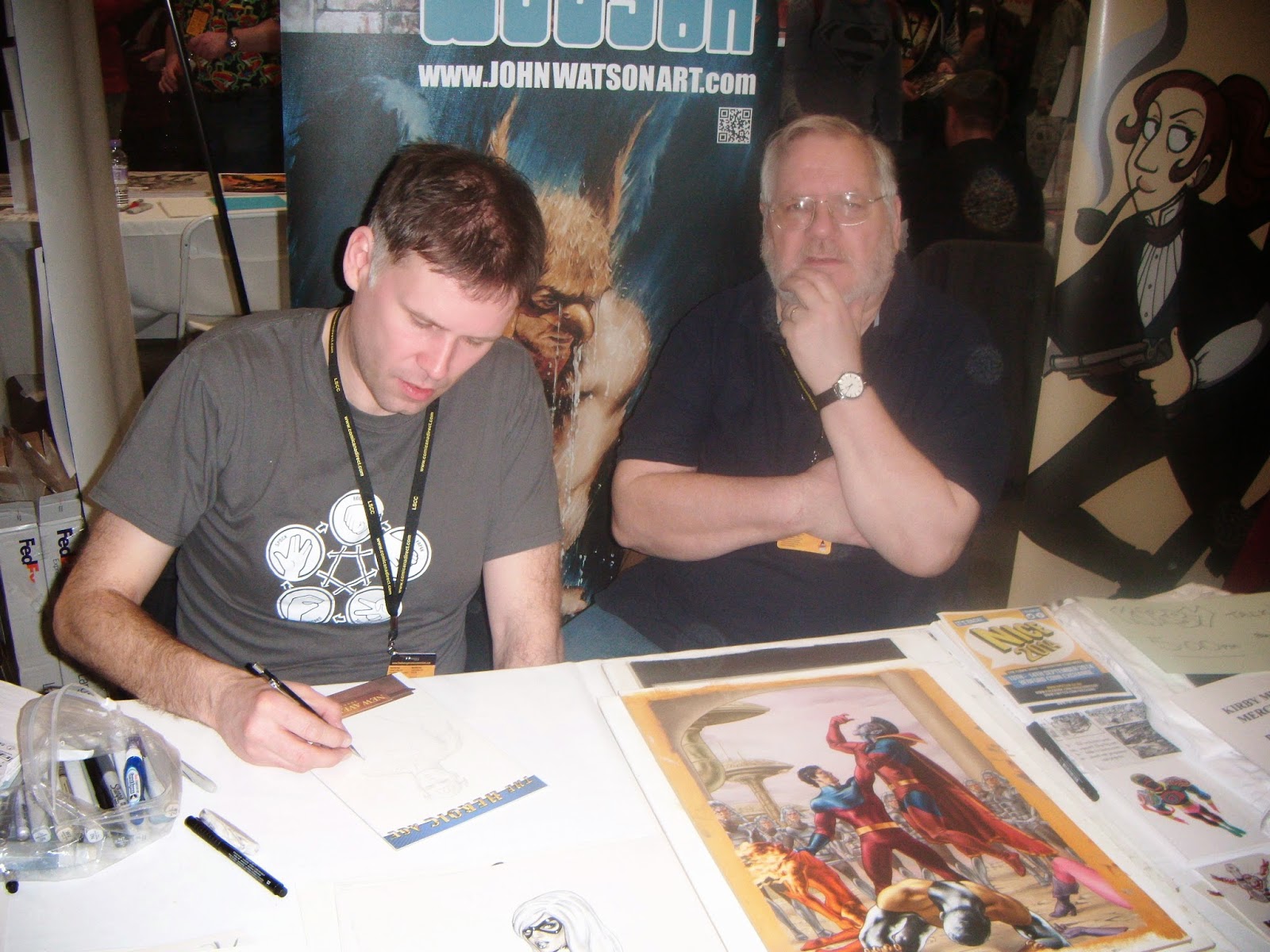 Every so often he'd disappear to find Chloe, get her from the train station, fed her etc. His head was getting progressively redder as the day went on as his blood pressure rose with the combined stress of not having planned his talk and making sure Chloe was ok.

A big thank you to Aidan and Larry who helped me sell art and chat to people (I can't really talk and draw).

Russ was eventually escorted off to do his talk. He looked like he was off to be executed. I had to stay at the table as there was no-one else to watch over it.  Afterwards he was a lot more relaxed. It went well. Secretly, Russ has a massive ego and so the fear was quickly replaced by the joy of performing to a crowd.

Hopefully in that crowd were some people who would learn something about Jack Kirby. Maybe for the first time. Perhaps they were only there as they were tired and there were free chairs but they were educated nonetheless. Forget the arguments about copyright and everything for a moment, the more people who check out his work and are made aware of the ridiculous levels of creativity he had, the better. No-one created more in comics. The man was awesome.

If you're reading this and haven't heard of Kirby then go and research him. Or buy the Fantastic Four omnibus with his work in.

So, as I frantically tried to fulfill my sketchlist, Russ went to drop off Chloe. He'd be 'half an hour'. I knew it was a lie.

One thing about sketching at cons is people bringing over sketches they've had done from other artists...invariably, they're a lot better than what I'm drawing. It really adds to the pressure, nice to see, but sometimes it's like being held at gunpoint.

The con finished at 7pm, a good, long day. I don't think anyone went away disappointed. The cosplayers, who I don't really see as I'm drawing, were everywhere and all seemed happy, the retailers were happy. The organisers and staff were happy, if a little stressed.

On the way out I was introduced to a reasonably famous person and I asked him an inane question. I'm not going to talk about it. In my defense I was very, very tired.

Russ went AWOL for four hours. We had to eat without him. He wasn't returning texts, was he dead? No. But I was genuinely concerned. Turns out he had to take Chloe all the way to Euston because she'd forgotten her glasses and couldn't see any of the signs. On the way back on the Tube he got chatting to a guy in a giant green hat who was plastered after celebrating the Six Nations win and he missed his stop. He'd already eaten when he arrived in the hotel restaurant, he bought a pasty for, I believe, £43 at Euston. So, everything was fine. He got back just in time to join the mockery of my Scott Pilgrim hat. I don't care what anyone says, it's the best hat I've ever owned.

Spent the rest of the evening sat in the hotel bar chatting about comics and football (MOTD came on and there were a few points that needed discussing). Russ fell in and out of consciousness, awakening one time to shout out 'is it green?'

After another night chatting, listening to the birds sing and looking at the pretty cool view of the Thames we had another day that was pretty much as good as Saturday. I spent all day sketching again, stopping only long enough to eat a Jammie Dodger for dinner.

After a final couple of deals on sketches in the hotel bar (thanks Michael, Russ said I'd never sell the Camelot 3000 Morgan piece!) that once again showed my basic ineptitude as a businessman but made people happy, we set off to find Scott.

Deep down Russ loves walking so despite his begging to use the train (for one stop, no, not happening), I knew he was happy to walk the 20  minutes to the other side of the Excel.

Went for a meal in Greenwich with Scott and his friend Sam, great meal and company. But, it was 0215 when we got home.

Still, it was 15 minutes earlier than last year...