Here's another stock cover I did for Marvel a few years back. One thing that works on this piece is the lighting in the sky, I think I caught the look of twilight over a city pretty well. 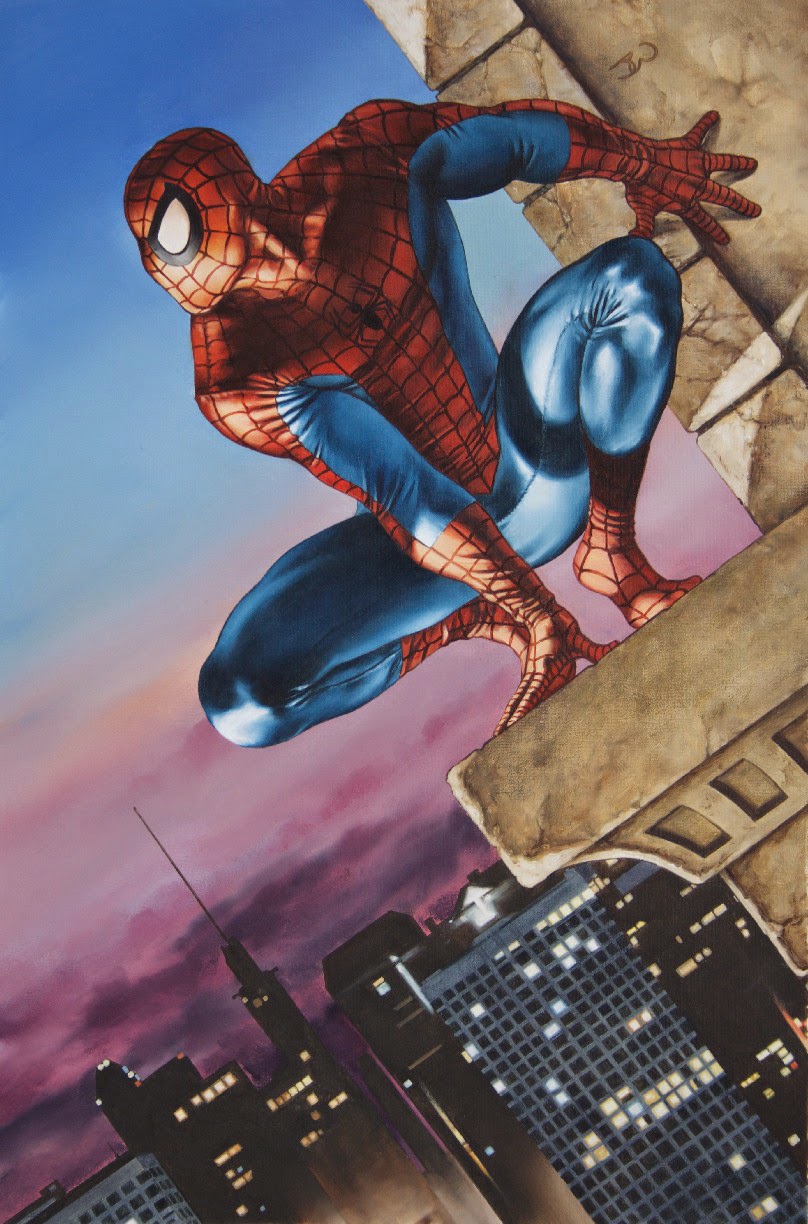 I went for a Romita Sr. Spidey for this cover, a little chunkier than others draw him. Romita Sr. is the definitive Spider-Man artist in my opinion. I read Spider-Man weekly as a kid, British b/w reprints of the American Marvels. But I was never really a Marvel Comics reader, it was all DC.
I did look at the odd issue, I had a friend at school who read all Marvel and no DC, we recommended titles to each other once in a while. I did buy Excalibur, the only Marvel title I ever reserved each month...it was the covers that drew me into that series, really clever and funny. But, on the whole, I never read Marvel...there is a point to this, it's not just a pointless tangent, bear with me...

I left collage and started my first job in the design field. I realised that I wasn't good enough, quit, and enrolled on a foundation art course, paid my fees and learned to draw. I got into painting, fine art, French Romantics, Rembrandt.,,and left comics behind.

One weekend, on my way home from University I had a few hours to kill inbetween train connections in Birmingham, and came across a comic book shop. I saw an issue of the Flash with Quicksilver on the cover (well, he was called Max Mercury now), the old Quality Comics character. I bought it and it was good. Mark Waid was the writer. I went back and bought some other issues. On the way back to the train I came across a second hand book store with comics in the window...they had old British Marvel comics, all in b/w for 5p each. I filled my rucksack. And I was introduced to John Romita Sr.

And this is the point really, I first saw his art as an adult and it was very different from seeing an artist for the first time as a kid. I was now educated about art, I didn't rate an artist because they were drawing my favourite character...and Romita blew me away. Deceptively simple, beautiful characters, stylised to a point, dynamic storytelling. As I stated near the beginning of this blog, the best Spidey artist. Ditko, I like what he did, but I prefer Romita. Love the Gil Kane Spidey, probably put him second, Andru and Esposito, maybe I'm biased because that's the Spidey I read as a kid...but it's a great incarnation.

If you've never read the classic Romita/Lee Spidey then give it a shot, in an older paperback or collected edition if possible to avoid the inevitable garish and uncomplimentary digital recolouring... 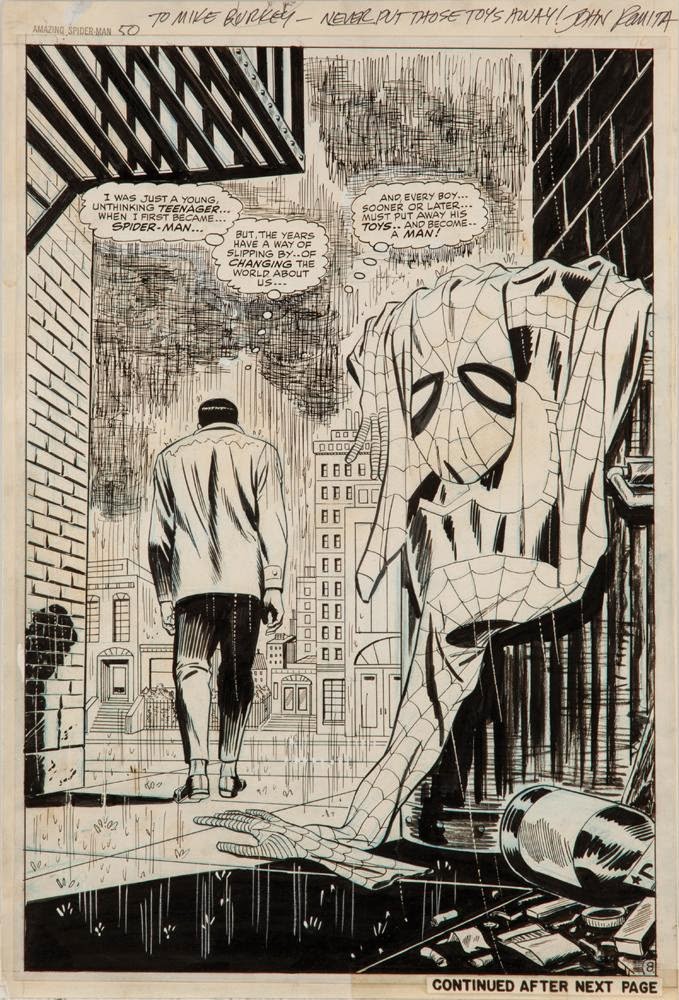 A page from Spidey #50. An image used in the movie and in countless comics since 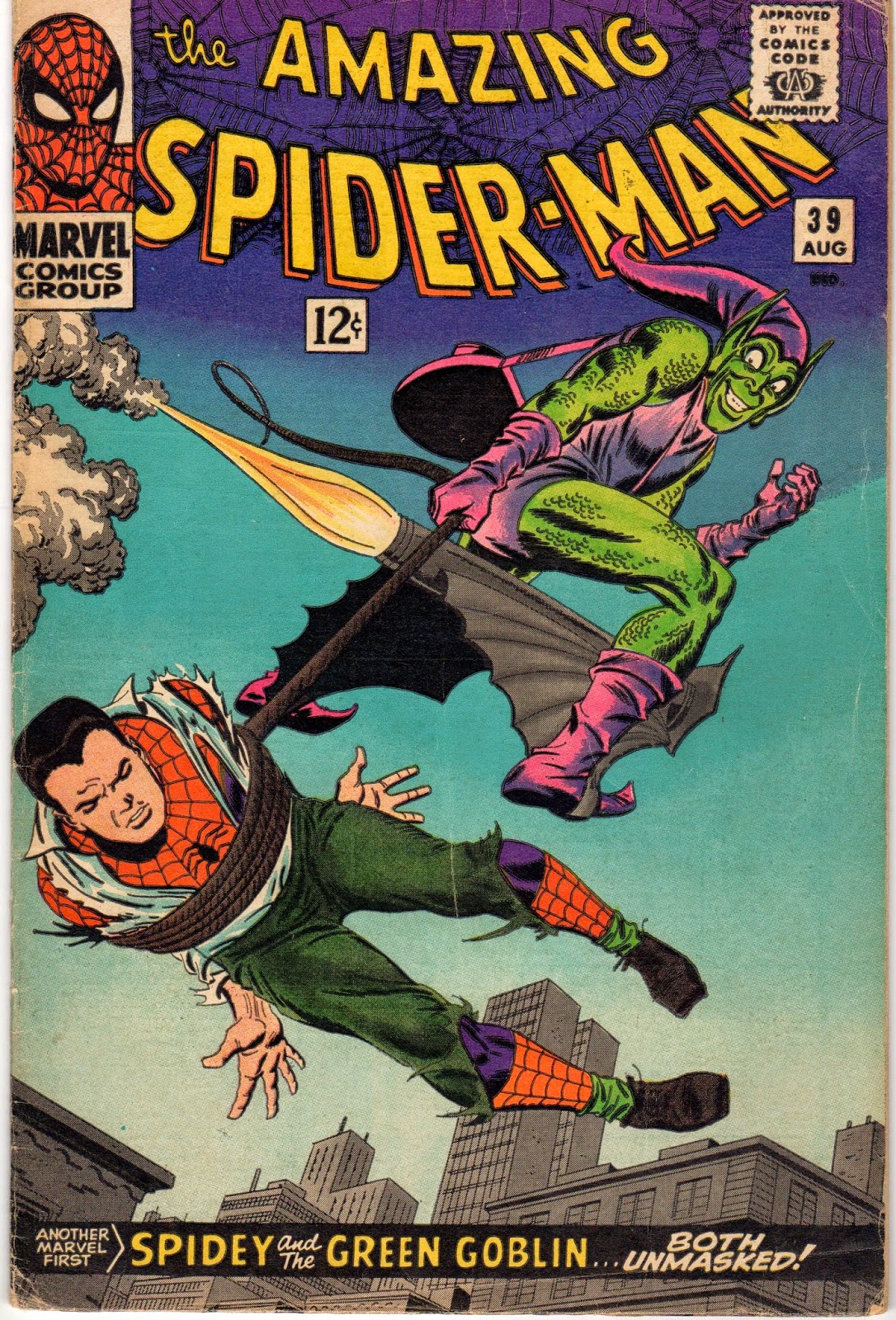 I include this cover as I actually did a painting of it as part of my degree show at University. It was 8ft by 6ft and had me as Peter Parker (some things never change)...last I heard it was still hanging in the University dining room. I may have a photo of it somewhere...

A the same time I discovered Neal Adams' Marvel work, John Buscema, Walt Simonson's X-Factor and Thor and the Byrne/Claremont X-Men...I'll talk about all that another time.


*I've mentioned this before to a few people. In late '91 I was in the final year of my HND in graphic design and it was time to sort out a work placement, or internship, at a company, a local design or advertising agency ideally. I hated the course by that point. I'd enjoyed the OND and figured the HND would be more of the same. It wasn't. Anyway, I applied to Marvel Comics, DC Comics, Marvel Uk etc, you get the picture. And DC wrote back to say that if I could cover my own expenses then they'd be happy to let me do my work placement there, in New York. So I got my 21st money early and funded the trip. I'd never been away before on my own, never flown anywhere. I was naive and clueless. The Y on 41st and Vanderbilt was where I'd be staying...it was pretty terrifying. I stayed one night, a bloke asked if I wanted to come to his room. There was no hot water in the communal showers...you get the picture...

During my first day at DC I was approached by Eric Kachelhoffer who asked if I'd like to stay with his family (as the Y wasn't the ideal place for me to be). I jumped at the chance. For the next 2 months I lived in Mineola on Long Island and got the train to Manhattan each day with Eric and sometimes Bob Rozakis (The Answer Man) who I was working under for the most part, during my time at the company.

I worked with some really talented and interesting people at DC, John Wren, who'd worked at Charlton with Giordano, Ditko and Aparo. Bob LeRose who'd worked with Lou Fine and Neal Adams at Johnstone and Cushing back in the early 60's. I basically settled into a working life at DC, never doing anything touristy at all.

It was a great couple of months. I was shifted around a little, one day I'd be photographing artwork for reproduction or the archives another I'd be commanding the switchboard. I also got to go through two or three longdraws of original art and send it back to the artists. Brian Bolland Animal Man and Wonder Woman, Bisley Lobo, even a Don Newton Batman splash was hiding in there, must have been there for at least 7 years...I got to meet Murphy Anderson too, a really humble, guy, and a brilliant artist.

But I think seeing the struggles of the staff, the low morale, a lot of negative things really, talented people who were at breaking point after being beaten down for years...it was a different side to the 'wouldn't it be awesome to work in comics' dream. And also, comics themselves just weren't as good as they used to be. Had I grown up or outgrown comics? Nah, I just don't think they were as good as they had been, Anyway, I stopped reading comics.