BATTLE OF THE PLANETS; INFLUENCES CHAPTER 5

Some of my earliest drawings I still have are of Battle of the Planets. Before the 1980 annual came out I'd never seen a still image of the team and as we didn't have videos yet I used to try and draw the characters as quickly as possible whilst watching the cartoon.

I didn't find out until years later that there was a comic published at the time. It probably wasn't available in the UK anyway.

I also had a really cool Battle of the Planets t shirt. It was a nylon white one with the whole of the front an image of the team. No idea what happened to it, or all the other ones I had, Superman, Batman etc.

I was hoping to post a picture of the team I did in 1979/80 here...but it's disappeared. Pity, it was very funny, tiny figures drawn in biro on an A2 piece of drawing paper. I can only find a Spidey and a Batman TV series piece.

For those of you who may be reading this and have no idea what Battle of the Planets is, here's a link to the opening credits. Awesome.

Battle of the Planets intro

Years afterwards I discovered that the cartoon was an edited version of Gatchaman. As a kid I had no idea that One Rover One, the droid, was added in by far inferior American animators. It's pretty obvious really. I still don't know how the series ended, or if it ever did.

Jason was the best character, the one everyone wanted to be in the playground. When I was breaking into comics I got to paint one of the Dynamic Forces BOTP trading cards and it was Jason. I met Nick Barrucci, the publisher, a few years later (the company has since become Dynamite Entertainment), he hadn't realised I was such a fan. I could have done more! 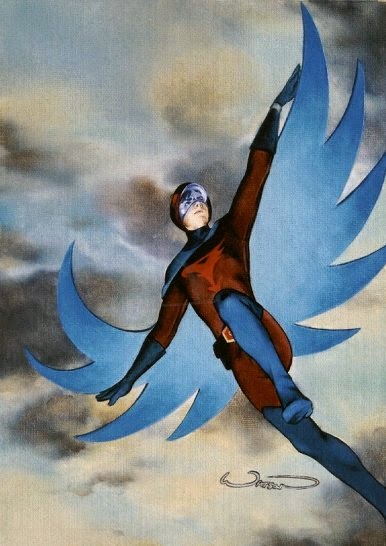 At the time I went over to Dynamite, in October 2002, the company were selling t-shirts of each of the characters so I got one of each, except Jason as they couldn't get the colours right and hadn't produced one. My wife never wore the Princess one... 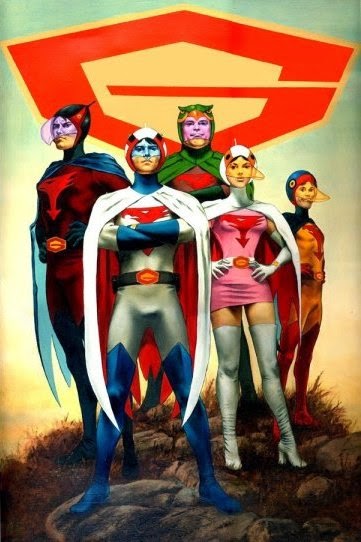 Here's a piece I did for the cover of Incognito Comics, for a catalogue cover I think. Love all the different colours I used for this one. This is, unfortunately, the only copy I have of the art. I was quite late getting a PC and digital set up...and as a consequence I've lost copies of most of my early comic work and all the paintings that led up to that time. I didn't even take photocopies of any of the pencil art (which I sold for about £10 a page to a comic store somewhere near Liverpool!)